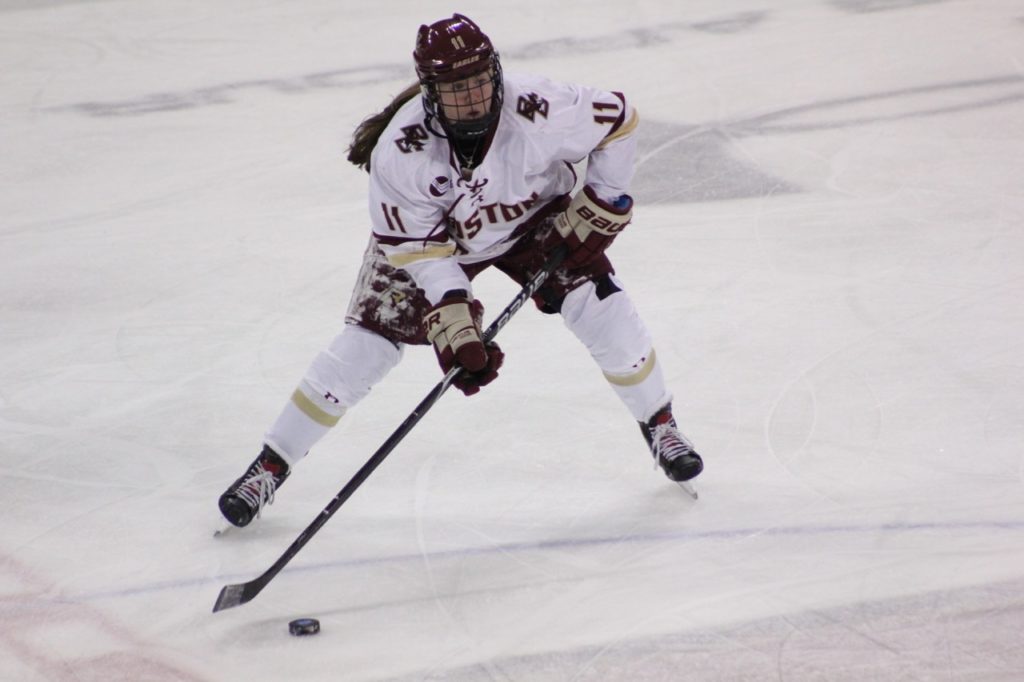 This past Wednesday, Boston College women’s hockey released it’s full 2018-19 schedule. In 2017 the Eagles enjoyed, by almost every measure, a successful season. BC won the Hockey East regular season championship for the fifth-consecutive season, defeated rival Boston University in overtime to win its third-straight Beanpot Championship, and made the NCAA tournament for the eighth year in a row before narrowly losing to Ohio State in the first round.

But for a team that has established itself as a national powerhouse over the past decade, the end of the season still left a bitter taste in the Eagles’ mouths, as the one trophy that matters most—the national championship—eluded BC once again last season. The loss to the Buckeyes dropped the Eagles’ all-time record in the Frozen Four to 1-7 and raised questions about whether BC could ever get over the hump.

Fortunately for the Eagles, this season’s team, despite losing the program’s all-time winningest goalkeeper in Katie Burt, and another pair of key pieces in Toni Ann Miano and Kenzie Kent, has the talent to answer those questions. BC returns Patty Kazmaier award winner Daryl Watts, a trio of Olympians in Megan Keller, Kali Flanagan, and Cayla Barnes, and has restocked the goalkeeper position with Canadian U-18 National Team member Maddy McArthur. Just like last year, the Eagles are positioned to be one of the best teams in the country, and only time will tell if they are able to finally capture the biggest prize of all.

→ BC opens the season up with a pair of road games against Minnesota Duluth. The Bulldogs, who were ranked No. 9 in the USCHO preseason poll, and the Eagles have played six times in the past three seasons. BC maintains a 4-1-1 record in those contests and won both of its games against Minnesota-Duluth in 2017.

→ The Eagles open up their home slate with a contest against Syracuse, which took a 3-1 lead against BC in 2017 before a three-goal second period capped by Miano’s game winner helped the Eagles narrowly escape an upset with a 4-3 victory. BC currently holds a 5-1-1 all-time advantage in the series between the two teams.

→ BC kicks off the conference schedule by welcoming Merrimack to town. The Eagles had no problems with the Warriors last season, winning all three meetings between the two teams by a combined score of 15-6.

→ The Eagles’ first road conference game of the season comes against the newest member of Hockey East: local and historical rival Holy Cross. The Crusaders, who only became a full Division I team in October 2016, will provide another interesting test for BC.

→ Revenge will be on the Eagles’ minds when Connecticut comes to town for the two schools’ first meeting of the season. In 2017, despite failing to win any of the two teams’ three regular season meetings, the Huskies upset BC, 4-2, in the Hockey East Tournament semifinals, preventing BC from winning its third-consecutive conference tournament

→ The long-standing rivalry between the two Comm. Ave. schools reignites. The teams always seem to play each other close, and last season was no different. Even though BC won three of the four meetings—and drew the other—only an overtime winner by Miano separated the Green Line opponents in the Beanpot final. This season, the Terriers will undoubtedly give the Eagles another fierce test despite losing Victoria Bach, Hockey East’s leading scorer from last season.

→ BC gets its first look at its primary challenger in Hockey East when it travels to take on the Huskies just after Thanksgiving Break. Northeastern was ranked No. 8 in the USCHO preseason poll and was just one of two teams to best BC during Hockey East play in 2017.

→ After a month off, the Eagles resume the Hockey East schedule with New Hampshire, who  snapped a seven-game win streak for BC near the tail end of conference play in 2017 and will once again be looking to throw a wrench in the Eagles’ plans to win Hockey East.

→ Despite winning all three games against the Friars last season, Providence is not a team that BC can take lightly. The Friars did receive a vote in the USCHO poll and played the Eagles close in the last meeting between the two teams, with a late power-play winner from Watts being the difference in a 3-2 contest.

→ BC starts its quest to win a fourth-consecutive Beanpot with a trip to rival Harvard, another team that received votes in the USCHO poll. The two teams haven’t played in the last two editions of the local tournament, but the last time they faced off in 2016, it wasn’t particularly close, as BC comfortably won, 8-0.