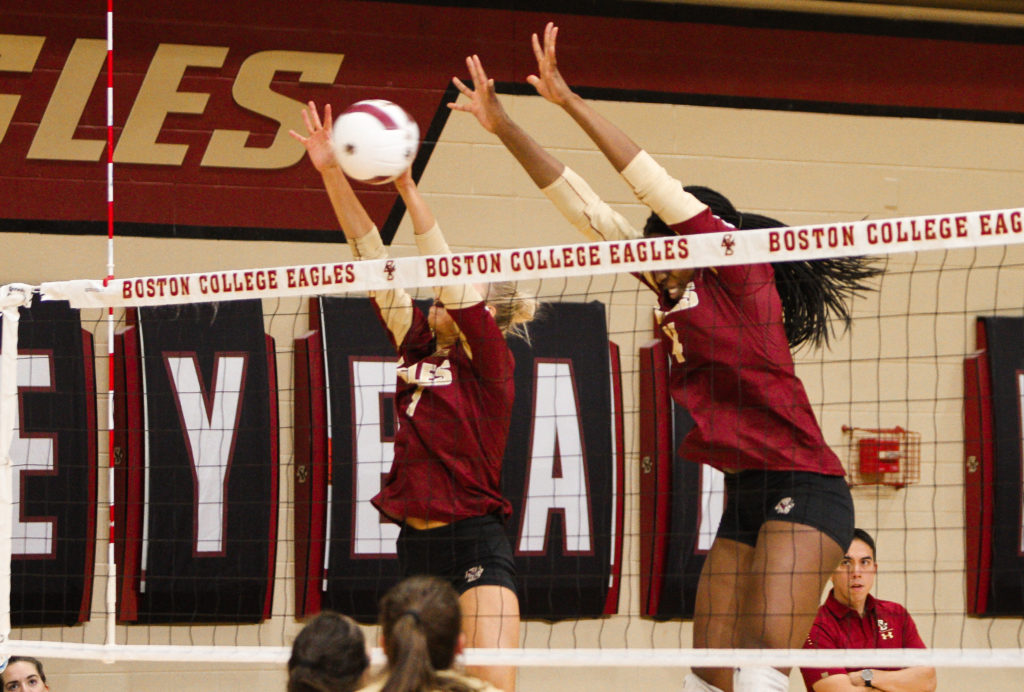 Strawberry Impresses, but Eagles Fall in Straight Sets to Duke

BC played a clean game against Duke under the charge of freshman Jewel Strawberry, who paced the Eagles offense. Kennedy’s players showed excessive attention to detail and error minimization, committing just one service error–the fewest in a match all season. While the game was impressive on paper with the Eagles hitting at a .127 clip (35 kills and only 21 errors in 110 total attempts), the Blue Devils ultimately outplayed BC with an impressive defensive effort. Duke recorded 13 blocks to the Eagles’ four and coupled the impeccable defensive play with a .350 hitting percentage, proving itself as BC’s toughest opponent of the 2018 campaign the 3-0 win.

Clearly boasting ever-growing confidence, BC stepped out on the court with the intent to shake the recent slow starts to games with a quick opening salvo. The Eagles veered from their previous pattern of reserving fast, consecutive points for the games’ back halves, jumping to a 3-1 lead early in the first set. Almost fueled by the notorious Cameron energy, BC fed off this early momentum and doubled up on the Blue Devils 8-4, following an ace from Amaka Chukwujekwu. Duke had a response, though, ultimately tying the set at 11 and then proceeding to take the lead behind a mini run. The Eagles were slow to respond, and Duke finished off the 25-21 victory with a two-point run.

The second set mirrored the first, with an early BC lead prompting a Duke timeout. The break proved beneficial for the Blue Devils, as they returned to the court and embarked on a 6-2 run, this time forcing an Eagle timeout. The game saw yet another shift in score after the regroup, with the Eagles harnessing a narrow edge 17-14, due in large part because of an impressive showing from Strawberry. The back-and-forth nature of the set continued as Duke took advantage of three consecutive BC errors to regain the advantage. The two teams traded leads over the next 12 points, with Duke ultimately taking the set, 25-22.

The Eagles’ game quickly fell apart in the decisive third set as they conceded an initial narrow lead to Duke. The gap widened with a Blue Devil 5-2 surge, forcing the Eagles into an early timeout. Strawberry came out of the regroup with three consecutive kills, narrowing the Duke lead to 16-12. Duke responded in kind and flaunted its aggressive offense with a 6-1 run, also recruiting its impeccable defensive skills to hold off BC points. Tensions eventually soared as the Eagles challenged Duke’s 22nd point of the set to no avail, and a late BC charge would prove too late. The Eagles fell to Duke 25-17 in the third and final set, suffering their first sweep of the 2018 season.

The loss was a setback, but BC is still ranked fifth overall in the ACC and off to an excellent start. Although it experienced its first conference loss of the season, this Eagles team has proven its ability to navigate tough competition while evolving and adapting its style of play. Despite the loss, BC can likely extract confidence from its decreasing errors and stronger starts to games.