Home » BC Falls Twice to Minnesota-Duluth in Season-Opening Series 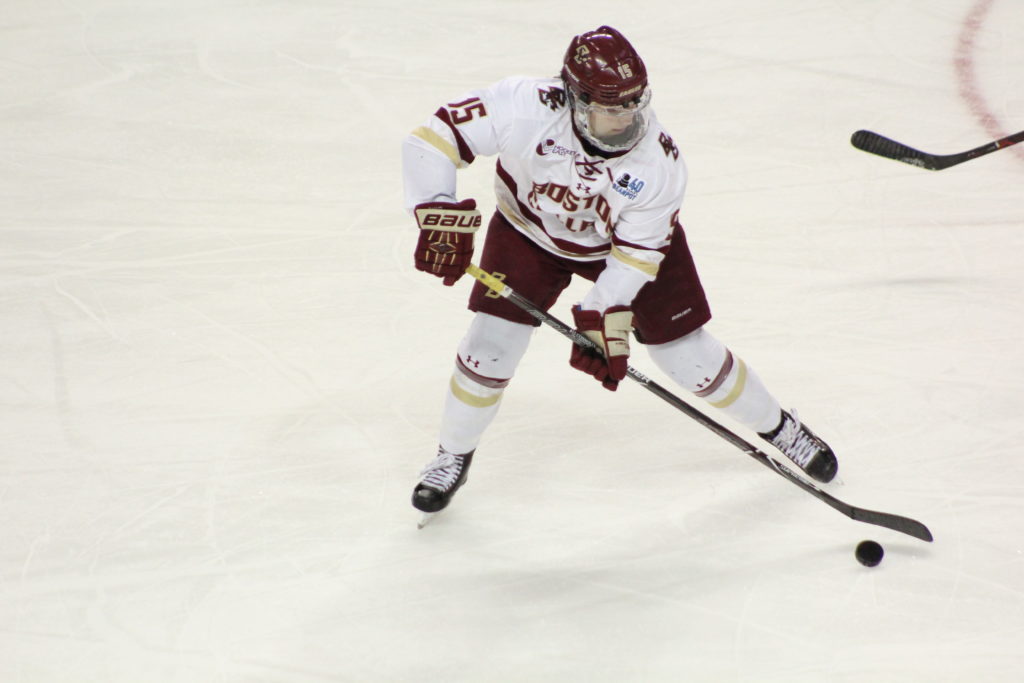 BC Falls Twice to Minnesota-Duluth in Season-Opening Series

In 2017, Boston College women’s hockey didn’t suffer a defeat until the ninth game of the season. The Eagles went on to fall just five times in 38 games, losing consecutive games just once—at the end of the year. BC was simply dominant in regular season play, thriving behind an elite offense that routinely cleared four goals a game.

The season even started with a pair of wins over then-No. 4 Minnesota-Duluth, rolling behind a combined 8-4 score line. So, with three Olympic defenders returning and plenty of optimism surrounding the program, a road trip to face the Bulldogs for two games at the beginning of the year for the fifth season in a row seemed like the perfect place to make a statement.

Instead, the Eagles were swept out of Minnesota, dropping both games by score lines of 4-2 and 2-1 and returning to Chestnut Hill with more questions than answers. It was the first time since 2012-13 that BC (0-2) has opened the year with consecutive losses, having enjoyed tremendous success each of the last few seasons.

The No. 9 Bulldogs (2-0) opened Saturday afternoon’s 2-1 win with a two-goal first period that withstood the test of time, and used a comparable two-goal third period on Friday night to take a 4-2 decision. The Eagles, who received first-place votes in the preseason poll, suffered several defensive lapses that proved too much to overcome. It was a surprising setback for BC, a team many expected would take another step forward with bolstered defensive corps. The loss of goaltender Katie Burt to graduation was a big blow, but head coach Katie Crowley had expressed confidence in her underclassmen replacement Maddie McArthur.

McArthur was greeted rudely in the second game as UMD came out firing. The Bulldogs, undoubtedly building off of Friday’s win, opened with an impressive level of intensity. It took just three minutes and 33 seconds for them to beat McArthur and take what would prove to be a decisive one-goal lead. Maggie Flaherty’s initial shot was turned away by Eagles defenseman Serena Sommerfield, but the puck bounced to Ryleigh Houston, who managed to corral the rebound and score from the slot.

Then, 13 minutes later, the Bulldogs doubled their advantage while on the power play. It was one of just three penalties in the game for the BC, but it proved costly. With Cayla Barnes in the box for roughing, UMD worked the puck around, eventually finding paydirt when Flaherty one-timed a pass from Kailee Skinner past McArthur.

That would prove to be it for the Bulldogs offensively, though, as BC made adjustments. After allowing six goals in the first four periods of the weekend, the Eagles kept their opponent off the board for the final two. McArthur turned away 21 shots and was able to deny a breakaway and an odd-man rush down the stretch to keep it close.

BC managed to get a goal back in the second period, scoring on a power play. Savannah Norcross netted her first career goal for the Eagles, finishing a wrister past UMD’s Maddie Rooney. This corresponded with an uptick in tempo and chances for BC, who peppered Rooney as the clock ticked down. The Eagles dominated, taking the final 12 shot attempts in succession, but Rooney and the Bulldogs bent but didn’t break, ultimately holding on for the one-goal win.

The intense ending mirrored Friday night’s game, when the teams traded goals throughout before UMD used a two-goal spurt to erase any chance at late drama in a closely matched game. McArthur did her best, making 31 saves—the most saves in a debut for a BC freshman since 2006.

Tied at two apiece entering the final period, the Bulldogs quickly distanced themselves. Again, it took just three and a half minutes of play for UMD to score. Naomi Rogge set up teammate Sydney Brodt in the slot of the goal, one that would prove to be game-winning. Insurance followed six minutes later, when the Bulldogs found themselves in a 5-on-3 situation after penalties to BC’s Erin Connolly and Kelly Browne. With the large advantage, it was only a matter of time for a goal to come, with Lizi Norton’s wrister from the face-off dot deflecting off a shoulder and in.

The Eagles had chances late, but weren’t able to place nearly as many shots on net as they would the ensuing day. BC went down quietly, failing to take advantage of a power play at the 11-minute mark and then saw Delaney Belinskas hit the pipe in what was its last real scoring opportunity.

The weekend, quite simply, was a disappointment. Yes, the Bulldogs are no slouch—they’re ranked ninth in the country for a reason—but the Eagles didn’t look the part of the fourth-best team in the country. Without any exhibitions, these games were a tough way to start the year, but the problems they revealed should benefit BC moving forward. Last year, it took 23 games for the Eagles to lose two games. The script has been flipped for them this year, and with plenty of leadership returning, it’ll be intriguing to see how Crowley’s group responds.