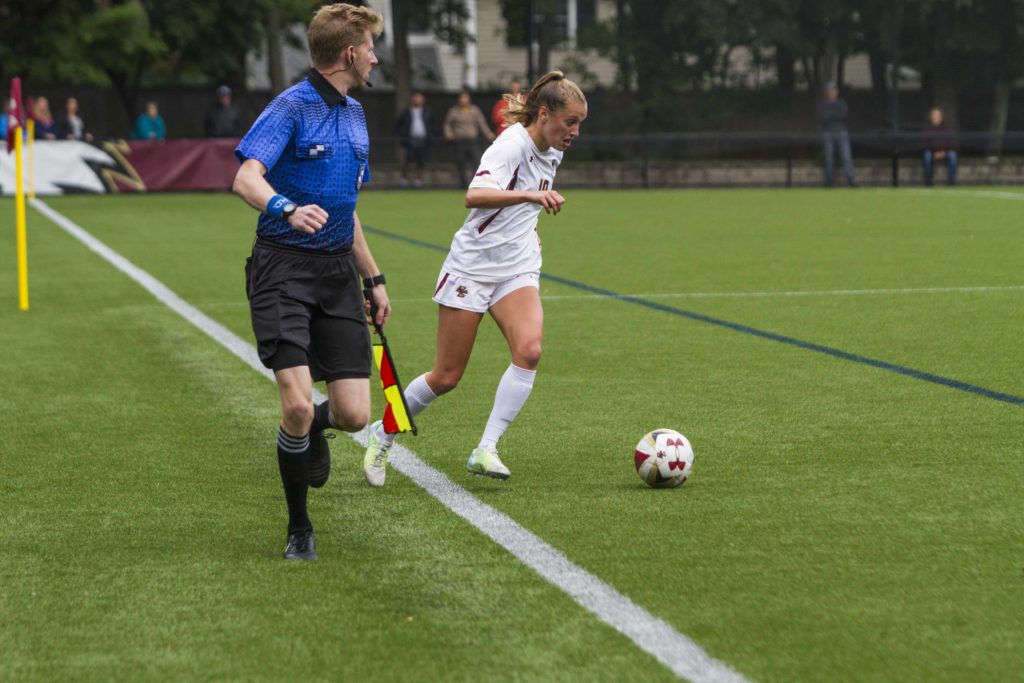 Vaughn’s Brace Against Clemson Vaults Eagles Back into Win Column

Boston College women’s soccer was not fazed by a late-game deficit. In fact, by the final whistle, the Eagles might have looked more dominant than they had all season. After suffering its first loss of the season to Wake Forest earlier in the week, BC proved it belonged in the United States Soccer Coaches Poll on Sunday afternoon, returning to the win column with a 2-1 victory over Clemson.

No. 11 BC (11-1, 3-1 Atlantic Coast) faced a unique challenge heading into the afternoon kickoff against the Tigers (7-5, 2-2)—would one loss at Wake Forest turn into a losing streak for the Eagles? Certainly, Clemson, just one week removed from a double overtime upset of No. 4 Virginia, was bound to provide BC with a rigorous test.

The Eagles, who failed to find the back of the net in the second period of their match against the Demon Deacons, got off to a slow start on Sunday. The first half was scoreless, with possession constantly changing hands. Eagles and Tigers defenders successfully cycled the ball through the midfield and both sides heavily utilized their outside midfielders, in attempt to feed goal scorers, like BC’s Sam Coffey and Clemson’s Mariana Speckmaier. As the first half action came to a close, a relatively uneventful match would soon transform into BC’s most important 45 minutes of the season.

As the second half began, both teams increased their level of play. First touches were crisper, and the tempo of the passing elevated noticeably. Twenty minutes into the second half, however, Clemson began advancing the ball through the midfield with little opposition from the Eagles. Entering the game, a major contributing factor to BC’s dominant 10-1-0 record game was its ability to defend as a unit. The Eagles’ opposition has rarely been able to move the ball with ease from defense to the midfield, as BC strikers such as Olivia Vaughn team up with aggressive defenders like Gianna Mitchell to win back possession through traps and relentless pursuit of the ball.

Yet on Sunday, Clemson capitalized on a defensive gap in the midfield and quickly moved the ball out to the left wing to Renee Guion, who lofted cross into the Eagles’ 6-yard box. Clemson striker Mackenzie Smith muscled her way through two BC defenders to redirect a header just below Eagles goalkeeper Alexis Bryant’s left hand in the 69th minute. Suddenly, BC had only minutes to dodge a two-game losing streak.

Now trailing on the road, it was up to the Eagles to find a response in the face of adversity. And thanks to Vaughn, they found the perfect answer just three minutes later. The junior forward led a counter-attack with a solo run from BC’s own half. After winding her way through multiple Clemson defenders, Vaughn fired a low laser-like shot across Tigers goalkeeper Sandy MacIver from 20 yards out, burying the ball in the far corner to tie the game.

Vaughn’s equalizer sparked a fire in BC that hadn’t been present since its victory over Florida State. Just 10 minutes later, Coffey delivered a dangerous ball into Clemson’s half. Vaughn fought her way through traffic, won the ball ahead of MacIver, and slotted home the go-ahead goal for the Eagles.

While Vaughn’s performance carried BC to a major conference victory, Coffey also continues to impress. She leads the nation in assists, with 11 in 12 games. Head coach Alison Foley is also off to her best all-time start as skipper since her first season in 1997.

As the Eagles return to Chestnut Hill with Virginia Tech on the horizon, only time will tell if BC can maintain its excellent start to the season. For the moment, the loss at Wake Forest looks like nothing more than a minor blemish on what could very well be a historic season.