Last Sunday, Boston College field hockey rolled to a dominant 6-0 victory over New Hampshire. The Eagles (6-3, 2-1 Atlantic Coast) were in command over a relatively weak Wildcats team for virtually the entire game, outshooting their opponent 25-4. Coming off the impressive outing, the ninth-ranked Eagles hit the road to face a tough Fairfield squad (9-1). BC is looking to continue a three-game winning streak, but will have to end Fairfield’s seven-game streak in order to do so.

Who is BC playing?
Fairfield

Where is BC playing?
University Field, Fairfield, Conn.

How to watch:
Live stats for the game will be provided by Sidearm Stats.

1) After a goal and an assist against New Hampshire on Sunday, Frederique Haverhals is now second on the team in points (10), as well as tied with Fusine Govaert for the team lead in shots (25).

2) Sarah Dwyer is sporting a 1.06 goals against average, a mark that’s good for second best in the ACC.

3) Over the span of its three-game win streak, BC has scored 10 goals while allowing just one.

1) Fairfield has two clear scoring threats—Danielle Profita leads the team with seven goals, while Emma Matlach is not far behind her with six.

2) Goaltender Zoe Rosen has allowed six goals in nine games, earning the win in eight of them.

3) The Stags have yet to be beaten at home in four games, so the Eagles will face an uphill task in beating them on their home field.

BC and Fairfield last squared off in 2004 where the then No. 12 ranked Eagles came out on top, 3-0, recording their sixth shutout win of the season at the time.

The Eagles know they are going to have to battle in order to take down a strong Fairfield team. It has been challenging for opponents to score on the Stags this season, so BC needs to find a way to put in a goal or two early. Ultimately, the game will likely be very hard fought, and the Eagles will have to play 70 good minutes of field hockey to earn a win over a team with just one loss. 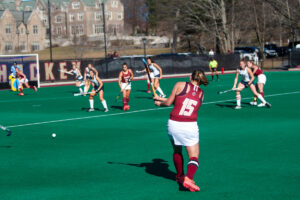