Home » Against Notre Dame, BC Suffers Third One-Goal Loss in a Row 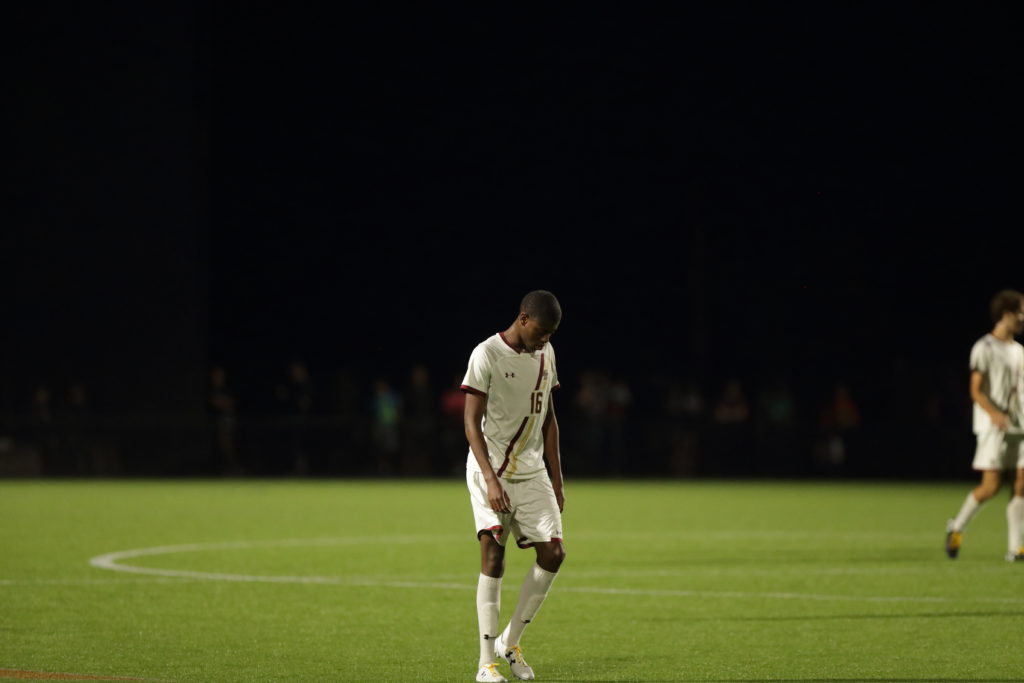 Against Notre Dame, BC Suffers Third One-Goal Loss in a Row

For the third game in a row, Boston College men’s soccer found itself on the wrong side of a one-goal game. After narrowly dropping matchups with No. 7 Louisville and No. 9 Duke, the Eagles traveled to South Bend, Ind., for a game with another top-25 opponent in No. 20 Notre Dame. And, in a match in which the two goalies combined to make just one save, BC fell in a 1-0 heartbreaker.

The Eagles (2-3-2, 1-3 Atlantic Coast) started the season without a single loss through their first four games, splitting between wins and draws. In a predictable manner, though, the difficulty of the ACC schedule has quickly led to that unblemished start come crashing down. Since beating Clemson, 3-2, to open conference play, BC has lost three games in a row by a combined three goals. Friday night’s defeat at the hands of the Irish (5-3-1, 2-1) was another tough reminder that although the Eagles have proven that they’re up to par with the conference elite, they haven’t been able to fully establish their place among the ACC’s best.

Friday night’s loss came down to one moment, which came just four minutes after halftime. After playing to a scoreless standstill through the first 45 minutes, Notre Dame finally broke through. Despite seven Eagles players in the general vicinity of the ball, Irish midfielder Jack Casey was able to play it forward after beating BC’s Abe Bias, leading teammate Aiden McFadden toward goal. Eagles keeper Antonio Chavez-Borelli, who made the only save of the game, came out toward the ball but hesitated, and McFadden’s only touch on the ball was enough. The sophomore slid in with BC’s Heidar Aegisson and David Longo flanking him, and kicked the ball to Chavez-Borelli’s left for the eventual game-winning goal.

Chavez-Borelli stayed on his knees for a second, while Longo and Aegisson threw up their hands in disappointment. It was the lone defensive breakdown of the game for the Eagles, but it proved too much to overcome. The image of McFadden leaping up and sprinting toward his teammates while BC’s players looked to the sky was particularly striking—it was a reminder that even with plenty of optimism surrounding the team and the return of Aegisson from injury, the Eagles remain a rung below the top teams in the conference.

Frustration set in after McFadden’s goal, and the ensuing physical play led to a BC red card with 14 minutes to go. Lasse Lehmann was the guilty party, charged with one of the four cards that were issued during the game, and it basically sealed the loss. The Eagles couldn’t crack the Notre Dame defense with a full team, so playing with 10 made it all the more difficult. The Irish pressed forward and created a few chances down the stretch, but mostly just played slow, possession-based ball, keeping BC far from even a glimpse at an equalizer.

McFadden’s goal has clear parallels with the losses to the Cardinals and Blue Devils. Both of those were decided by the same margin and featured game-winning goals that were the product of through balls. Against Louisville, BC conceded an 80th minute goal, allowing Cherif Dieye to receive a pass from Tate Schmitt and coast in on net. Then, against Duke, the Eagles allowed Issa Rayyan to chip a ball over the defense and Daniele Proch was able to sprint through and get a head on it. The two goals were examples of BC’s defenders failing to contain forwards up to, and the issue once again popped up against Notre Dame.

The silver lining for the Eagles is clear, though. In three difficult conference games against ranked opponents, BC narrowly lost each time—and were competitive into the waning minutes. It took Louisville 80 minutes to finally break them, and while the Irish scored some 30 odd minutes earlier, it was still a back-and-forth game. Aegisson’s return has been a boon for BC, but it remains to be seen whether he and his team have enough firepower to overcome the top of the ACC. The Eagles are competitive and playing close games, but that only gets you so far. Beating Clemson was impressive and seemed to indicate a chance at making serious noise in the conference standings, but this three-game slide reflects how much work is left to do. BC has half of its season ahead of it, and while losing three in a row is never a good thing, playing close with ranked teams should indicate a chance at better results in the easier weeks to come. 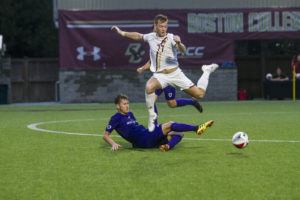