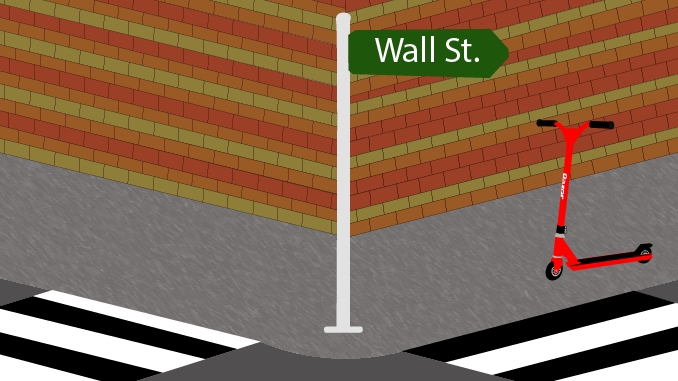 Congratulations, you’ve accomplished your CSOM dreams to work on Wall Street! Now imagine you’re on your way to work one morning. Since you already live in an overpriced loft in Bushwick, you can’t afford to own a car (yet) and rely solely on public transportation to get from point A to point B. Your commute is humbling, but, for the most part, works as advertised, dropping you off on a corner a mile from the office. You’re rarely early for your 8 a.m. start due to the train schedules, so you’re only option is to speedwalk— your muscle fit shirt and tight pants won’t thank you later—or adopt a light jog in order to make it in on time. You’d prefer not to do that so as to avoid spending the rest of the day in a sweat-soaked shirt. What do you do to solve this last-mile issue? If this had been you just a few years ago, your answer would be to bite the bullet and get the work at the expense of your shirt’s dryness. A new revolution is brewing in the startup-studded hillsides of Silicon Valley and China, however, that holds much promise in changing the mobility profiles of cities around the world.

The scooter represented a liberation from the onerous process of learning how to ride a bike. It was light, affordable, and very well-built, sustaining a life of attempted ollie flips and off-road maneuvers. The Razor Scooter coming out of the ’90s gradually became an iconic mobility figure that peaked the interest of techies and entrepreneurs looking to disrupt the sharing economy and create a new “micro-mobility” market, to the same extent that Uber did for ridesharing and a number of startups did for dockless bike-sharing.

With the seed of commercial opportunity planted, companies began to ideate on how to use scooters to solve the last-mile issue for urbanites as well as suburban residents living in “transit deserts”—areas with limited transportation supply. What they came up with was a 21st-century upgrade to the beloved razor scooter. Equipped with bluetooth, GPS tracking, electric motors, and an app-controlled locking mechanism, these scooters can be rented out for as little as a buck, and dropped off at your destination, hassle-free. No need to find your nearest docking station or parking spot. As long as it doesn’t obstruct pedestrian walkways and isn’t left unattended in the middle of traffic, the venture-backed startups that manage these fleets are happy to see a new wave of transportation zipping through the streets.

Speaking of investment, companies like Uber and Lyft have hopped onto the wave of enthusiasm and money flowing around the e-scooter space. Uber entered into a strategic partnership at the end of July to allow their users to locate nearby e-scooters available for rent. Lyft bought Motivate, the largest operator of docked bikeshare systems in the US, in the hopes of benefitting from its market insight in order to integrate alternative mobility options directly into the Lyft rider app.

Many companies utilize mass-produced Xiaomi Mini electric scooters for their fleets, adding front and rear lights as well as anti-theft features in order to be legal for road usage. Each scooter has a battery capable of supporting 18 miles of range, on average, and the responsibility of recharging dead units is crowdsourced. Although it increases the risk of theft, this initiative exists as a net win-win for both consumers as well as e-scooter companies by pulling down operations costs and providing an alternative source of income for residents with time at their disposal.

At the same time, the rush to penetrate big-time markets such as San Francisco, Washington, D.C., and Boston has made the relationship between startups and city government an increasingly important one to nurture. Yet, city government has been notoriously slow to open up its streets to data-driven companies, especially if those companies are at risk of disrupting the safety of road users and mismanage their service. For this reason, e-scooters have begun to pop up in many U.S. cities often times driven by a mantra of “Ask for forgiveness, not permission.”

This past summer, one of the main players was approached by Cambridge city officials requesting that the company remove all of its e-scooters from the city after they appeared unannounced in July without receiving the required “Display of Merchandise” permits. It has been a testy liftoff, but my hope is that cities actively take a role in drafting appropriate legislation governing the activities of the mobility sharing market in order for residents to feel secure in zooming around town at 15 mph on a two-wheeled, electric chick magnet.

Flashback to that early morning to commute to your job on Wall Street. You’re now standing on that same corner a mile from the office, considering that same question, nervously looking at the same time on your wristwatch. You realize you have don’t have enough cash for a cab ride, and the chances you manage to hitch a ride from some extraordinarily kind motorist is negligible. Behind you, the unique smell of Halal Guys and tired souls drifts up from the subway entrance and reminds you of the unpleasant experience you’ve just endured. All of a sudden out of the corner of your eye, you spot an answer to all your prayers.

An e-scooter parked across the street patiently waits for you to hop on and cruise back through a sensation deeply ingrained in your childhood. The promise of that feeling wins you over, as you top up your virtual wallet, identify the e-scooter on the app, wirelessly unlock it, and relieve the kickstand of its responsibilities. You reach your office five minutes later, a smile forming at the corners of your mouth.