Home » Notebook: First Down Play-calling Cause for Concern in BC’s Win Over Temple 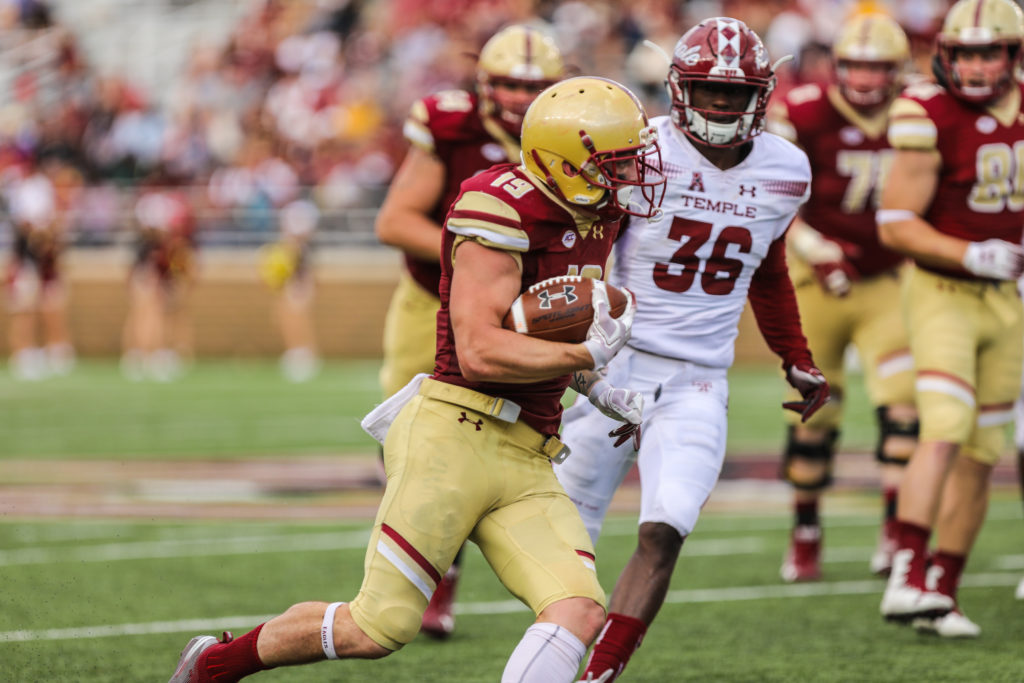 Notebook: First Down Play-calling Cause for Concern in BC’s Win Over Temple

After a crushing loss to Purdue—one in which the Boston College football was severely outplayed, the Eagles returned home needing a victory against a Temple team, just two weeks removed from an upset of Maryland to get its season trending back in the right direction. The game itself showcased many of the Eagles’ flaws, but they were able to shake off defensive and special teams miscues as well as a physical Owls team to record a 45-35 win. Here are some things to watch for the Eagles moving forwards:

BC’s issues defending the run have been well-documented thus far in 2018, and though the Eagles were better against Purdue, holding the Boilermakers to just 76 yards on 41 carries, their weakness was exposed yet again by Temple’s Ryquell Armstead. From his third carry of the game, it was clear that the senior would be a thorn in the Eagles’ side all game long. Armstead took a direct handoff from Anthony Russo and slipped through a running lane created by his offensive line before powering through Lukas Denis’ attempted tackle on his way to a 75-yard touchdown run that looked almost too easy.

For the rest of the game, Armstead tormented BC defenders, both on runs up the middle and tosses outside, adding 96 yards and three more touchdowns, the last of which trimmed the Eagle lead to just 38-35 in the fourth quarter. That play perfectly showcased Armstead’s elusiveness, as he received a pitch from Russo and easily skipped past the outstretched arms of Mike Palmer—who was filling in for an ejected Lukas Denis—before practically walking into the end zone. It’s clear that BC still has issues with its run defense that must be figured out with more elite backs, such as Clemson’s Travis Etienne and Florida State’s Cam Akers, still on the schedule.

2. Getting off the Field

BC also has to be better at getting off the field when given the opportunity. In the Eagles’ third game against Wake Forest, they allowed the Demon Deacons to convert 6-of-7 fourth downs, and last week against Purdue, they allowed the Boilermakers to convert 9-of-19 combined third and fourth downs. This game, Temple was 8-of-16 on third down, utilizing both Armstead, who converted three times in short-yardage situations, and the arm of Russo.

BC likely would have been better off if it had been able to force more third-and-long situations. Temple faced an average of 5.8 yards to go on third down, and converted 5-of-7 attempts when it faced third and four or less. On third downs longer than nine yards, the Owls were just 1-of-3. Going forwards, the BC defense has to find a way to put itself in less difficult third-down situations. One solution would be to play more aggressively in man coverage on early downs. Several times, Russo was able to pick up seven or eight easy yards because the Eagles’ defensive backs were playing 10 or more yards off the line of scrimmage.

BC’s offense has been rightly praised for its explosiveness this season under the guidance of offensive coordinator Scot Loeffler. After all, putting up 40-plus points in four of five games is impressive regardless of the opposition. There’s an element of predictability about the play-calling, however, that is going to cripple this team if it’s not changed.

Against Temple, BC ran 35 first down plays, and ran the ball on 27 of them. In other words, 77 percent of the time on first down, the Eagles ran the ball. It’s fair to note that many of these runs came with BC up double digits in the second half, but it was also the repeated running that led to three-consecutive stalled drives and allowed Temple to cut a 17-point Eagles lead to three in the fourth quarter. The first down run has certainly become a staple of the BC offense under head coach Steve Addazio, and an instinct to establish the run on early downs is certainly understandable. But for an offense to be consistently successful it needs to be unpredictable and innovative, keeping a defense off its heels.

The predictability of the first down play call was something that certainly hurt the Eagles during their lone loss of the season to Purdue, as Boilermakers defenders aggressively played the run on first and second down, frustrating the BC offensive line and Dillon, who was held to just 59 yards on 19 carries and found little to no running room, as the result of stacked Purdue fronts. A run-heavy approach may have worked against Temple, but with the majority of the ACC schedule still to play, the Eagles need to find a way to diversify their play-calling on early downs, or risk having a repeat of the Purdue game.

4. Ben Glines, Player of the Game

Coming into the season, BC knew that it had a star in Dillon at the running back position, but didn’t know who would step up in the event of an injury to the sophomore phenom. Well, after Ben Glines’ performance against the Owls Saturday, it appears the Eagles might finally have a dependable backup to Dillon. After the sophomore exited the game in the third quarter with an undisclosed leg injury, Glines—a wide receiver-running back hybrid—was pressed into duty as a halfback, and admirably handled the load.

The junior, who actually played the position for four years in high school, finished with 23 carries for 120 yards, and punched in a late touchdown from the one-yard line to cap the game’s scoring. His physical downhill running style was effective all game long, and, going forward, he could certainly spell Dillon for a few carries if necessary, as well as provide BC with another pass-catching back. After all, Glines has spent most of his collegiate career at wide receiver.

In what has become a weekly occurrence for this BC team, special teams was a glaringly obvious issue. First, a Michael Walker fumble on a kickoff was run back for a Temple touchdown, a score that gave the Owls a 14-7 lead. Then, after BC responded by driving downfield for what appeared to be a game-tying touchdown, John Tessitore missed his fourth extra point of the season, leaving the Eagles trailing by a point. Later in the game, Grant Carlson dropped another punt snap and had to fall on the rock, giving Temple the ball at the BC 30-yard line.

To be fair, it wasn’t all bad for the special teams units. Walker somewhat made up for his fumble with two excellent punt returns that gave the Eagles the ball inside Owls territory, and when Tessitore was removed from extra point duty following his miss, Danny Longman stepped up admirably. The freshman made all three of his extra points and even nailed BC’s first field goal attempt of the year, converting from 26 yards just before the first half ended.

But with special teams a consistent issue for the Eagles, it feels almost hollow to again praise the few positives week in and week out. At this point, it’s certainly fair to say that the special teams unit is one of the program’s biggest weaknesses, which is unfortunate for BC, considering that it can’t afford to keep giving away free points on a weekly basis in the ACC and continue to win.

And finally, in what was one of the stranger aspects of an all-around crazy game, not one but three players were ejected for targeting. First, Denis—a Walter Camp All-American safety—was tossed early in the second quarter after a violent hit on Isaiah Wright. Next, at the end of Taj-Amir Torres’ interception return, Temple tight end Chris Myarick knocked the cornerback’s helmet off, earning an ejection of his own. And to cap off the afternoon, Jyquis Thomas lowered his head into Michael Walker, knocking the Eagles receiver to the ground, but ending his day in the process. The targeting rule is intended for player safety and a good addition to the game, it’s just odd to see three of those fouls in the same game.