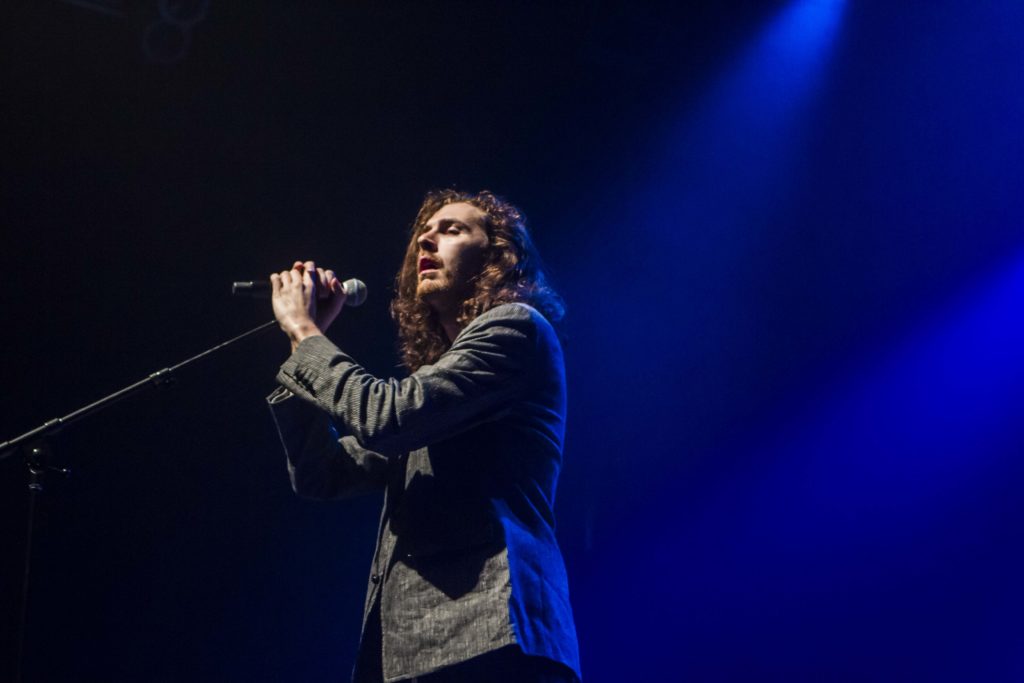 Few can flaunt talent as formidable as that of Hozier. The Irish singer-songwriter backs eloquently written songs with powerful vocals and skillful guitar playing, and to no one’s surprise, a long line of people snaked around the streets surrounding the House of Blues in the nasty New England mist for his sold out Oct. 1 show at the Boston venue.

The night kicked off with a warm set from the Dublin-based folk duo Hudson Taylor. Joined by a band of bohemian musicians and decked in garb laden with fringe and denim, the rockers brought a rustic feel to the heart of the city. Hudson Taylor opened by replacing a line of “Travellin’”—a track from its 2018 EP Feel It Again—with a shout out to Boston, a city that warmed up to the unfamiliar tunes by the end of the night.

Energy built up throughout the first few songs as the audience connected with the band’s campfire jam sesh sound. Hudson Taylor challenged the crowd to learn the chorus to “Don’t Know Why” before performing the harmonica-filled hit, the crowd singing the lyrics back to the brother duo throughout. A spotlight flooded the space around lead singer Alfie Hudson-Taylor while he strummed the opening chords to “Old Soul” on his acoustic guitar to slow things down.

Hudson Taylor introduced the packed venue to more of its original hits before ending on an strong final two songs. Guitarist and vocalist Harry Hudson-Taylor added his own personal flare to the first building ballad “Battles” by rambling his own impromptu battle cries into the mic between guitar strokes.

Nothing gets a crowd of Bostonians riled up like “Shipping Up to Boston,” the Dropkick Murphys anthem that proved the perfect song to conclude Hudson Taylor’s sensational set. Straying from the Murphys’ usual growl, the brother band softened the vocals while feigning an Irish jig to the fast beat. The audience punctuated the chorus with “woah”s and flooded the stage with rapturous applause as the group made its exit.

Fellow Irishman Andrew Hozier-Byrne entered the stage to the sound of deafening screams and the drum beat of the recently released “Nina Cried Power.” The singer flailed around the stage for the first few verses, but absorbed the powerful lyrics and exuded confidence once he had a guitar in his hand—throughout the night it became clear that Hozier is most comfortable while riffing on the instrument he has mastered.

Hozier revisited the well-known tracks of his self-titled debut album, his only album to date, during the night. Starting with fan favorite “Jackie and Wilson” and continuing through “From Eden” and “Angel of Small Death and the Codeine Scene,” unified voices filled the air to sing the songwriter’s 2014 lyrics back to him.

Hozier traded his electric guitar for a metal box guitar before casting an intense energy on the crowd for “To Be Alone.” Piercing the air with his falsetto at the onset, the fierce ballad presented a shift in the tone of the show—for the remainder of the evening the talented musician tamed the audience with an ethereal combination of lyrics laced with somber sanctity and guitar riffs riddled with aggression.

Following along with the heightened intensity, Hozier introduced “NFWMB” as a “love song for the end of the world.” The repeated line “Nothing f—ks with my baby” rolled off the Irishman’s tongue without the curse word’s usual spite, making elegant the expletive.

Despite the serious tone of his music, Hozier courted the crowd with anecdotes about shows he had played in Boston in the past and with lighthearted jokes—after struggling to tune his guitar for Hozier hit “Cherry Wine,” the singer remarked “This song is called ‘Cherry Wine,’” having introduced it before the first go-around.

Toward the end of his set, Hozier picked up the pace once again with ferocious riffs on “Arsonist’s Lullabye” and “Moment’s Silence (Common Tongue)” and an extended bass-heavy instrumental on “Someone New.” He treated the audience to an unreleased track, which he introduced as “one of [his] favorites on the [upcoming] record.” Hozier ditched his guitar for the track as a hollow drum beat motioned in “Movement.”

Fans demonstrated their undying devotion by effortlessly reciting the lyrics to the 2014 smash hit “Take Me to Church,” a song which transformed the House of Blues into a house of worship as the singer chanted “Amen” into the chaotic congregation.

Hozier queued up slow, heart-wrenching tracks in the encore. Most artists shy away from ending on a low note to ensure the audience leaves energized at the very least—Hozier needs no fireworks or flashing lights to leave an audience awestruck. Showcasing his range both vocally and on guitar, Hozier fleshed out “Like Real People Do” and “Work Song” with raw emotion and authenticity. In his final moments on stage, the performer showed deep appreciation for the welcoming crowd: 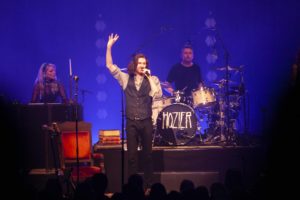