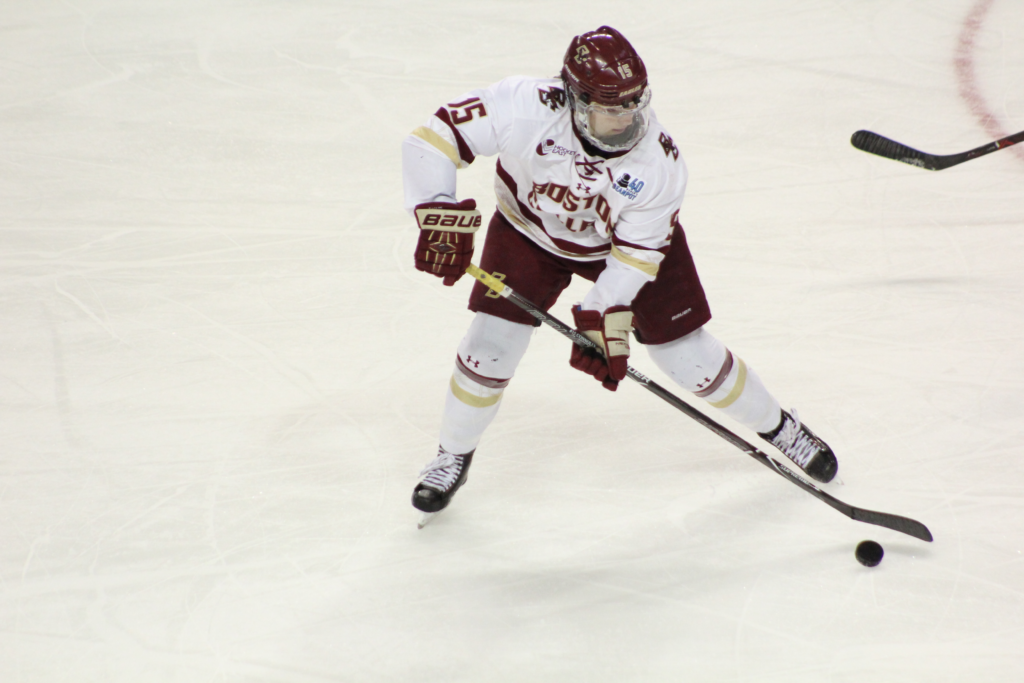 Entering the year with increased expectations, even after posting the program’s third-best record in history a season ago, Boston College women’s hockey stumbled out of the gate. Ranked fourth overall in the preseason USCHO.com poll, the Eagles went to Minnesota for a pair of games against No. 9 Minnesota-Duluth. The weekend didn’t go according to plan as BC was swept, dropping both games. The Eagles look to bounce back in their home opener against Syracuse, who is playing its first game of the 2018-19 season.

Who is BC playing?
Syracuse

Where is BC playing?
Kelley Rink, Chestnut Hill, Mass.

How to Watch:
The game will be available to stream on WatchESPN.

1) Winning the home opener has been a walk in the park for the Eagles under head coach Katie Crowley—they’re a remarkable 9-1-1 in them during her 11 seasons at the helm.

2) BC leaned on a youth movement of sorts over the last weekend, as rookie goaltender Maddy McArthur played both games, while Savannah Norcross scored a goal and Kelly Browne had an assist for the Eagles’ first points.

3) Returning Patty Kazmaier award winner Daryl Watts tacked on a goal and 13 shots in the first two games of the season—a shot per game total nearly two points higher than what she posted last year, en route to an 81-point season. The sophomore paces the offense and is always a dangerous threat.

1) Like BC with the loss of Katie Burt, the Orange are tasked with replacing a historically great goaltender—Abbey Miller set program records with a career 2.02 goals against average and posted 11 shutouts.

2) Syracuse is led by captain Allie Munroe, a senior who’s racked up accolades during her time in New York. A Conference Hockey America Best Defenseman selection and a returning second-team All-American, Munroe has 15 goals and 29 assists in 99 career games.

3) Head coach Paul Flanagan has been with the program since the beginning, with the Orange being a relatively new college program—it started play 11 seasons ago. Flanagan found early success, but Syracuse has limped as of late, recording one winning season in the past four years.

On Nov. 4, 2017, Syracuse took a commanding 3-1 lead five minutes into the second period, but the Eagles fought back with three unanswered goals for a surprising 4-3 win. The Orange, playing on its home ice, knocked BC back on the strength of goals from Stephanie Grossi, Savannah Rennie, and Lindsay Eastwood. It took just 14 seconds after Eastwood’s goal—that made it 3-1—for the Eagles to start the rally. Molly Slowe’s first career goal cut into the deficit, Caitrin Lonergan pulled them in the 14th minute of the period, and Toni Ann Miano scored the game-winning goal just a minute later.

Not only has BC been historically dominant in home openers, it also boasts a decisive edge in the all-time series with Syracuse. The Eagles hold a 5-1-1 record against the Orange, with the last Syracuse win coming back in 2012-13. What’s especially notable in the series between the two is that the games are often high-scoring, with BC taking the last four by scores of 4-3, 4-3, 7-2, and 10-0. You can expect the Eagles offense—which was held to three goals combined in two losses after averaging over four a game last year—to break out in a big way. With the Orange starting an inexperienced goaltender, Watts and Lonergan are poised for big games, while a tougher defense should prevent BC from needing to stage another multi-goal comeback.