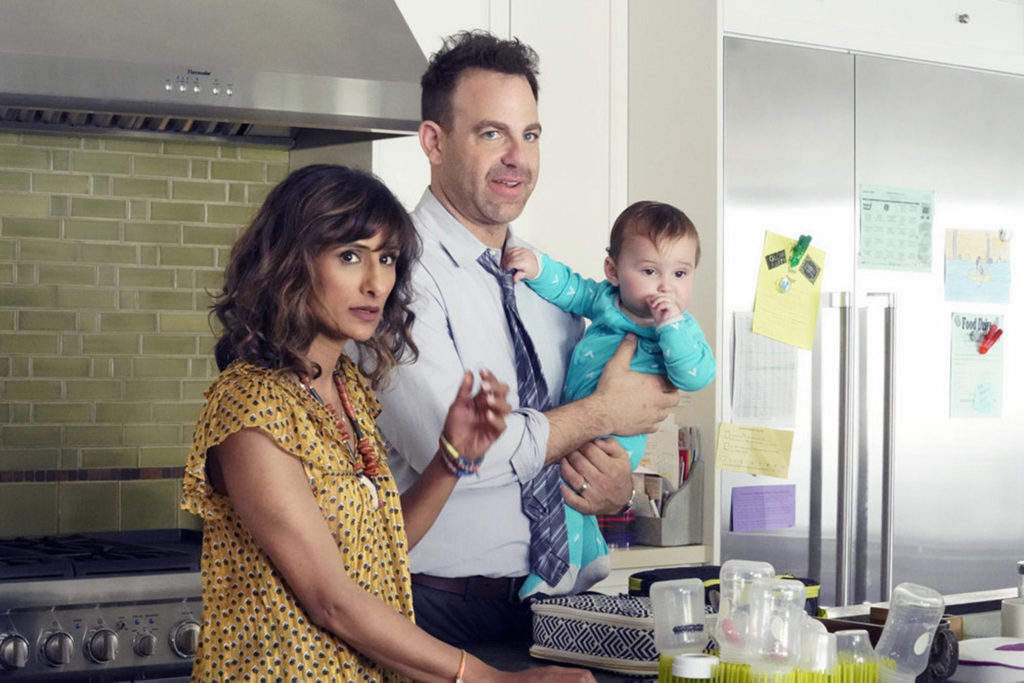 A biracial family, a strong female protagonist, and comedy sounds great! Right? CBS’s new show I Feel Bad has all those components, but just does not work out as well as it should.

I Feel Bad follows Emet (Sarayu Blue), a working mother at the head of her family who is balancing three kids, her husband, her critical parents, and her job. Emet strives for perfection, but often finds herself falling short. Growing up with tense relations with her Indian mother, who was more often critical than supportive, Emet wants to differentiate herself from her mother, although she finds that they are remarkably similar in ways. Emet needs to meet her own expectations, as well as those of her demanding family, and often finds herself overwhelmed and tangled up in everyone’s issues. Emet’s work crew, a group of nerdy video game designers, act as her outlet and advisers, while getting into hijinks of their own.

I Feel Bad offers enough laughs, usually from Emet working herself into ridiculous situations that she then has to figure out even more ridiculous ways to get out of. Many of the sources of conflict, however, either do not have enough stakes involved for the audience to really care, or simply have easy answers to solving them. With comedies depending heavily on crazy conflicts to deliver entertainment, I Feel Bad just does not have enough immersion for the audience to care.

Emet’s character is likeable enough. She has an admirable personality, always striving to be the best for her family. Her comedic moments, on the other hand, end up being overly contrived. A lot of jokes center heavily around her facial expressions, which were funny at first but ended up becoming overused later into the show. Many of the jokes can also come off as inappropriate, simply making the audience uncomfortable. For example, there is a running misunderstanding that Emet’s husband is attracted to Emet’s mother, which was a plot-related joke that was awkward simply did not land.

Emet’s family, obviously a large part of the show, gets a lot of screen time but oddly feel underdeveloped. The audience sees very little of Emet’s kids and never really feels a connection with them, despite many of the conflicts of the plots centering on the children. The kids feel uninteresting and mediocre, especially for the large role they should play. Emet’s husband is utterly forgettable, and one can only remember vague qualities about him with no real personality to grasp onto. Emet’s parents are less forgettable, mostly thanks to her mother’s extremely critical nature. The show, however, fails to really show the endearing love that they intended to show beneath all that critique, and Emet’s mother just comes off as straight-up mean sometimes, especially about very unreasonable things to critique.

Emet’s game designer squad from her work consists of an oddball group of nerds whose storylines breaks from the main story. Sometimes the breaks are refreshing from a stressful situation, but at other times, the side stories are just a distraction. The chemistry between Emet and her work crew is also minimal, mostly as Emet is very strikingly different from them. Although that could have been an intentional statement, as her designers are all white men, more could have been done to foster a sense of community to tie these side characters better into the main story line.

The representation in I Feel Bad is admirable, with an Indian, female main character leading a successful, biracial family. The show is not afraid to make fun of Indian stereotypes, often with self-aware comments about the Indian-ness of Emet’s parents. At one point in the show, when deliberating why they stayed at their daughter’s house rather than a hotel, Emet’s mother jokes: “What are we? White people?” Unfortunately, I Feel Bad has moments that do not click. Jokes do not land, and sometimes the language used seems like it is trying too hard to be relevant. Emet constantly delivers feminist platitudes that disconnect from the show’s continuity. Although such messages are important, the show should have used the “show, not tell” method of storytelling to convey the messages within the show. With every episode having Emet learn a lesson at the end, the show is repetitive and clichéd.

Although a decent family sitcom, the show feels like a less funny version of Modern Family. Side characters are not well developed despite a copious amount of time spent on them. The situations and crises that characters become involved in seem ridiculous and easily solvable. For fans of the family comedy genre, I Feel Bad can be a mediocre substitute when one has exhausted episodes of Modern Family.