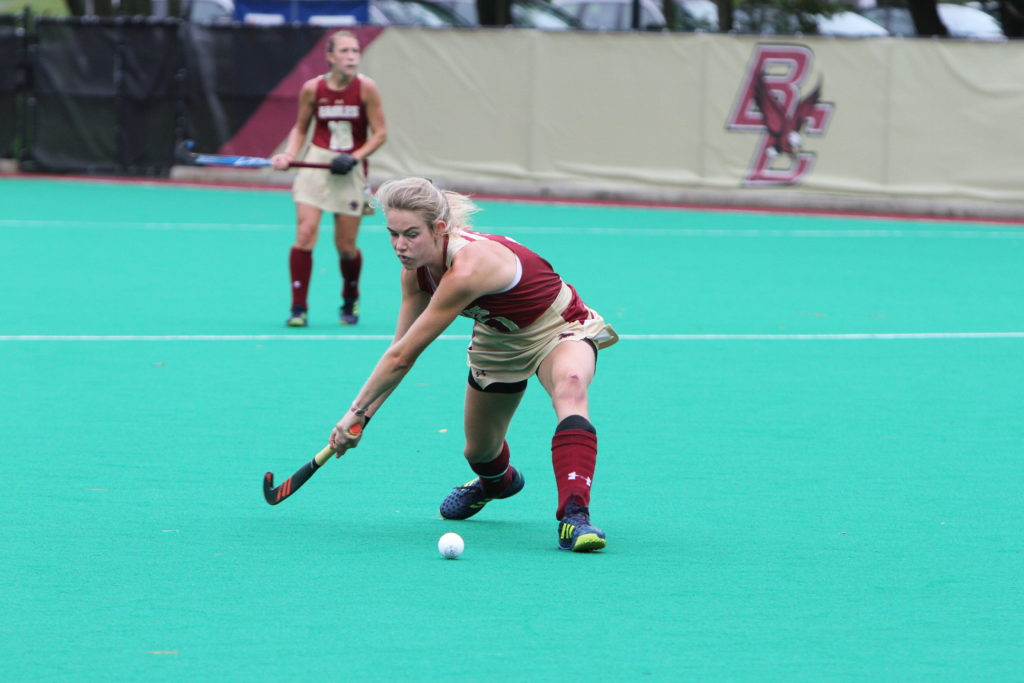 Fourteen minutes into the second half of Saturday afternoon’s game against UC Berkeley, Boston College field hockey was in trouble. Perhaps a little tired after a double overtime loss to Syracuse Friday night, the No. 8 Eagles were staring at a 3-0 deficit, had struggled to convert their shots on goal all day, and were looking at the prospect of a winless weekend.

But as she so often has over her career, Frederique Haverhals stepped up in a big way for the Eagles. The two-time All-American senior captain scored on a penalty corner to get BC’s comeback started, then added two more goals, including the game-winner just over five minutes into overtime, as the Eagles staged a massive rally to beat the Bears, 4-3.

The game started evenly, with chances on both ends. Just 35 seconds in, the Eagles’ (8-4, 2-2 Atlantic Coast) Brigid Wood fired the first shot of the game wide before Lucy Lytle pushed her effort past the post as well. Elizabeth Dennehy had the best shot of any BC player, but her low drive forced UC Berkeley (3-7, 0-1 America East) keeper Danielle Mentink into her first save of the game. On the other end, the Bears earned a penalty corner. Off the penalty, Megan Rodgers, the Bears’ leading scorer, thought she had a clean look at the goal lined up, but her shot was blocked. Just minutes later, Rodgers tried her luck again, but once again the shot flew wide of the post.

After the flurry of early opportunities, the game settled down a bit, with both sides looking to keep the ball and work out a scoring chance. And following a period of possession, it was UC Berkeley that struck first, thanks to Melina Moore. The senior forward beat Sarah Dwyer in the 27th minute, giving the Bears the lead with their first shot on goal.

The score remained that way going into halftime, with Nell Webber’s saved shot being the only notable scoring opportunity on either side for the rest of the half. Coming out of the break, though, UC Berkeley seized all the momentum.

After Mentink saved Haverhals’ penalty corner chance, the Bears moved the ball up the field quickly and worked a shooting window for Megan Rodgers. She watched as her initial chance was saved by Dwyer, but the ball bounced back to her and she was able to take advantage, slotting a second opportunity home to double the Bears’ lead.

Just four minutes later, Rodgers grabbed her second goal of the day, once again in open play. With that scoring play, the sophomore had her third multi-goal game of the season and moved to 10th all-time in the UC Berkeley record books for goals scored.

Now down, 3-0, the Eagles came out of a timeout needing a spark quickly, and began to play with a renewed sense of urgency. First, Haverhals shot wide off another penalty corner, and then both Govaert and Webber saw their efforts saved by Mentink. But after more shots by Haverhals and Govaert didn’t find the cage, the Eagles finally found the back of the net. Wood took a penalty corner and laid the ball off for Haverhals, who buried her shot past Mentink for her sixth goal of the season, giving BC a much-needed boost.

Just a minute later, the deficit was cut to one. Wood delivered a great pass to Carly Kauffman in open space, and the senior midfielder made no mistake, finding the cage with a well-placed drive to trim the Bears lead to 3-2. Both Kauffman and Govaert were issued green cards after the goal.

After the scoring play, the Bears changed goalkeepers, as Natalie Dalton entered the game to try and keep the Eagles at bay. But Haverhals simply refused to give in. Once BC won another penalty corner in the 57th minute, the senior capitalized on the opportunity. In what was basically a carbon copy of her first goal, Haverhals took a layoff from Wood and slammed a shot past Mentink, tying the game and capping a frantic BC comeback.

The Eagles kept pushing for the winner, but weren’t able to capitalize on two more penalty corner opportunities, as a Haverhals shot was blocked and Lucy Lytle drew a save out of Dalton. One more shot from Jaime Natale went wide just before the period ended, and BC headed to overtime for the second time in two days.

When overtime started, the Eagles were immediately on the front foot, winning two corners. Both were for naught, and the Bears almost won the game at the other end, but Jonna Kennedy, who subbed in for Dwyer in the second half, came up with a huge save to deny Rodgers a hat-trick.

In the end, it was Haverhals with the winning hat trick. As BC brought the ball out of its defensive zone, Wood located the senior captain, and she coolly finished past Dalton, capping a remarkable second half for the Eagles and winning a thrilling game.

The comeback showcased a resiliency that head coach Kelly Doton was especially proud of.

“Some teams can fold but after the timeout when we were down, 3-0, the team got their legs and energy back and regained that ‘refuse to lose’ mentality,” Doton told BCEagles.com. “It was amazing to see them fight so hard for each other.”

Certainly, with tough matches versus North Carolina and Duke on the horizon, the Eagles will need every bit of that resiliency as they continue to try and climb the ACC standings.