The pending lawsuit against Boston College has had a jury trial date and pretrial hearing date set. The trial is set for April 22, 2019, while a pretrial hearing to hash out the scope of the case has been set for March 7, 2019, according to a new joint proposal filed by both sides.

It is the first jury trial of a due process suit filed after the Obama administration reinterpreted Title IX doctrine in 2011, according to Brooklyn College professor K.C. Johnson, who chronicles Title IX litigation.

The pretrial hearing will cover the “significant differences” the two parties need to resolve in front of Judge Denise Casper. The amount of witness testimony, expert witness testimony, and exactly what damages the University could be liable for will be set during the hearing.

The plaintiff is attempting to bring in an expert witness on the case, but BC has made it clear it will “fight to exclude” that witness’s opinion on the grounds that the issue can only be resolved based on the testimony of the five members of the disciplinary panel that heard the plaintiff’s case, according to the joint statement issued in August.

The trial is estimated by the parties to require seven to 10 days of proceedings. Briefs will be filed in February 2019.

(When the alleged incident originally occurred, the plaintiff, identified only as “John Doe” in court documents, was reporting on an event for The Heights.)

The lawsuit alleged a breach of contract in regards to how Doe was disciplined when he was accused of sexual assault while on a boat cruise sponsored by the AHANA+ Leadership Council (ALC) in 2012. The University investigation into the incident led to Doe being charged for assault rather than sexual assault and a three semester-long suspension. Shortly after his suspension was issued, the criminal charges pending against him were dropped after exculpatory video evidence was found by the police. Doe’s two appeals of his University suspension fell on deaf ears, leading to his lawsuit against BC.

BC has argued that the alleged breach of contract violation should only be subject to a review of whether former Dean of Students Paul Chebator’s and former Executive Director for Planning and Staff Development Carole Hughes’s interactions with the hearing board that handled Doe’s case were improper.

The scope of the case will primarily surround whether the lawsuit will center around only the breach of contract violation or go beyond that issue. Specifically, basic fairness claims the plaintiff has made will be up for debate. The University argued in the August joint statement that no basic fairness claims should be up for review.

BC has argued that the breach of contract violation should only have to do with a review of whether former Dean of Students Paul Chebator’s and former Executive Director for Planning and Staff Development Carole Hughes’s interactions with the hearing board that handled Doe’s case were improper.

Chebator has retired from the University, while Hughes has become the associate dean for Student Affairs and director of Graduate Student Life.

The plaintiff has also asked for $3 million in reparations. The plaintiff’s counsel has cited expenses incurred during John Doe’s suspension, lost earnings as a result of Doe’s delayed graduation, diminished earning potential, and the reputational and emotional cost of the suspension as the reasoning behind the request for $3 million, according to the joint statement filed in August.

The University has argued in the past that damages cannot be rewarded for emotional distress or reputational harm, limiting the scope to reparations related to the delay in graduation and effect on Doe’s employment opportunities and earnings. 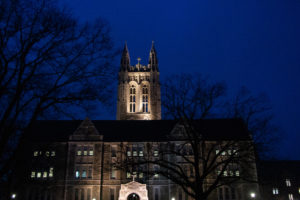 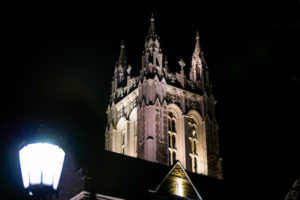