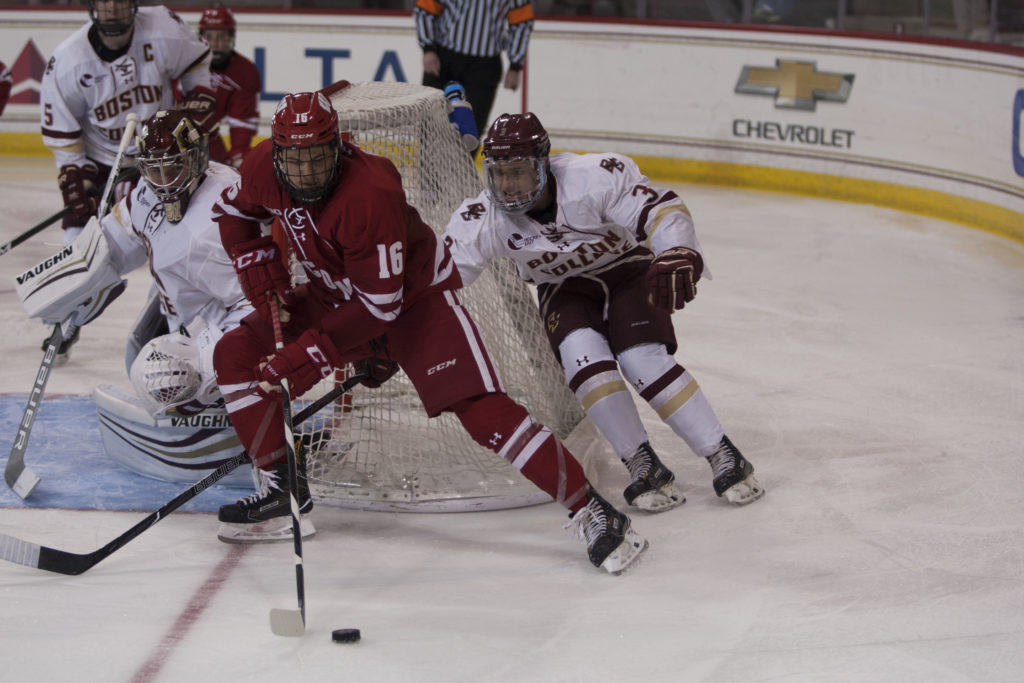 To open the regular season, Boston College men’s hockey will square off against Wisconsin on the road Saturday night for a two-game series. After starting off the year with an 8-1 exhibition win against New Brunswick, BC is looking to officially kick off the 2018-19 campaign on the right foot. The Eagles are currently ranked 12th in the USCHO poll and have been projected to win Hockey East in the conference’s preseason poll. Last year, Wisconsin finished sixth in the Big Ten and, at the moment, is in the receiving votes section of the USCHO poll.

Friday’s game will be available to watch on Fox Sports Wisconsin Plus. Saturday’s matchup, on the other hand, can be streamed on BTN2GO.

1) Against New Brunswick, Oliver Wahlstrom and Christopher Brown each recorded a pair of goals. Five Eagles had multi-point outings as well.

3) Joseph Woll, Ryan Edquist, and Ian Milosz all spent a period in net. Edquist and Milosz led with 10 saves and Woll was close behind with eight.

1) In the Badgers’ exhibition against University of Victoria, freshman forward Roman Ahcan and sophomore winger Sean Dhooghe led the team in scoring with three points apiece. Dhooghe had three assists, and Ahcan had a goal and two assists.

2) Six Wisconsin freshmen scored against Victoria, accounting for 40 percent of Wisconsin’s total points. As a team, the Badgers outshot Victoria, 72-15, holding the Thunder to single-digit shots in each of the three periods.

3) Freshman goalkeeper Daniel Lebedeff led the Badgers with six saves against Victoria. Not too far behind was Jack Berry, who logged five saves.

The Eagles have won seven of the last nine matchups against the Badgers. But last season, Wisconsin defeated BC, 5-2, at Kelley Rink. Then-freshman Tarek Baker ran the show, recording both an assist and a goal. The Badgers are 11-15 all-time against the Eagles.

Its offense executes to its maximum potential. The Eagles were on fire against New Brunswick last Saturday and need to bring similar energy into their matchup with the Badgers. Defensively, Woll will have to be quick on his feet when protecting the net. At the same time, BC must remain alert on defense in order to limit the Badgers’ shot total. The Eagles scored twice in the opening 94 seconds of their exhibition. Replicating that kind of start will set the stage for a successful weekend.

It can’t make it past Wisconsin’s stellar defense. With five of the Badgers’ defensemen projected be NHL draft picks, the Eagles could run into trouble on the ice when trying to reach the net. BC can’t afford to make mental errors and lose control of the puck. The Wisconsin defense is a strong unit and will capitalize on those mistakes. Hutsko—the Eagles’ leading scorer in 2017-18—in particular, will have to step up and galvanize the offense.