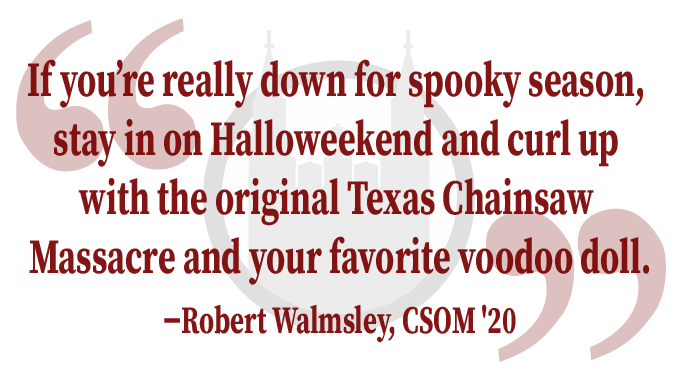 It’s an annual tradition in the Walmsley household to watch the John Carpenter classic Halloween at some point during the ghoulish month of October. Whether it’s on AMC during a marathon or we crack open the dusty DVD case in our basement, we inevitably watch a robotic psychopath in a mutilated Captain Kirk mask chase around a young Jamie Lee Curtis as she serves up blood-curdling screams across suburbia like no one before her. It always ends with a well-placed coat hanger, and I always end up looking over my shoulder freaked out of my mind for at least a couple days.

People love to be scared, and this movie delivers on the promise of the genre like no other. We need to have our fight-or-flight responses triggered every now and then to inject some adrenaline into our mundane lives, and horror movies, like roller coasters, do it without mortality ever entering the frame. That’s why there’s a bombardment of undead nuns and demonic dolls filling up the box office every month, not just in October. It’s rare, however, for these movies to actually raise the hairs on the back of your neck. Even the most nascent horror fans know the tropes and clichés of the oversaturated genre. This brings rise to an even scarier scenario than Michael Myers hiding in your backseat: recommending a scary movie.

There’s no social contract quite like choosing a movie on Netflix. You agree, for the next two hours, to watch something that could potentially be bad, boring, or both, and the severability clause is more easily prompted than ghosts in an excavated cemetery. God forbid you’re the one in charge of choosing the movie, especially a horror film. As I mentioned above, people love being scared, but actually being afraid is a rare case. Some like the grotesque, others the paranormal, but the one certainty is that if it isn’t scary, the chooser is more to blame than the director.

I recently was involved in this unfortunate situation, and, let me tell you, John Carpenter couldn’t craft a more frightening scene: There were a dozen of us—which is a bad start in itself because fear is best formed in isolated darkness—and naturally everyone was indecisive. No one wanted the Atlas-ian weight propped upon their shoulders. I took the lead, as the resident movie buff (disclaimer: I’ve never seen Citizen Kane) and suggested It Follows, a film that holds up well against the high standards of the Walmsley family. It’s an arthouse indie film with spades of existential dread and a retro score, and it’s also scary as hell. I, at least, thought so.

The movie started slow and built, leaving me with bated breath. The suspenseful reveal came and went. Crickets. Now the horror really started: Instead of blankets raised in front of eyes, the dull light of phone screens had emerged out of the shadows. Side conversations spawned. Plot holes were dug up from the grave—it was a nightmare. I kept wanting to interject, justifying the existence of a film I had absolutely no part in creating, but it was no use. The nail was already in the tomb. It was all solidified at the end: “What the hell was that?” “Uhh, that was dumb,” and “It was kind of funny, in parts” echoed around the room. The horror!

I had succumbed to the tragic misstep of anecdotal analysis. I chose the film based on my taste and my family’s, which is a small sample size with confounding variables. So, what did I get out of all this? I guess, in a way, I am the blood-smeared writing on the wall. I don’t want you to make the same mistake I did this Halloween. And how will you avoid such a disastrous circumstance and be the belle of the monster mash? No, don’t turn to any film aggregator like Rotten Tomatoes or Metacritic that compile reviews of stuffy critics. Instead … ditch the mash!

Film is purely subjective, as is all art, and its quality cannot be measured objectively. So, to mitigate the risk of uncertainty within film preference, go back to the roots of fear itself. For maximum fright, either watch it alone or with a couple like-minded individuals. Hit the lights. Draw the blinds. Toss some Ouija boards on the ground and grab that creepy old Raggedy Ann doll your mom hung onto and embrace the scare. Follow the long-parodied trope of splitting up from the group because every horror director knows we are most vulnerable alone or in a small contingent.

No, this probably isn’t the most enjoyable experience, but who said Halloween or even October was supposed to be fun? This is a month for the sadists and the Wiccans, not themed group costumes and movie watchathons. If you’re really down for spooky season, stay in on Halloweekend and curl up with the original Texas Chainsaw Massacre and your favorite voodoo doll.