Home » Self-Importance, the Defining Characteristic of Our Generation 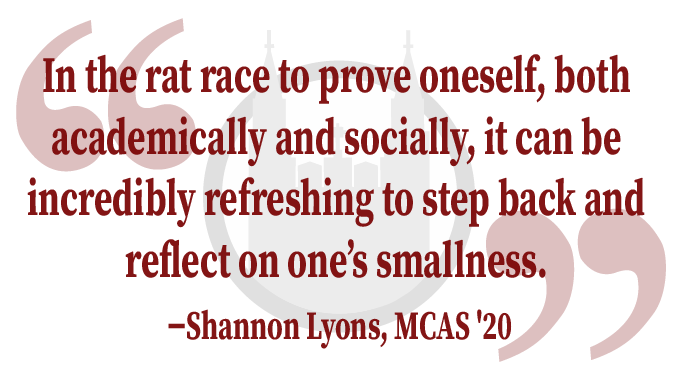 Self-Importance, the Defining Characteristic of Our Generation

The ability to focus primarily on yourself is one of the rare virtues of the college experience. Students have long been advised, by extended family members and self-help magazines alike, that “your college years are your time to be selfish”—to explore your interests, to “find yourself.” Certainly, this is all true to some extent, but at what point does self-focus cross the threshold into self-absorption and pure narcissism?

The claim that millenials are the “iGeneration” is a headache-inducing cliché at which most young people immediately roll their eyes. As students, we’re tired of adults insisting that our greatest concern is how many likes we receive on Instagram or how many brands we can flaunt in one day. These hyperbolic statements reduce an entire population of people to a stereotype that most college students neither fit nor identify with.

There is a subtle distinction between mere vanity and self-importance, and in my opinion, it is the latter that we struggle with most as college students. It’s not that we think we are an incredibly bright and remarkably talented demographic—it’s simply that we think too much about ourselves and the gravity of our individual collegiate experiences.

Perhaps it is the finite nature of college that lends the collective student body this myopic, inward-facing lens—our time at school is limited to four years, so we often find ourselves inflating the importance of every semester, complaining that we don’t have enough hours in the day, greedily grasping at moments as though they were precious items on sale.

At Boston College, our containment within the bubble of campus likely amplifies this attitude of self-concern—as human beings, our thoughts tend to follow our gaze, so, if we cannot see beyond Bapst and Alumni Stadium, then that is where the majority of our mental energy will settle. It is all too easy, at 18 to 22 years old, to forget that there is an entire world beyond campus, nevermind beyond the gates of our individual minds.

If we don’t open these gates, however, we put ourselves at great risk.

I am not arguing that we need to be more politically or socially aware, rather, that we must stop behaving as though our personal affairs are the most significant, consequential events in all of history. In reality, nobody cares about the three exams you have to study for next week, your relationship problems are not all that interesting, and everyone and their brother is looking for an internship for next summer.

This isn’t to say that we should not listen to one another. In fact, I think we would benefit from listening to each other more and giving our own voices a rest. There is something strangely empowering about the idea that, as individuals, we aren’t all that important. In the rat race to prove oneself, both academically and socially, it can be incredibly refreshing to step back and reflect on one’s smallness.

By recognizing that our personal obligations are no more important than those of our neighbor, we lift an enormous weight off our own shoulders. Suddenly, it becomes clear that the audience we’re so desperately trying to impress was never paying attention to us in the first place. On BC’s campus alone, there are over 9,000 individual “performances” being played—9,000 stories being lived out, 9,000 students trying to navigate their unique path, and the truth is, most people are just focused on the ground under their own feet.

As a Jesuit institution, BC strives to teach its students the value of service, social justice, and compassion. Given the popularity of service organizations on campus, I think that our school has succeeded in cultivating a common desire to give back. In examining my original question, however, one cannot help but wonder if this altruistic spirit is entangled with the mere hunger for self-satisfaction. Are we truly striving to make a difference, or are we merely aiming to add one more bullet point to our resumes?

The answer, in my opinion, lies somewhere in between, and that’s okay. As human beings, we have a natural impulse to look out for ourselves and to better our own self-image. To suppress this innate quality would be to deny our own personhood. I think that our goal as students should not be to stop thinking about ourselves altogether, but rather, to develop a sense of peripheral vision—to become aware of the 8,999 students walking beside us.

In a Psychology Today article published in 2017, author Tim Elmore writes, “Among the many reasons for the rise in narcissism today is the notion that a student feels like a mere number; that they aren’t special after all.”

To be special does not mean you must be significant, however. You will probably never be the most “important” person in the room, but to be standing in the room, wherever that may be—or on the stage or in the classroom or out on the soccer field—proves that you are a part of something larger than yourself. Your personal to-do list may have no significance in the grand scheme of things, but your infinitesimal role in the student body grants you a sense of meaning, and it is meaning that makes for a good life.