Finally considered an adult, and ready to work in the real world, college graduates begin an age of excitement and exploration. But in 1969, it was an age of fear. As soon as one graduated college, his draft number could be called, and he would be shipped off thousands of miles away, to Vietnam.

Many young men fled north to Canada, while others labeled themselves conscientious objectors and refused to fight. With a low draft number, Rev. Jeffrey Von Arx, S.J. the 2018-2019 Thomas I. Gasson Professor, S.J., decided that, instead of fleeing, it was the perfect time to dedicate his life to Jesus.

“When I started college, I was kind of interested in the possibility of working in international relations or foreign service,” Von Arx said. “But then I became more interested in history as a discipline, and I also began to think about becoming a priest and joining a religious order.”

One year after he finished his degree in history at Princeton University in 1969, many colleges closed their doors because the students, out protesting, stopped coming.

With protests growing around the country and anti-war sentiment becoming stronger by the day, Von Arx decided that he simply did not want to be involved in the war. He had been considering entering the Society of Jesus, and the circumstances just pushed him to enter the order a year earlier.

Von Arx did his two years of Novitiate—which is comparable to undergraduate school for Jesuits—in Syracuse, N.Y., where he learned a simple but crucial lesson that he carried with him his entire life.

After completing his time at the seminary, Von Arx had the choice to teach at a Jesuit high school or to attend graduate school for history.

“[History] is understanding the collective pasts of the human race, of a particular nation or culture, so that you can understand yourself and the culture or country you were brought up in and make responsible choices about how to move into the future,” Von Arx said.

His desire to teach was still strong, but Von Arx decided that he first wanted to complete a Ph.D. in history, to learn more about different cultures before standing at the front of the classroom to teach students about them.

Even prior to his decision to join the Society of Jesus, Von Arx chose to study history at Princeton, not because it was the most lucrative path, but because he was certain there were age-old lessons still to be learned today.

“I really value working with a number of my advisers at Yale because they taught me what it was to be a good historian, you know, to do really thorough research, to read everything you could about the topic, and to sit down and think about what you think about the materials you’ve read, the evidence that you’ve read,” Von Arx said.

When working toward his Ph.D. at Yale, he focused on 19th-century England and Ireland in addition to church history. These topics, may not seem applicable to today’s world, but Von Arx focused on what lessons could be learned from the people he studied, and he figured out how to apply those lessons to his own life.

For one year after the completion of his doctoral work, Von Arx worked at the St.Francis Xavier parish in New York City until he received an offer from Georgetown University to teach. He would go on to spend 16 years there and eventually earned tenure.

During his time at Georgetown, Von Arx made a lasting impression. He helped to found the Australian Studies Center at Georgetown, the only one of its kind in the United States.

“I got both of the governments interested in supporting it, so it’s still a going proposition,” Von Arx said. “Georgetown is really the only Australian studies center in the United States where you can minor, effectively, in Australian history.”

In 1998, Von Arx learned that Fordham University was looking for a new dean of its college of arts and sciences. Based on his time as an administrator at Georgetown, he decided that he could be a good fit in the new role.

When asked about what made him a good candidate for the position, Von Arx laughed. “I sometimes joke that I didn’t do a bad enough job, and so I got identified in other people’s minds that maybe I was someone who could do college administrations,” he explained, but it was clear he was confident in his ability to have a positive impact on the lives of students.

Twenty years after his term at Fordham began, Von Arx reflected on his time there happily, describing it as one of his favorite roles.

“I really enjoyed the dean’s job because you still have a fair amount to do with students and helping them out, in one way or another,” Von Arx said.

As a teacher, he interacted with students every day. His new position allowed him to continue working with students, but also gave him new opportunities, such as working more closely with faculty and setting the direction of the university as a whole.

“It’s ironic, in a sense, that as a college dean, you deal with the best students and the students that are really having trouble,” Von Arx said.

Along with new responsibilities came the chance for Von Arx to elevate the college of arts in sciences to new heights.

“At the Bronx campus, I thought that neither the fine arts or the sciences were as strong as they could and should be and so I worked hard in trying to get new resources and new facilities for both the fine arts and also for the sciences,” he explained.

Von Arx’s passion and love for his role at Fordham did not go unnoticed. In 2004, he was named president of Fairfield University, a position he held until December of 2017. After spending almost 20 years in administrative roles, Von Arx decided it was time to slow down and go back to where he started.

He returned to the classroom in 2017 when he was invited to teach at Boston College. He teaches a course in modern church history in the School of Theology and Ministry. In 2018, he was named the new Gasson Professor, a position that allows him to continue teaching and to focus again on scholarly work, a part of his life he had missed since his time at Georgetown.

In addition to the time he spends in the classroom and working on new areas of study, Von Arx has resumed writing and also works with a local parish doing outreach to Catholic faculty at local universities like Harvard. Because Harvard is secular, its faculty have limited opportunities to engage with Catholic contemporaries. Von Arx partnered with St. Paul’s parish to host intellectual and social events for the Harvard faculty. He does so out of the belief that one can appreciate another tradition without being a member.

In his book review of Pontius Pilate by Aldo Schiavone, which argues that Pontius Pilate, the judge who condemned Jesus to death in the New Testament, was an agent of Christian salvation, Von Arx echoes this point.

“While Pilate might not have believed in Jesus’ mission, he came to accept that he had one, which he understood could be accomplished only through Jesus’ sacrificial death,” he wrote.

As his 50th anniversary of joining the Jesuits approaches, Von Arx’s story been guided by a similar theme throughout his journey.

At Princeton, not entirely certain he wanted to begin 12 years of schooling, he joined the Jesuits because he was confident in their mission. When confronted with the decision to study history as a discipline or for a salary, he opted for the former, aligning himself wholeheartedly with the Jesuit mission of education. And now at BC, Von Arx is reaching out to academics in Boston who might not agree with his mission, but are at least interested in learning about it.

“The question is how are you most effectively going to engage with the political structures and political like, and I think again, dialogue, engagement, participation, and sometimes confrontation,” Von Arx said. 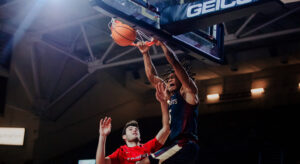