Home » A Pocketbook Recap of HUBweek 2018 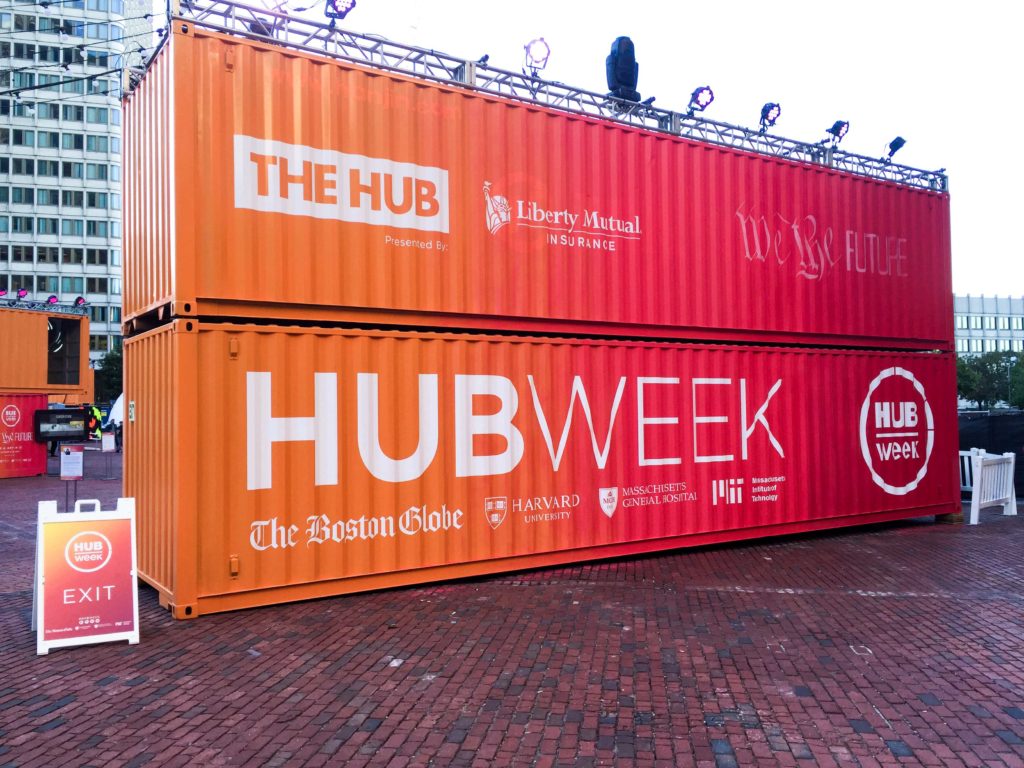 A Pocketbook Recap of HUBweek 2018

It’s the most wonderful time of the year again, but not because of the promise of presents sitting beneath the Christmas tree in a few short months. HUBweek, an annual science, art, and technology festival, has descended upon Boston City Hall Plaza once again with its characteristic shipping containers scattered just outside of the City Hall T station.

This year’s driving theme was “We The Future,” a call to action for innovators, artists, and the public at large to envision a future that works for all of humanity. Topics ranged from immigration and urbanization to health care and labor. The exhibitor pods featured interactive elements, both in the form of crafts exercises as well as virtual reality experiences. Local artists and musicians took up residence outside beautifully painted containers, using the space as an opportunity to engage with visitors and start conversations about social justice and grassroots activism, with low-fi hip-hop providing rhythmic support. Curated speaker spaces and igloo domes surrounded the core exhibitor area. Below is a brief review of all these spaces, which housed the main hospitality and entertainment components of HUBweek 2018.

Hall of the Future

This glass-paneled space serves as a demo area for featured smart home and “Internet of Things” startups such as iRobot, inventor of the famed Roomba cleaning robot. An urban planning firm offered virtual reality tours of the HUBweek complex, while speakers discussed a recent MIT hackathon on a small stage.

Situated adjacent to a private party lounge, this was the main speaker stage for HUBweek. Inside, colorful LEDs illuminated the concave ceiling above a large stage. The seating area was ample in anticipation of a big turnout for the keynote speakers who would ultimately present here. A gentle buzz of conversations could be heard emanating from the room on the other side of the door connecting Center Stage to the Insider Lounge.

The Insider Lounge was the central meeting point for attendees to network, mingle, and enjoy light fare and a drink (or two) from the open bar. Audio from the Center Stage event next door played through the speakers as people conversed about startups, innovation, and the New England Patriots’ recent performance.

Water. Something so basic, so essential in life, something we take for granted every single time we use it. Yet, the lack of clean water across the globe is a crisis that many talk about but rarely take the necessary steps to solve it. One out of every 10 people worldwide, or 663 million people, live without access to clean drinking water. Dirty water is responsible for more deaths globally than all forms of violence, including war. The lack of clean water affects all aspects of society, from education and health to social injustice and politics. It’s an issue that forces girls to stop going to school once they get their periods because one-third of all the schools in the world lack access to clean water and sanitation. But this is a crisis that is 100 percent fixable, and one organization took a vastly different approach to solving it.

This past Saturday at HUBweek, Scott Harrison, founder and CEO of Charity: Water, spoke about creating his non-profit to focus on completely eliminating the water crisis in the world. He said he found meaning in life when he volunteered as a photojournalist in Liberia and realized that the source of many social, educational, economic, and health problems came from the lack of clean water. He watched as kids would fill up jerry cans with brown water full of worms, leeches, and pathogens. Harrison made it his mission to help make sure no one in the world would ever live without access to clean water, effectively beginning his charity:water story.

Harrison’s words were full of inspiration and hope. Without any experience in business or finance, Harrison focused on the people affected by a lack of drinking water rather than just the issue itself. He placed an emphasis on storytelling and journalism, referring back to people like Jean Bosco, a 15-year-old who he had met 12 years ago drinking from a muddy pond near his village. That same boy now has a wife and a son who can drink clean water every day from the well installed by charity:water in their village.

Harrison talked about a women named Helen Apio, who recognized her own true beautyf after finally receiving access to unlimited clean water next to her house as a result of wells dug by charity: water. He told the story of a little girl named Rachel Beckwith, who pledged her ninth birthday to Charity: Water. These stories add a certain human element to the work that charity: water does and has inspired the Boston College charity: water club to continue working. Ultimately, Harrison holds that the problem of dirty water is a solvable one. All it takes is a mixture of transparency and intentionality.