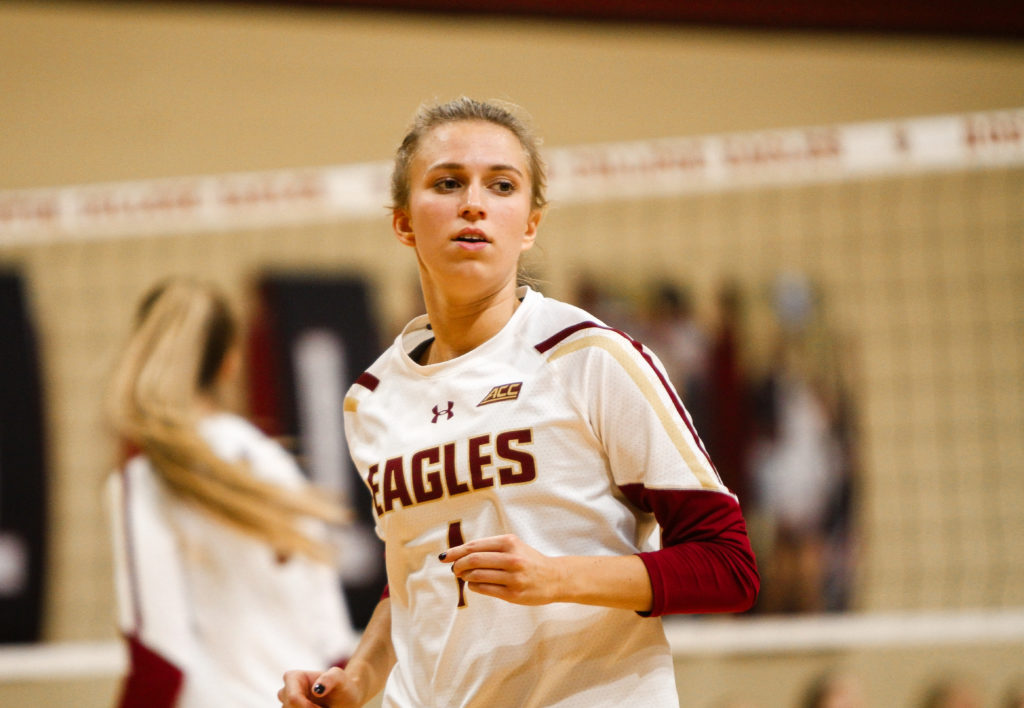 Boston College volleyball (12-8, 2-6 Atlantic Coast) will look to snap its six-game losing streak when it faces North Carolina State (9-9, 3-5) and North Carolina (5-12, 1-7) on Friday night and Sunday afternoon, respectively. While BC boasts a better overall record than both squads, the team has struggled greatly against ACC opponents. Two wins this weekend would result in the Eagles slowly striving toward a .500 mark in conference play, as well as a boost in confidence. Of the two, UNC has a more similar and equally poor conference record. Quite simply, a loss to the Tar Heels would be a significant setback.

1) BC has lost six games in a row, all of which have been against ACC competition. Half of these six games have been decided in just three sets.

2)  With 939 total kills, BC is just 61 short of 1,000, a goal that could very well be attained during the span of these two weekend matchups. Cat Balido leads the team with 192 total kills.

3) Mackenzie Morrison has been dominant on defense, leading the team with 302 digs. The Eagles will be in need of the libero’s strong presence this weekend in order to ensure the score is not run up and a fifth set can be forced if need be.

1) In matchups where N.C. State has suited up against teams that BC has also previously played—Virginia, Miami, and Florida State—the Wolfpack has ended up on the wrong side of the scorecard, except against UVA. The Eagles lost to the Cavaliers in a close five-set match, 2-3, while N.C. State rolled to a four-set victory over UVA.

2) The Wolfpack is outblocking its opponents, 41-30. Lauryn Terry leads the team with 63 total blocks.

3) N.C. State freshman Pam Chukwujekwu will be facing her sister, BC’s own Amaka Chukwujekwu. The duo won the Chesapeake Region Volleyball Association Regional Championship back in 2016.

1) Redshirt sophomore Hunter Atherton is seventh in assists per set in the conference with a total of nine.

3) The Tar Heels are undefeated against BC with a record of 22-0. Eleven of those wins have come on the road.

In 2017, BC dropped a three-set match to the Wolfpack on the road. The Eagles started strong, but eventually dwindled. That said, BC was able to make a late-match push in the final frame, but the Wolfpack ultimately secured the last two points to ensure a victory.

BC fell in three quick sets in last year’s meeting with the Tar Heels. In the first set, UNC’s biggest lead was only four points, but it pulled out the victory and would go on to claim the other frames in a much easier fashion. The Eagles recorded more assists than their ACC counterpart, in large part due to Jane DeJarld’s 28. Yet Taylor Borup’s 11 kills and Mia Fradenburg’s 16 digs spelled doom for BC.

On paper, both matchups are winnable for the Eagles. Whether BC reenters the win column will likely depend on how it kicks off the match. A slow start could very well spoil either contest. One highlight of the weekend will definitely be the matchup between the Chukwujekwu sisters.Pam is a freshman, so this will be the first time the sisters face off against each other in college. There will certainly be some competitive vibes in the air in the familial matchup between two sisters, who no doubt used each other as practice dummies in years prior.