Less Capitalism, More Catholicism: Andrew Vaccaro and the Young Democratic Socialists of BC

Boston College students have been making fun of Jesuit High School bros since before Saturday Night Live made it cool. Every day walking around campus in their lacrosse and football hoodies in purple, maroon, gray, and gold are retired Jesuit high school athletes, and their letters read Gonzaga, BC High, Straker, Loyola, Fordham Prep, Fairfield Prep, Regis, Dallas Jesuit, Xavier and, perhaps most striking since the recent controversy surrounding the Supreme Court nomination of Justice Brett Kavanaugh, Georgetown Prep.

It is the first inclination of many to dismiss these Men for Others as privileged and immature, and fill their mouths with caricatured catch phrases like, “My dad’s a lawyer,” and “The market will regulate itself.”

But there is one student—a graduate of McQuaid Jesuit High School in Rochester, N.Y., and political science and perspectives double major, with rich, dark Italian hair slicked back and round Atticus Finch-style glasses trimmed with tortoise—who is especially skeptical about the market regulating itself.

The DSA first received mainstream media attention when Bernie Sanders ran in the 2016 Democratic primaries. The organization’s members favored the more grass-roots Sanders over Hillary Clinton, whom they feared was compromised by her ties to the political establishment. When Clinton won the nomination, some progressives were particularly upset with the Democratic establishment and began to look to other parties and leaders, while others, like Vaccaro, fell in line behind Clinton.

“I thought Bernie was really cool. But when he lost, I didn’t take it that hard, Hillary was great as well,” Vaccaro said. “And then … when the election happened, it kind of broke my brain in ways that I didn’t expect. The fact that something like this could happen is indicative of something that is far more wrong than I ever actually appreciated.”

Once Clinton lost in November 2016, the DSA decided at its annual conference that it would focus its scarce resources on local midterm elections in which candidates were running as open Socialists. Young progressives were not just concerned that Donald Trump won, but that the electoral process had become monetized and manipulated by the wealthiest of Americans to a point of no return. It was time to start over, with local candidates on the radars of neither mega-donors like George Soros or the Koch Brothers.

Around the same time, Vaccaro began asking his own questions about America’s political system, and turned to the colosseum of international political conflict, Twitter.

“[The DSA] have a pretty active online presence. And then over the next couple months, I was reading a lot, I was looking into it more and more finding that they were making a lot of sense,” Vaccaro said. “The answers that the Democrats were putting out were insufficient, the Democratic Socialists had answers that were thought out and coherent.”

Vaccaro, who hopes to one day become a lawyer, is part of a movement of young people who feel failed by the system in 2016, and are curious about finding a new system instead of patching the existing one. Members of this movement don’t believe politicians when they say there’s no money in the budget to fund Medicare for All, and point to the U.S. defense budget, which is larger than those of China, Russia, Saudi Arabia, Japan, India, France and the United Kingdom combined. The DSA is composed of many different people with a wide spectrum of progressive views, but the central demands shared by most include a significant increase in minimum wage, tuition-free college, and more access to affordable housing.

Despite Trump’s victory in 2016, for every farmer in Idaho disillusioned by an increasingly automated economy, there is a recent college graduate struggling to pay off student debt and buy her first home. The former waxes poetic about the past while the latter tries to look to the future.

To start working toward these goals, young people organized in cities and on campuses across the country. Josh Behrens, MCAS ’18, founded the Young Democratic Socialists of America of BC in spring 2017 and posted an invitation in the Facebook class pages.

“The first meeting had maybe 15 people,” Vaccaro said. “And then after that membership dropped radically, because it’s hard to start a student organization here.”

Now, the group’s membership fluctuates to up to 20 members and meets regularly to discuss topics ranging from socialist theory, to articles in Jacobin and Baffler, or to vent, “… and have just sort of a cathartic release that we couldn’t get just from talking to our peers,” he said.

In addition to readings, the tight-knit group also engages in direct action events with other politically-minded groups on campus and has helped organize marches for a $15 minimum wage, against gun violence, and in solidarity with counter protesters in August 2017, when Boston hosted a Freedom of Speech rally just one week after Heather Heyer was killed by a white supremacist at a similar rally in Charlottesville, Va.

Although very active, the attention Young Democratic Socialists of BC receive has paled in comparison to the headway that the DSA has been making in other parts of the country.

In November 2017, DSA-supported outsider and Socialist Lee Carter defeated the GOP-backed incumbent Jackson Miller for the 50th district of the Virginia House of Delegates without almost any support from the Democratic establishment. And the DSA echoed its victory cry this past June when its endorsement Alexandria Ocasio-Cortez defeated 10-term Democratic Congressman Joseph Crowley in the race for New York’s 14th Congressional District.

Carter, a former Marine, and Ocasio-Cortez, a former bartender, are two unlikely candidates for a red or blue ticket in their districts. But by renouncing political action committees and focusing on local canvassing, each candidate was able to conjure in their constituents a hope that American politics could be more than a fat cat’s game of chess.

Vaccaro knows this hope exists in people, but he’s struggled to evoke it from students at BC, who, he finds, would rather stick to traditional party lines.

“I feel like even for people that study politics here, it’s almost like the veneer … of a career in politics is attractive because you can work in politics, and you can also be wildly wealthy with an extravagant lifestyle,” said Vaccaro. “And that, I think, isn’t really primarily what working in politics, or having political goals should be about.”

According to the New York Times, 70 percent of undergraduates at Boston College come from the top 20 percent of income brackets, and within that 70 percent, 16 percent of the student body come from the top 1 percent and 2.8 percent from the top .01 percent. By the time they’ve arrived on campus, many students have grown accustomed to a certain way of life paid for by their parents’ jobs in the capitalist American economy.

“[It’s] hard to question your role in the world in any way that’s going to be threatening because when all of your friends come from similar backgrounds, whether it’s white, upper middle class, upper class, you’re not really ever being confronted [by] existential questions about your role in the political community in the world in ways that you ought to be,” Vaccaro said.

But just because they’re 61 percent white and 70 percent privileged doesn’t mean BC students are incapable of engaging with Socialism. Some of the most successful Socialist countries–Denmark, Norway, and Sweden–are also white and privileged.

From Ocasio-Cortez to Albert Einstein to Martin Luther King Jr, Socialists are not united by racial, cultural, or socioeconomic backgrounds, but are bound at the core by a shared concern for the working poor and marginalized.

Despite the millions of capitalist-earned dollars used to build and maintain BC, its mission statement and the Jesuits who uphold its values are oriented toward the very concern for the marginalized shared by DSA members like Vaccaro. And while the DSA is a secular organization that holds positions on gay marriage and abortion contrary to Church doctrine, Vaccaro sees many more similarities than differences between the DSA and the Catholic Church.

In particular, Democratic Socialism has a lot in common with liberation theology, which traces back to Socialist revolutions that took place across in Latin America during the second half of the 20th century, and intertwines Christian concern for the poor with Marxist social analysis. The result is an array of critiques of capitalism, imperialism, and wealth inequality.

“Jesus cared for the poor and the people in society who needed the most help,” said Helen Haskim, treasurer of the Young Democratic Socialists of BC and MCAS ’21. “At BC service is sometimes thought of as something to put on your resume. My mission is to help those who didn’t who didn’t grow within the circumstances I did.”

Vaccaro, Haskim, and the other BC members are unique from typical DSA members because they engage with thinkers beyond the usual suspects—Marx, Engels, Lenin—and discuss the efforts of Catholic worker movement activists like Dorothy Day, who, beginning the 1930s, shined a light on the connection between the poor workers neglected by capitalism and the marginalized helped by Jesus.

The club is also planning to read and discuss liberation theologist and martyr Oscar Romero, who was assassinated while celebrating Mass in El Salvador in 1980 after delivering a sermon pleading soldiers to stop defending a government that was violating human rights. Romero was canonized last week.

“One of the ways I sort of stand out, at least among Socialists and leftists, is that I consider myself to be religious,” Vaccaro said. “I have sort of a fundamental belief that people are worth more than just being animals. People have an inherent worth that is elevated by their connection to God.”

In high school, Vaccaro and classmates served as pallbearers for the funeral of a homeless man without a family to give him a proper burial.

“On the bus ride home … I couldn’t stop saying to myself that the world doesn’t need to be this way. It is a product of political neglect that there are homeless people to begin with,” Vaccaro said. “There’s more homes in this country than there are homeless people. This is a decision that we’re all complicit in and seeing ourselves as part of a system that we can change, I think was the first step towards coming to radical politics.”

The seed of Socialism was planted when Vaccaro asked why things needed to be that way. It grew its first roots months later while Vaccaro was visiting the Vatican during the summer after graduating high school. He was in the Vatican gift shop getting an intricately decorative Eucharist set for his cousin who was being ordained a priest.

“You only get ordained once,” Vaccaro said.

After paying tourist prices, the family walked out and through a tunnel, where a homeless woman with a child reclined in her lap was sitting on the ground. His family walked right by her, and Vaccaro looked down at her before following them.

“Even now I can’t stop thinking about it because it’s such a grave injustice that we just spent all that money and then completely ignored this very clear example of someone in need,” Vaccaro said.

Vaccaro carried that memory with him to BC, to the first meeting of the Young Democratic Socialists of BC, to the small reading groups, to the direct action events, and will bring it back with him to Rome when he returns in spring 2019 to study abroad.

“Catholicism should be about that woman that’s sitting in the tunnel outside of the Vatican gift shop with her child,” Vaccaro said. 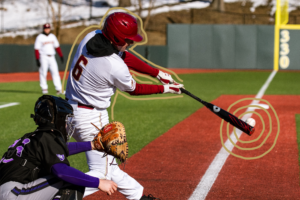 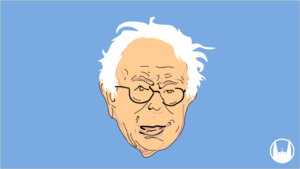