Home » Guest Column: A Letter to the Dean Calling for a Reconsideration of BC’s Alcohol Policy 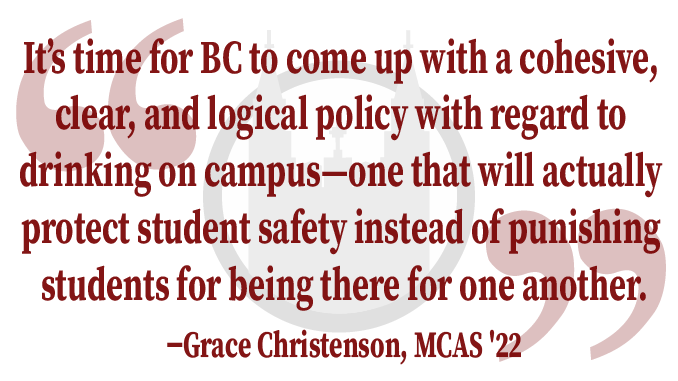 Guest Column: A Letter to the Dean Calling for a Reconsideration of BC’s Alcohol Policy

To whom it may concern in the Dean’s Office:

I wonder if this is the first time that a student who doesn’t drink has asked you to change your alcohol policy. I can’t imagine that it is, but I still think it’s worth taking a very public look at the way in which you have—intentionally or otherwise—implemented a policy that criminalizes the very thing your rhetoric praises: Students keeping themselves and others safe with regard to alcohol.

When I attended the requisite presentation concerning Boston College’s policies on drugs and alcohol at freshman orientation this past June, I was actually pleasantly surprised by what your office had to say on the subject of underage drinking. Associate Dean of Students Richard DeCapua led us through a presentation during which he acknowledged that underage drinking is virtually inevitable on college campuses and repeatedly underscored that the University’s main concern is for our safety. He even went out of his way to emphasize the University’s help-seeking policy, which exempts students who seek assistance for themselves or others “due to intoxication or drug ingestion” from disciplinary conduct. If that weren’t enough, the two mandated sessions of AlcoholEdu (which, for those who are unfamiliar, consists of an online series of educational exercises about how to drink responsibly and keep yourself and others safe regarding alcohol) seemed to corroborate the University’s prioritization of student safety above all else. It was only once I started speaking to current students on campus and reading through the alcohol policy again that I realized how far this was from the truth.

The official alcohol policy of BC, listed under section 4.3.1 of the Code of Student Conduct, explicitly prohibits students under the age of 21 from “possessing, using, being in the presence of, purchasing, transporting, selling, and/or distributing alcohol.” Simply being in the presence of alcohol is grounds for disciplinary action at BC.

Now, as I said earlier, I don’t drink. I have never had a sip of alcohol in my life, and I don’t plan to. But I still like to go out and engage in the social scene on campus, and I am more than happy to be the token sober friend who acts as the designated Uber-caller and human cane to help others safely get back to their dorms on particularly wild nights. I keep an eye out to make sure that those around me never reach the point of needing hospitalization, but if they ever did need medical attention, I would ensure that they received it. I am doing everything that your office says it wants students to do as far as keeping myself and others safe with regard to alcohol—yet, should I encounter some kind of law enforcement or University authority at a party where people were drinking, I would be punished for doing exactly what you asked of me.

This inherent contradiction of message and policy creates a dilemma for students like me. For one thing, if a student only abstains from alcohol out of fear of retribution, then surely they must wonder: If I’m going to get the same punishment for not drinking as I would for drinking, then why don’t I just drink like everyone else? The only other option, apparently, is staying away from the majority of social events on campus and becoming a recluse. For another, it puts students who opt to be sober in the position of choosing between looking out either for their friends’ safety or for their own disciplinary record, which is absurd.

So here I am, imploring you in writing to do as the Jesuits recommend and look at this issue through a lens of intellect and reason. It’s time for BC to come up with a cohesive, clear, and logical policy with regard to drinking on campus—one that will actually protect student safety instead of punishing students for being there for one another. I believe that your office wants the best for us, and I believe that actions speak louder than words. Please show us that you care. I know we can do better as an institution.

P.S. I think that both you and I know that the BC-themed ping-pong balls sold at the bookstore are not being used for wholesome, Friday night ping-pong tournaments. If you’re going to insist on prohibiting drinking games, at least stop profiting off students’ breaking that rule.

student life bc alcohol policy
On the Militarization of the Police
54th Head of the Charles Regatta, Boston’s Defining Social Substrate