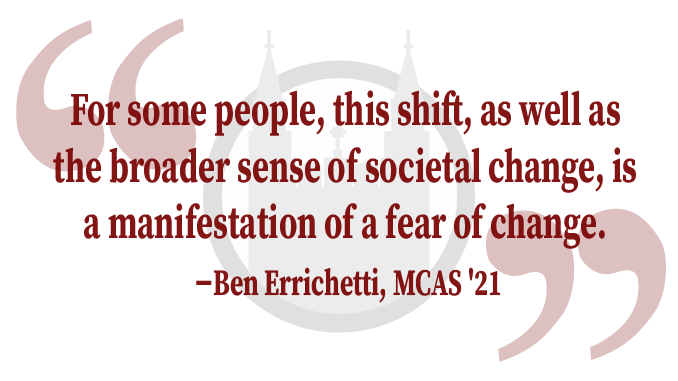 “Ugh. Millennials. Am I right? These young kids don’t know up from down nowadays! What’s going on here?!”

That’s my impression of every old stand-up comedian who really needs to retire. But it seems to be a common sentiment among older people that “kids these days” are in many ways unsatisfactory. And these days, the “kids” are millennials.

I use the term “kids” loosely, as the Pew Research Center defines millennials as individuals born between 1981 and 1996, which means the oldest of the lot are approaching 40. You could argue that any sort of generational divide is arbitrary and merely a marketing tool for corporations. I also believe, however, that as children grow up with different values than their parents and become contributing members of society, general trends of the day do shift. Even if the idea of a “millennial” is made up, that made-up idea does exist now, and as long as people believe in it, it has an impact.

What impact is that? What is affected by the millennial man—the bearded, glasses-wearing urban professional strutting in tight jeans while waiting in line at a food truck? What is all the hubbub about this guy anyway?

Well, mostly the ire of his parents. And apparently he’s killing a lot of industries. These things actually stem from the same place: fear of change.

As to the former, I think a lot of the stigma around millennials comes from the fact that parents have a natural inclination to impart as much of their own childhood onto their children as possible. Of course my dad wants me to drink Ovaltine and watch The Twilight Zone—that’s what he did, and in his mind, that stuff is amazing! To him, that is what being a kid is all about. But things change, and, even though I do love Ovaltine, I could never have experienced the same childhood as my parents. That, for any parent, is inherently frustrating. Not only does it signify a generational barrier between parent and child that can never really be overcome, but on a broader scale, it is indicative of the world changing, and of the fact that the world you once knew as a child is gone forever.

As to the latter, it is a natural progression in a free market capitalist economy for older outdated business to go under, and newer industries to replace them. The death of certain industries is an economic inevitability, not the result of millennial interference. For example, the cable industry is dying, not because young people are killing it, but because in comparison to the new streaming platforms that are popping up, cable is a lackluster product for an unreasonably high price.

For some people, this shift, as well as the broader sense of societal change, is a manifestation of a fear of change.

There’s a possibility that the notion of Mr. Millennial being an industry killer is propaganda perpetuated by failing corporations trying to vilify young people and keep old people on board for another cable package contract. The villainous nature of corporations and the many ways in which they manipulate the public, however, is outside the scope of this column.

So, as it turns out, millennials are bad, and old people are grumpy. But is it their fault? Are they wrong for being angry at the new generation and afraid of change?

No. That’s just human nature. My friends and I were flipping through channels the other day, and we happened upon Nickelodeon. This should have been a channel I was very familiar with—I spent a great deal of my childhood here—but what I saw in my dorm was completely foreign to me.

And at first I was angry. How dare they change the things I liked! Why would they do that? They were good, and I liked them! Then I felt bad for these young kids—my Nick shows were amazing and intelligent, and all they know is this new garbage. And what’s with all these weird YouTube personality vlogger types that are so popular now? I grew up on YouTube, and I don’t recognize any of the most subscribed channels anymore! What’s going on here?!

Basically, I turned into an old grumpy person, and I began to realize every old curmudgeon using minion memes on Facebook to complain about the youth was once a part of the young rebellious generation. I began to think about how my older brothers probably had the same thoughts as they got older and I was watching Nickelodeon. Or how my Dad would look at the cartoons I used to watch with utter confusion and even disgust. Or even how today we complain about how smartphones are killing intellect and personal communication, in the same way that Socrates complained about the invention of written language. It seemed as though the generational divide was entirely arbitrary, or at the very least some sort of misunderstanding.

In some ways, the evil millennial man has always existed, and always will, even if with each passing generation the names change. There is an inherent conflict between the young and old in society. The young will always bring new, disruptive ideas to a world dominated by the old. The young will always seem naive to the old, and the old seem antiquated to the young.

Perhaps you’re wondering, “Why should I care? I’m not even a part of this generation!” But generational conflict, by definition, spans time. The millenials that are so vilified in the workplace now will soon be the CEOs that sign our paychecks. Maybe they will think us lazy or entitled in some way. Not too long after that, our generation will occupy that space in society, and we’ll have kids, and those kids will be a part of a strange new generation that we don’t understand. Taking a critical look at our present can help prepare us for the future.