Home » At URI, Eagles Once Again Let Match Slip Away in Final Stages of Regulation 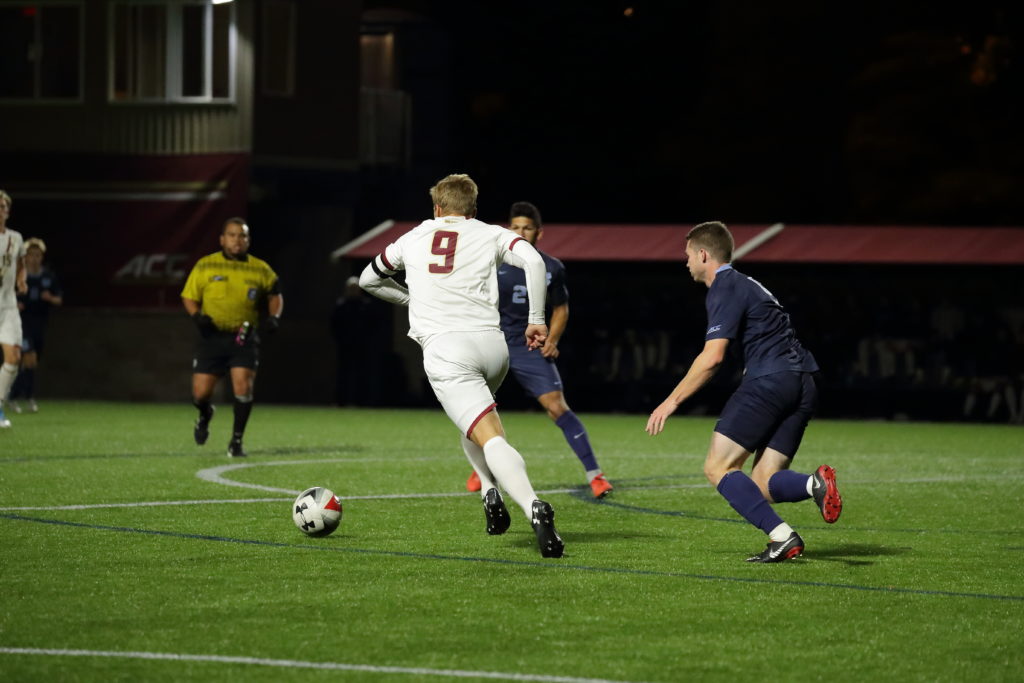 At URI, Eagles Once Again Let Match Slip Away in Final Stages of Regulation

In a season full of near-wins but marked by a lack of results, Tuesday night’s ranked matchup with Rhode Island—a team recently ranked as high as No. 23 in the country—was a chance for Boston College men’s soccer to finish its non-conference schedule with a winning record.

The Eagles have proved throughout the season that they can compete with pretty much anyone in the country—the thriller against No. 2 Wake Forest was evidence of that—but they haven’t been able to seal the deal and secure a quality win. Given another opportunity to earn a resume-boosting win against one of the best teams in the Atlantic 10, BC once again fell short, falling 2-1, and saw its losing streak stretch to four games.

Eagles (4-7-3, 2-5 Atlantic Coast) head coach Ed Kelly decided to shake things up with its starting lineup against the Rams (11-3, 4-2 Atlantic 10). Simon Enstrom was noticeably missing from the starting lineup, as was Trevor Davock and Kristoffer Konradsson, while Christian Garner started in goal—for his first appearance of the season—instead of Antonio-Chavez Borrelli.

The first half between BC and URI proved to be a rather sloppy, slow affair. The Eagles strayed offside and committed a pair of fouls within the first six minutes of the game, while the Rams were notably physical as well. Shots were hard to come by, but the pace picked up slightly near the end of the half. BC and URI totaled three corners each, but both teams recorded just three shots, while combining for 10 fouls.

At the beginning of the second half, Kelly’s lineup decision became clearer. Davock and Enstrom, with a half of rest, were unleashed in the second half, but Chavez-Borrelli and Konradsson notably still remained absent for the entirety of the game.

The back half of play yielded much more action than the front. In the 52nd minute, URI senior Chae Brangman slipped a pass through the Eagles’ defense to fellow senior Dominik Richter, who successfully converted the breakaway goal for his eighth of the season, a mark good for third in the A-10.

BC was not willing to go down without a fight, though, and it responded almost immediately. A mere four minutes later, Enstrom beat Rams goalkeeper Roger Penske at the right post, notching his ninth goal of the season. Kelly’s decision not to start Enstrom seemed striking, especially when one considers the senior’s impressive non-conference success, but it was a choice that paid off when the well-rested forward netted the equalizer.

For the next 15 minutes, BC and URI each had opportunities to score, but neither team was able to successfully convert. With only 18 minutes left to play, the game entered into a lightning delay for about 45 minutes, quickly bringing a back-and-forth matchup to a drawn-out standstill. After play eventually resumed, the fresh-legged Eagles and Rams each launched a bevy of shots, but Garner and Penske each stood strong in goal.

Unfortunately for BC, the final 10 minutes were once again its Achilles’ heel. The Eagles have lost games to No. 7 Louisville, No. 5 North Carolina, and the Demon Deacons in which they were tied entering the final 10 minutes of play but conceded late. That struggle repeated itself on Tuesday night in Kingston, R.I. In the 80th minute, URI’s Tyler Dicksen put a free kick into the box, where Peder Kristiansen played it to Brangman, whose shot found the back of the net, putting the Rams up for good.

The Eagles didn’t give up, letting off four shots and attempting two corners. But none of these chances resulted in a conversion, and thus, once again, BC let a match slip away in the final stages of regulation.

To say that this loss is discouraging for Eagles fans is an understatement. No matter how hard Kelly’s team fights, it is seemingly unable to finish. Granted, BC is amid a brutal stretch of the schedule, but it has still failed to pick up any big wins—aside from its upset of North Carolina State—despite being competitive. It’s certainly demoralizing for this team, as even a drastic lineup change that seemed like it would spark a much-needed victory wasn’t enough. Every game but one on the season has decided by one goal or less—which means that BC has the talent and the fight of a great program, but possess the record of a mediocre team.

The outlook for the Eagles doesn’t look great. With seven losses and another ranked opponent to face on Friday in No. 20 Syracuse for the regular season finale, the Eagles will likely enter in the ACC Tournament as a low seed. The game against the Orange could carry tremendous significance for the postseason seeding—currently, BC holds a one-point edge for the 10th seed. That one point is the difference between playing Notre Dame, a team the Eagles narrowly lost by a goal to earlier in the season, and playing Virginia Tech, an unfamiliar opponent.

On a broader scope, a win or draw with Syracuse—paired with a loss by Pittsburgh to No. 23 Notre Dame—would likely bump BC up to the ninth seed in the bracket, barring other results. The nine-seed takes on the eight-seed, which is currently N.C. State, a team the Eagles slipped by at home back on Oct. 5. The next game on the schedule for BC will directly affect the makeup of the conference tournament—a single-game elimination bracket that will mark the end of the Eagles’ season if they don’t flip the script and make a postseason run.