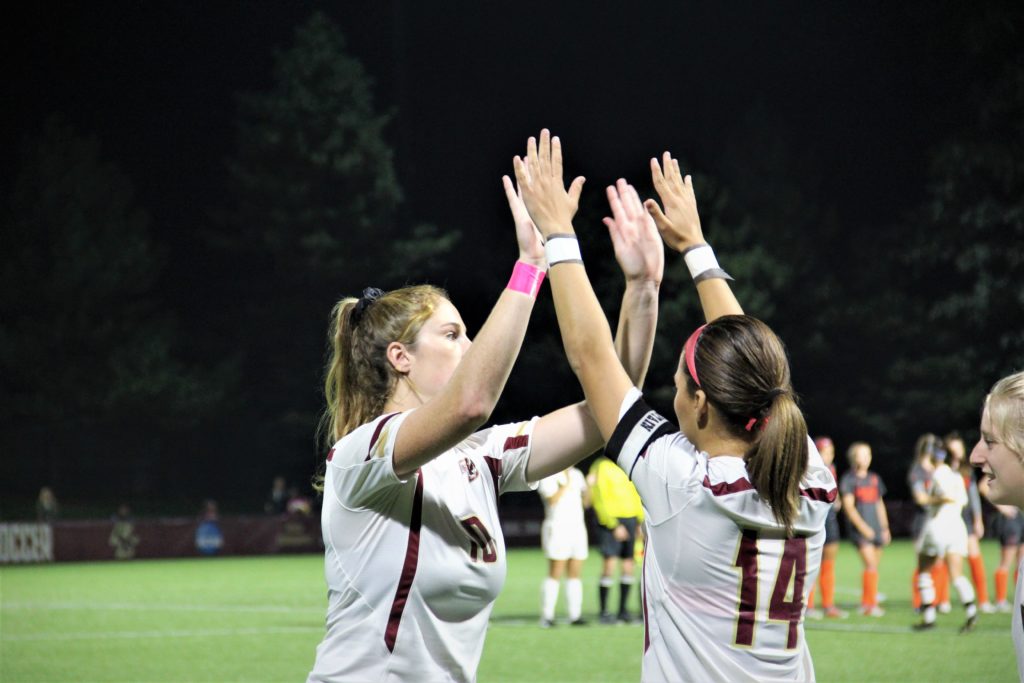 Eight teams make the cut for the Atlantic Coast Conference tournament, and while No. 11 Boston College women’s soccer has had a spot in the field locked up for quite some time, its results on the final day of the season could be the difference between hosting a home quarterfinal or hitting the road and likely never looking back. Back-to-back losses to first-place North Carolina and second-place Duke has left the Eagles in fifth, with the duo of Louisville and Virginia each holding a slim two-point edge.

So, while BC (13-3-1, 5-3-1 ACC) hosts Pittsburgh (3-14, 0-9) as it looks to finish the season with a spotless home record, head coach Alison Foley and fans of the program will likely be keeping a close eye on the scoreboard. Louisville hosts Virginia Tech, and Virginia faces North Carolina State at the same time, and if any of the two aforementioned teams lose and the Eagles claim a win, BC will get the relief of defending home turf. A loss or a tie would seal its fate as traveling, and outcomes from other teams below them—mainly Florida State or Clemson—could knock the Eagles down the seeding and into a tougher first-round matchup.

Who is BC playing?
Pittsburgh

Where is BC playing?
Newton Soccer Field, Newton, Mass.

How to Watch:
The game will be available on ACC Network Extra via WatchESPN.

2) Not to be lost in Coffey’s 32-point effort is the breakout season from Olivia Vaughn. The junior had 10 combined goals in her first 39 games on campus, but has sliced through opposing defenses for nine goals thus far, good for second on the team as well as in the conference.

3) The Eagles are third in the conference in scoring margin overall, but Pittsburgh will have its hands full when it arrives in Newton—BC has outscored its opponents at home by a ridiculous 29-4 margin.

1) Conference play hasn’t treated the Panthers well, as they’re winless in nine tries. In those nine games, Pittsburgh has been outscored 31-2, with both goals coming in a narrow one-goal loss to Miami. In the four ACC games since, the Panthers haven’t scored and have conceded 15 goals.

2) The only two players for Pittsburgh to have scored against an ACC opponent this year have been Ashley Moreira and Aideen O’Donoghue. Both have two goals on the season, while the offense is paced by Anna Rico with a trio of goals on the year.

3) The Panthers haven’t settled on a starting goaltender this season, with Amaia Pena and Katherine Robinson splitting time. Robinson was in net for Pittsburgh in its last game, a loss to Notre Dame, but one fact remains—regardless of who is in net, she’ll face a lot of shots. The Panthers have conceded nearly twice as many shots as they’ve attempted this year.

BC finished off the regular season last year with a road game against Pittsburgh, and it was basically a “win or go home” game. The Eagles needed a crucial win away from home to grab three more points in conference play to slip by Clemson and Louisville for the eighth and final spot in the conference tournament. And they got it. After playing to a 2-2 draw through regulation and the first 20 minutes of overtime, BC’s Gianna Mitchell converted a corner kick header off of a feed from Coffey to send the Panthers to the lockers disappointed and the Eagles on to a matchup with Duke.

All things considered, BC should roll over Pittsburgh. It’s a team that at one point was contending for the conference title against a team that hasn’t won an ACC game in its last 23 attempts. The Eagles boast one of the most dangerous scoring attacks in the conference, Pittsburgh struggles to prevent opposing forwards from getting shots off. BC has a top-five defense, the Panthers have just one player who’s found the back of the net three or more times. It’s a heavy imbalance on paper, and the Eagles are due—they dropped two close games to teams ahead of them in the rankings, and now have to get a win and pray for favorable results to host a home quarterfinal.

Featured Image by Hao Ran / For The Heights