Home » On the Back of Four-Goal Second Period, BC Trounces Holy Cross
Women's Hockey

On the Back of Four-Goal Second Period, BC Trounces Holy Cross

Three minutes into the second period of Friday night’s game at Holy Cross, Boston College women’s hockey only led the Crusaders—a two-year old Division I program playing its first season in Hockey East—by a score of 1-0. But the in span of 11 minutes, the Eagles poured on four goals, asserting their dominance as the conference heavyweight. Eventually, Holy Cross found the back of the cage, but its lone goal hardly changed the narrative. With a multi-score cushion, head coach Katie Crowley’s team coasted to a 5-1 victory, its sixth-consecutive win.

No. 6 BC (6-2, 3-0 Hockey East) and Holy Cross (0-6-2, 0-3) entered the game having never played each other, but the hierarchy between the two teams was on full display Friday night in Worcester, Mass. The Eagles have been a mainstay in the conference and have enjoyed great success in postseason play. They have made the NCAA Tournament eight-straight years, including three Frozen Fours in the past four seasons. Quite simply, the odds were stacked against a Holy Cross program that’s struggling to make its mark in Hockey East.

The first frame was mostly devoid of notable action, except near the end of the period. With Holy Cross down a skater, BC capitalized on the power play. Caitrin Lonergan and Cayla Barnes successfully maneuvered the puck around Holy Cross defenders to find Megan Keller, who converted her shot from the left circle. The Eagles didn’t exactly get off to a fiery start, but they possessed the lead by the first intermission.

When the second period ended, the Eagles had taken flight. The scoring bonanza started, as freshman Kelly Browne single-handedly logged a goal three minutes into the frame. This was followed up with goals by Lonergan, Kali Flanagan, and Lindsay Agnew. Browne’s goal was the first of her NCAA career and Flanagan’s marked her first scoring play of the season. With five minutes to play in the second period and a five-goal lead in hand, BC was firmly in the driver’s seat.

Just like they did against Vermont the previous week, the Eagles adopted a conservative approach to preserve their lead—and that they did. The last whimper came from the Crusaders as they finally etched their name into the scorecard, thanks to a Sommer Ross goal. But with only five minutes left of regulation, it was too little too late for Holy Cross.

To say that this was a dominant showing by BC would be an understatement. The score of 5-1 doesn’t quite do justice to the Eagles. BC nearly tripled the amount of shots that Holy Cross recorded. It outshot the Crusaders by an incredible margin of 56-19. Holy Cross was no match for the Eagles during faceoffs. BC won these showdowns, 39-20. Crusaders goaltender Julia Pelletier notched an impressive 51 saves, but the volume of stops is more of a testament to the sheer number of shots that BC put on goal.

Friday night’s game was another example of two season-long trends for the Eagles. First, BC boasts one of the most dynamic offenses in the country, as evidenced by the fact that the Eagles’ five goals came from five different players. Makenna Newkirk, Agnew, Barnes each stretched their point streaks to six games, and Keller extended her point streak to four games. Eleven different Eagles have scored this season, and 14 have recorded points.

Not only that, but Maddy McArthur continues to be a force in goal. After she was dusted by Minnesota Duluth early in the season, her play has only improved with each passing game. She earned her first shutout against UVM last week, and on Friday she only let up one goal. It certainly helps to have Olympic-level defenders in front of McArthur, but her play this season has been nothing short of phenomenal.

Now riding a six-game win streak, BC looks like a very strong contender to once again win the conference regular season title. Friday’s contest was just another reminder of how much distance separates the Eagles and most of the other Hockey East teams, especially those at the cellar like Holy Cross. 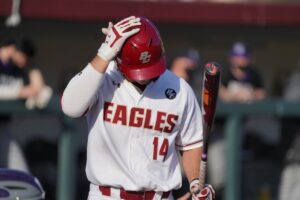