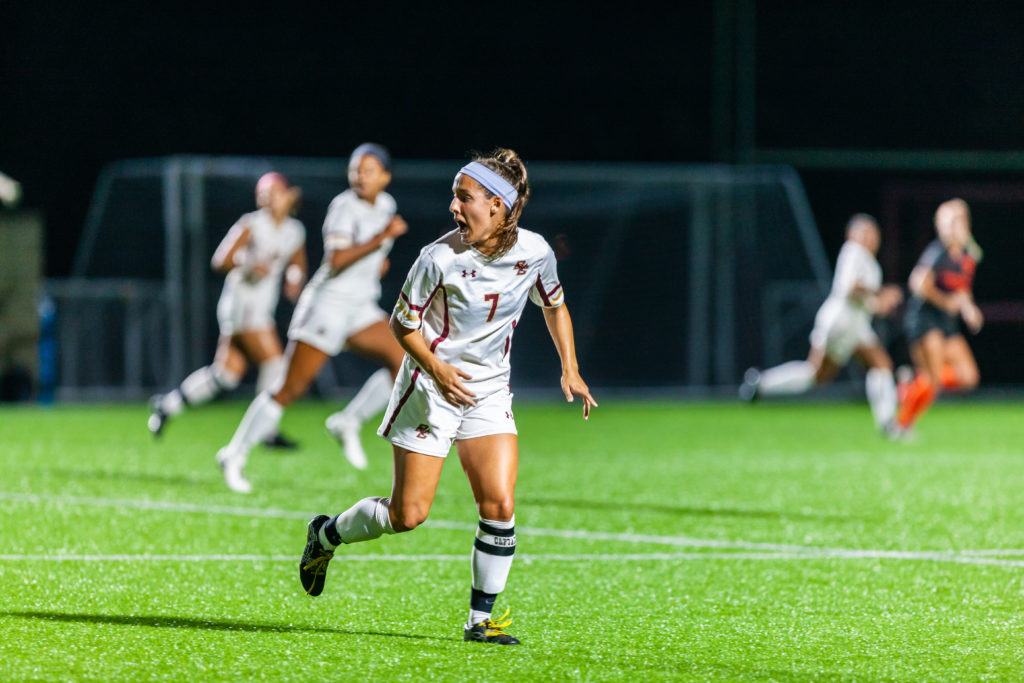 After dominating Pittsburgh in its regular season finale, Boston College women’s soccer begins play in the ACC tournament with a quarterfinal matchup against Clemson. The Eagles (14-3-1, 6-3-1 Atlantic Coast) finished the regular season ranked 19th in the country and fourth overall in the ACC, their highest spot in the conference table since 2011.

The Tigers (11-7, 6-4) hold the fifth seed after beating Syracuse, 3-0, in their last regular season game. It should be a tough matchup for BC, but with the support from their home base, the Eagles have a solid chance of advancing to the semifinals where they’d face the winner of top-seeded North Carolina versus Virginia Tech.

Where is BC playing?
Newton Soccer Field, Newton, Mass.

How to Watch:
The game will be available on ACC Network Extra via WatchESPN.

1) Sam Coffey ended the regular season with an ACC-best 12 goals and 14 assists for a total of 38 points. She has scored a goal or added an assist in 14 of 18 games this season. In the finale against the Panthers, she had two goals and two assists.

2) Jenna Bike continued a strong junior campaign with a single-game career-high of three assists against Pittsburgh, becoming the seventh player in program history to record three assists in one game.

3) The Eagles finished the season with six ACC victories, making it the fourth season since BC joined the ACC that they have had six conference wins. Its overall total of 14 victories is the most by a BC team since 2013, when it went 13-10-1.

1) Mariana Speckmaier scored her ninth goal of the season against Syracuse. She leads the team in goals this season and is tied with redshirt senior Miranda Weslake for the lead in points, with both boasting 19 points.

2) Junior goalkeeper Sandy Maclver had her seventh shutout of the season over Syracuse. It was the 12th of her career as a Tiger.

3) Sam Staab had her 10th assist of the season against Syracuse, giving her a total of 32 assists for her career—a pace that has her firmly in the Clemson record books.

BC played Clemson in the regular season, facing the Tigers at home on Sept. 30. The Eagles came away with a narrow 2-1 victory. Olivia Vaughn scored both of BC’s goals, with the second the game-winning goal in the 82nd minute of the match.

The Eagles must dominate on offense and continue to execute well to slide past the Clemson defense and find the net. They need to continue to work together to make good plays on offense, utilizing the skills of Coffey, one of their leading attackers. If their offense can find the back of the net early in the first half—like they did against UNC and Pittsburgh—they can put more pressure on as the Tigers have to play from behind.

This matchup won’t be easy against a defense who has played well as of late and had a shutout against the Orange. Clemson is a strong team both offensively and defensively. Its leading attackers, Speckmaier and Brooke Power, work well together—BC will need to keep a close watch on them and limit them from having too many opportunities to score. The Eagles’ top-five defense poses a major impediment to the Clemson offense, but needs to remain cautious, alert, and quick on their feet when defending the net against this tough opponent.