Home » Living in a Post-Truth World 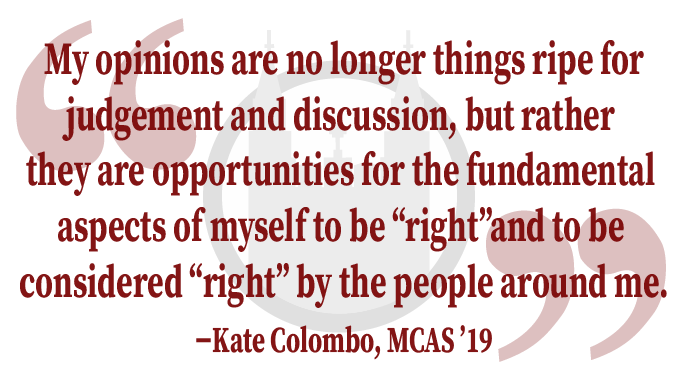 Living in a Post-Truth World

In an age of “fake news” and “alternative facts,” it’s hard to know what to believe. We seem to be in an age where people want to think for themselves and think critically, but also want all of their ideas to be validated by external sources. We want to believe what is cool to believe, to believe what the system doesn’t want us to believe, to believe what’s right but without needing to defend its rightness. This is not an atypical desire: When we are proven wrong, this correction is accompanied by a host of emotions—embarrassment being among them.

According to Susan Krauss Whitbourne, a doctor and writer for Psychology Today, “Humiliation is defined as the emotion you feel when your status is lowered in front of others. You may feel annoyed with yourself when you make a mistake or fail to know an answer, but unless others are around to witness it, that’s all you’ll feel. You generally need someone else on hand in order to feel humiliated by mistakes.”

This sensation is, in my estimation, likely compounded by the technological age and our ability to have the right answer at our fingertips at any given moment—if you can Google it, you no longer have an excuse to be wrong. Because we’re aware of how easy it is to be right and how difficult it is to be wrong about any given piece of information, we feel all the more mortified when we don’t have the answers.

Thinking about more nuanced conversations, then, we can be intimidated by the lack of definitive rightness. This has led to a shift in language over the years—it’s very rare that I hear a fellow student say “I think” when defending their position, but rather “I feel”: “I feel like Age of Ultron was worse than Infinity Wars,” or “I feel like standardized testing is a scam.” This kind of visceral language positions us to regard our opinions less like malleable ideas we’ve informed with facts and more like personal truths which help shape the foundations of our personalities, representative of who we are as people, illustrative of our particular tribe. My opinions are no longer things ripe for judgement and discussion, but rather they are opportunities for the fundamental aspects of myself to be “right” and to be considered “right” by the people around me. I am me, and “me” is made up of opinions validated by other people like me.

This line of thinking has been called “post-truth” by writers of the Boston Globe, the Washington Post, and countless other journalists discussing this lexical evolution after the Oxford dictionary called it 2016’s “word of the year.” According to the dictionary’s editors, post-truth is “relating to or denoting circumstances in which objective facts are less influential in shaping public opinion than appeals to emotion and personal belief.” Stemming from a kind of cynicism  which is skeptical of even the idea of objective truth, this form of rhetoric displaces the importance of truth and replaces it with “what is true for me.”

On the one hand, this may have several unacknowledged benefits. It gives us the opportunity to be more sensitive to other people’s feelings and to consider lived experience as a necessarily genuine representation of reality from another person’s perspective. We are forced to acknowledge the nuance and multiplicity of complicated issues, recognizing that maybe no one person is completely “right” or “wrong” on the issue. This can be very good, given that historically we have discounted lived experience as little more than anecdotes, exceptions that prove the rule. We have regarded feelings as the wimpy things that get hurt when you “can’t handle” whatever task is at hand, or as things that inherently cloud our judgement.

On the other hand, though, this also creates a void in the conversation where objectivity was—a space to be populated by disinformation, misinformation, and worse, non-information (such as the recent trend among corporate entities to release memes and other entertaining non-sequiturs on social media rather than information to advertise their product). The introduction of this space between right and wrong, true and false, allows for everyone’s opinion to be at least kind of “right” while the only people who are “wrong” are the people who disagree, the people in the other tribe. Similarly, because of this phenomenon and our ever-increasing inclination to judge our opinions as extensions of ourselves, we are positioned to consider any opposition as a personal attack made by an enemy of the collective.

One only need examine the current political spectrum to see this in effect. There are many Republicans who view themselves as people who prefer smaller governments and prioritize individual freedoms over the good of the state as a whole. Many Democrats, likewise, view themselves as people who prefer a greater scope of regulation and prioritize the good of a community over individual liberties. On the surface, this delineation of ideologies sounds like two equally valid ways of stratifying the priorities of a state. How can something this seemingly moderate lead to the vitriolic aggression between the two parties that we see today? It’s because rather than viewing any disagreement as just a disagreement, we see it as a conflict between two opposing teams, and we are supposed to pick a side. Suddenly, Republicans don’t want small government, they’re “religious nutjobs” who support “fake news.” They’re “misogynists, racists, and homophobes.” And Democrats don’t want more regulation, they’re “bleeding heart libtards” and “members of the deep state” and “baby-killers.” We are tribal, defining ourselves as much by those we stand against as those we stand with. We crave this conflict, this circus, because we want to be right and fear being wrong.

In a world where feelings are more valid than facts and our feelings are organic, important, and worthy of expression, our opinions are therefore extensions of ourselves. To disagree with an opinion is to disagree with the foundations of one’s personhood, and that is dangerous.