Eibhear Walshe, director of creative writing and senior lecturer at University College Cork, broke down the historical details and inspiration for his book The Diary of Mary Travers: A Novel Tuesday night. Walshe took audiences through the fascinating story of a woman with a tenuous but important link to Oscar Wilde in a lecture he gave in the Connolly House.

The initial impetus for Walshe’s fascination with Travers came while working on his book Oscar’s Shadow: Wilde, Homosexuality and Modern Ireland. Walshe repeatedly came across a libel court case he dubs “the other Wilde trial.” This case was between Oscar Wilde’s parents, William and Jane Wilde, and a woman named Mary Travers. The Wildes were a widely known and admired couple in Ireland (William, a renowned surgeon, and Jane, an acclaimed poet).  Mary Travers was a young woman from a poor background, neglected in society. What was the link between them? The 1864 trial illuminated her existence, but after it concluded, she practically disappeared from history.

In his novel, Walshe narrows in on three topics: why Mary Travers was so disliked in society, how she was connected to the Wildes, and how this connection ultimately haunted her when Oscar Wilde went on trial in 1895—31 years after her own trial with the Wildes.

Walshe originally intended to write a biography about Travers. He was limited, however, by the availability of verifiable historical evidence. Instead, he decided to write a novel, his first novel.

“One of the things a novel can do is attempt to advance a possible reading of what we just don’t know: the private emotions behind the public facts,” Walshe said.

In writing a novel, Walshe offered his story as one possibility of what could have happened during this time. The story takes shape as a diary, bringing Travers’ voice to life, portraying her as a woman deserving of sympathy, an element lacking in most biographical depictions that portray her as hysterical, jealous, and unbalanced. He adopts the mindset of Travers, of a young woman in the 19th century, channeling the emotion he thinks she felt strongest at the time of Oscar Wilde’s trial: panic.

“If you’re a writer, you have to make the leap to attempt to live within these voices,” Walshe said.

At first glance, the only thing that connects Travers and the Wildes is the trial, but in reality the connection goes back much further. Travers was a patient of William Wilde. She was taken into the Wildes’ home and was encouraged, especially by Jane, to write.

Walshe also strongly suspects she began an affair with William, which is how he depicts their relationship in his novel. This young woman, a nobody from a poor background, is embraced by one of the most well-known couples in Ireland at the time. Things start to go wrong from there.

Mary starts to unravel, and she becomes enraged with the Wildes. When Jane can’t stand it anymore, she sends a letter to Mary’s father, which Mary in turn steals and uses to sue Jane for libel. Travers wins her case, but her worth is equated to a farthing, one quarter of a penny. Travers walks away scathed and shunned, with her reputation ruined. And when Oscar Wilde is on trial in 1895, she is forced to confront her past. 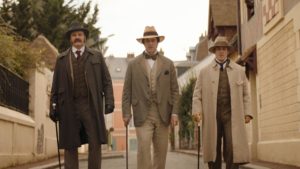