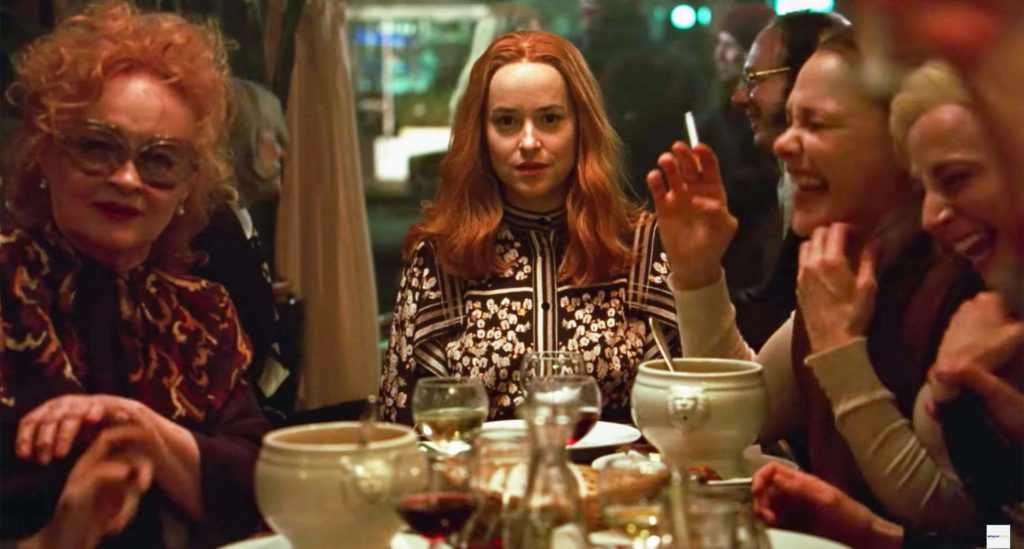 At the start of Suspiria, it’s easy to feel somewhat secure. The remake of Dario Argento’s horror flick is set in drab 1977 Berlin, amid the turbulence of left-wing terrorism, and the film is anchored, at least, to the original film’s time and place. But delving into the Markos Dance Academy, things quickly take a turn for the surreal. Within its walls, it’s typical dramatics among the young dancers: ambition, backstabbing, power struggles. Beyond the jostling, though, there is something much darker at play.

Arriving at the academy full of sophisticated Europeans, timid protagonist Susie Bannion (Dakota Johnson) is an obvious outsider. Having grown up in a strict Mennonite household in Ohio, she is untrained, yet she possesses a raw talent that intrigues artistic director Madame Blanc, played with cool charisma by Tilda Swinton. In a cringe-inducing scene, Susie dances violently and ferally, her limbs striking the air and her breath coming out of her chest in quick gasps. As she figuratively takes the place of former lead dancer Olga (Elena Fokina), she also physically maims her, snapping her bones and disfiguring her body, destroying her talent with every move she makes. The ferocious competition of the dance academy is taken to another level by the witchcraft at work.

The witches in question, a group of eccentric matrons who lead the academy, seem benignly kooky at first, with their flamboyant outfits and tipsy great-aunt dispositions. But it is soon clear that they are capable of unimaginable brutality, and the contrast between the ordinary and the savage is what makes Suspiria so disturbing. The camera jerks and swoops woozily, zeroing in on details with sudden paranoia. The atmosphere is tense and unpredictable—one moment the matrons are chatting around the dinner table, the next one of them is stabbing herself in the neck.

As Susie quickly rises through the ranks of the academy, she encounters signs that something is amiss, but chooses to sell her soul, in a sense, in order to reach her full potential. After all, she has fled her traditional, God-fearing family in order to join what turns out to be a coven. She has willingly crossed the line from austere order to extravagant chaos, self-denial to hedonistic bloodshed.

Following a parallel path of discovery is Dr. Jozef Klemperer (speculated to also be played by Swinton, despite the denial of director Luca Guadagnino). He initially dismisses the claims of his patient, former lead dancer Patricia, that the academy is run by witches. But after she disappears, Klemperer soon grows suspicious and investigates the academy. Klemperer is no match for the coven, though. Even more cruel than being swiftly murdered, Klemperer is lured to the academy by a woman who appears to be his long-lost wife. But to his dismay, his wife vanishes into thin air and is replaced by a floating matron. In the real world, the doctor was in control, dispelling the wild tales of his patients with a firm rationality. But when he comes face to face with the surreal world of the witches, he is powerless.

The veneer of normality crumples entirely at the film’s climax, as the world is bathed in crimson light and the dancers writhe around naked in a bloody ritual, like a Hieronymous Bosch painting come to life. Susie claims her place as the new leader of the coven and purges it of potential enemies, exacting bloody vengeance in a scene made strangely emotional by a melancholy Thom Yorke song. Having been sculpted by the matrons into a formidable witch and skilled dancer, Susie now takes on the role of mother, referring to the other dancers as her daughters. The cycle is completed, and the coven lives on. The coven has no need for men. It is unshaken by the events of the outside world, unrestrained by its laws and rules. All that matters are the women, and the beautiful, terrible power they wield. 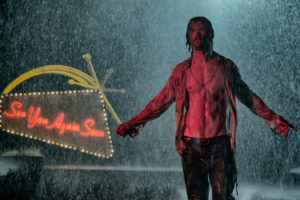