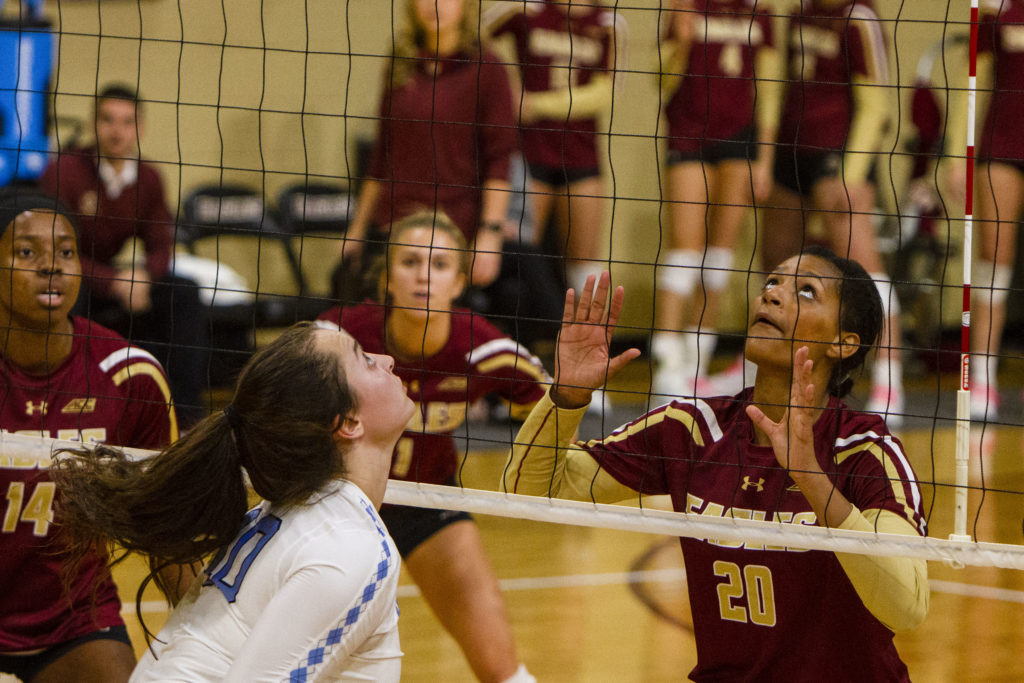 Coming off a four-match homestand in Power Gym last weekend that culminated in a much-needed win over North Carolina to snap a lengthy losing streak, Boston College volleyball hit the road hoping to tally two more in the win column. The Eagles would have to clean up their offensive strategy if it were to take down Notre Dame and No. 22 Louisville in the next travel stretch. Instead, BC suffered another round of road struggles this past weekend, dropping two close four-set contests. The Eagles (13-11, 3-9 Atlantic Coast) have now dropped nine of their last 10 games and memories of nine consecutive wins to open the year are slowly fading.

The weekend finale—based off of Notre Dame’s weak defense that entered tied for last in the conference—was expected to be a battle of the offenses. The Eagles failed to capitalize, however, and instead hit a season-low 0.033 clip on the day, with the Irish recording 20.5 team blocks to BC’s five. The result was as expected—Notre Dame (14-8, 8-4) dropped the first set, but responded with a trio of wins in quick succession. The Eagles managed just eight points in the second set, a woeful showing that reflected the conference struggles that head coach Jason Kennedy’s team have ran head-on into.

In contrast to previous games, however, BC was able to set a fast pace immediately. This was in large part due to Clare Naughton, whose two kills and block helped the Eagles grab an early 3-0 lead. Notre Dame responded by edging the Eagles 6-5 over the next 11 points, but BC clung to the set to maintain a narrow 8-6 advantage. At the first Irish timeout, the Eagles led 12-8, and soon headed to their own bench with a 15-10 lead. BC took the court with a 3-1 run off the break, widening the score to a seven-point advantage. The Irish prepared to come from behind with a 3-2 run, but it proved too late, as BC responded with a 5-2 surge to seal the set, 25-16.

It would be the only set the Eagles could win against their hosts, though, as the Irish flipped the script in the second frame, controlling the court with an aggressive offense. After prompting an early BC timeout, Notre Dame continued to ride the wave off the break, building a seven-point lead. The Eagles answered with a 5-2 run of their own, but the Irish broke down the BC defense with 13 unanswered points to cinch the second set, 25-8.

The Eagles were not prepared to lose their fight, harnessing some of their early-game energy to come back from a 10-point deficit in the third frame. The effort was deficient in grasping a lead, however, even as four unanswered Eagle points forced the Irish into a timeout. Notre Dame widened the moderate 19-13 lead out of the break by edging BC 6-5, finishing off the frame and taking the game advantage.

It seemed as if Notre Dame would take the fourth set unhindered, until BC came from behind once again in a desperate effort to force a fifth frame. The Irish had established an early three-point buffer, and the two teams evenly split the next six points after an Eagles timeout. Notre Dame pulled away, edging BC 4-2 until the Eagles grasped five of the next eight points to trail by three, 16-13. The two offenses continued to trade short runs, and BC scrapped its way to a narrow two-point deficit. Notre Dame took the final three points, however, claiming the game and the set, 25-20.

The Eagles experienced a similar start to the weekend, opening with an aggressive game pace against Louisville, and stole the first set Friday night in Cardinal Arena. The Eagles’ strong offensive showing ultimately fell victim to a sterling Cardinals defense, however, and the result was another conference loss in four sets.

The first set was a scrappy win for the Eagles, who found themselves locked in a draw at five in the early going. BC pulled away for a 15-9 lead at the media timeout, only to return to the court and trade points with the Cardinals (17-6, 10-2). With the help of junior Cat Balido, who led the Eagles with 13 kills throughout the match, the Eagles were able to maintain a 22-14 lead. The second half of the frame saw a brief hiccup, as Louisville went on a 4-1 surge to force a BC timeout. The Eagles held onto the set, however, and cinched the win at 25-18.

The beginning of the second set mimicked the first, with the two teams trading short runs and tying through 11 all. Louisville managed a 3-1 run, but the Eagles responded with their own three-point surge, taking the lead 15-14. The offenses battled at the net through a 19-19 knot, before Louisville posted a clean 6-1 run to take the set.

The Eagles’ defensive strategy began to fray in the third frame, as the Cardinals grasped an early 4-1 advantage, eventually prompting an Eagle timeout with a 10-4 lead. The break proved beneficial for the Eagles, who hit the court with an 8-4 surge that forced the Cardinals to their bench. BC appeared ready to come from behind, edging Louisville 5-4 over the next nine, but the Cardinals clinched the last seven points unanswered by the Eagles, taking the third frame.

BC was prepared to take the game to a fifth set, posting a speedy five points on the Cards within the first few minutes of the fourth frame. The Eagles maintained the five-point gap later at 10-5, until the Cardinals went 6-1 to tie the middle of the set. The two teams evenly split the next eight points before BC harnessed a 19-17 lead. In true form, however, the Cardinals managed a late 8-4 run to take the final set 25-23.

The Eagles continue to play on the road with a Halloween game against Syracuse. While Kennedy’s reinvented team got off to a historically fast start in non-conference play, the Eagles still have plenty of room to grow in competing with ACC opponents—it’s clear that BC, understandably, isn’t quite up to par with one of the toughest conferences in the country.