Two minutes into the second half of Boston College men’s soccer’s first-round ACC Tournament matchup against North Carolina State, Wolfpack midfielder Aidan Foster let fly with a shot that Antonio Chavez Borrelli was able to parry. Unfortunately for the Eagles, he was only able to push the ball directly into the path of N.C. State forward Ivy Brisma. With Chavez Borrelli out of position, it looked a certain goal for the Wolfpack and, with the Eagles trailing by a goal already, perhaps the end of BC’s season.

Abe Bibas wasn’t having it. The senior defender scrambled back to the goal line and managed to clear the shot off the line, giving the Eagles renewed energy. And minutes later, when he scored to tie the game, it looked like all the momentum had shifted toward BC. That wasn’t necessarily the case, though. In a perfect summation of the Eagles’ season, their efforts weren’t enough. N.C. State fought back, scoring two goals late in the second half to claim a 3-1 victory and end the Eagles’ season.

When the game started, the Wolfpack immediately took control. Just over a minute into the game, Gabriel Machado saw his effort palmed away by Chavez Borrelli. The Wolfpack continued to press, and eight minutes later won a dangerous free kick opportunity on the left wing. Brad Sweeney took the free kick and whipped a perfect cross into the box. The ball missed the cluster of players scrambling to get a touch and instead snuck inside the far corner, with Chavez Borrelli unable to reach it in time.

Now in need of a goal, BC picked up the pace. Kristofer Konradsson found space for the Eagles’ first opportunity of the game, but his long-distance try was blocked by an N.C. State defender. Any sustained offensive effort for BC was broken up by the physical nature of the game. Amid the occasional chance, the teams combined for 20 fouls and three yellow cards in the first half, and even when the Eagles did find shooting chances, they weren’t able to hit the target.

Konradsson pushed another drive from distance wide, while Simon Enstrom and Heidar Aegisson both watched shots ricochet off determined Wolfpack defenders. On the other end, David Loera drew another save out of Chavez Borrelli, and Simon Blotko skied a shot over the bar shortly before the halftime whistle.

When the second half began, N.C. State unleashed a barrage of shots on the BC net, looking to put the game out of reach. After Bibas’ goal-line clearance, Loera missed over the crossbar, and A.J. Seals had his shot blocked. Shortly after, a header by David Norris off a corner kick was stopped by Chavez Borrelli. Much like the Eagles in the first half, the Wolfpack wasn’t able to hit the target. And eventually, BC made N.C. State pay.

Callum Johnson created space and unleashed a shot from distance that N.C. State goalkeeper Leon Kropf pushed away. Aegisson was able to control the rebound on the right side of the box and lofted it back to the far post, where Bibas dove to nod it in and tie the game at one.

N.C. State didn’t wait long to respond. Just eight minutes later, the ball was played out to Machado on the left wing. The junior took his time, waiting for Loera to make a run through the box. No BC defender picked up Loera, and the sophomore ran onto Machado’s ball unmarked, calmly slotting the ball inside the far post to restore the Wolfpack advantage.

The Eagles tried to respond again, but were constantly frustrated by a well-organized N.C. State defense. They began to commit more players forward, and eventually the Wolfpack took advantage of the BC press on the counterattack.

Sweeney led the break, taking the ball into the BC box and picking out Alex Bautista inside the box. Bautista made no mistake, slamming the ball past Chavez Borrelli and putting the finishing touches on N.C. State’s win and, in effect, the Eagles’ season.

The loss was an apt illustration of BC’s 2018 campaign. The Eagles were often competitive with opponents, but simply failed to capitalize on a number of opportunities, often falling victim to mental mistakes. Fourteen of BC’s 16 games this season were decided by one goal or less, and yet the Eagles finished the season with a record of 4-8-4 and were winless in their last six games.

For BC fans, it’s undoubtedly frustrating that a program that played opponents as good as No. 1 Wake Forest close bowed out in the first round of the ACC Tournament for the second-straight season. This is a team that has talent, but will have to find ways to be more cohesive and disciplined, as well as replace the production of senior star Enstrom, if it wants to improve at all next season. 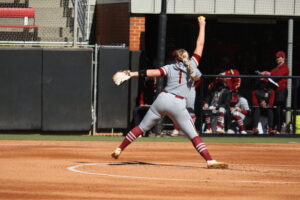