Sentiments of inclusiveness and empowerment rang through the Cutler Majestic Theatre at Emerson College early Tuesday evening as a group of impassioned teenagers took to the stage to examine gun violence and reform in the United States.

The teenage panelists spoke in depth both about their motivations behind activism as well as what they believe to be the causes of gun violence.

Fiona Phie, a student at the University of Massachusetts Boston, was inspired to act because of the impacts gun violence had on her own childhood.

“I learned to normalize violence in my home, in my streets, and in my school,” Phie said.

Phie described one experience she had seeing a recent victim of gun violence. Instead of feeling shock or empathy, she disregarded the victim and instead went to have lunch, numb to the brutality of guns. It was only after the fact that Phie realized the extent to which violence had affected her everyday life—which prompted her to become an advocate for gun violence prevention.

Likewise, Aalayah Eastmond chose to become involved as an activist because of her status as a survivor of gun violence. Eastmond was a junior at the Marjory Stoneman Douglas High School when Nikolas Cruz opened fire and killed 17 innocent people.

“On February 14th I was in room 1214, which was the third classroom the shooter shot into,” said Eastmond. “He shot six of my classmates and murdered two … so now, that has really pushed me to speak out.”

Michael Martinez, a student at Weston High School, and Jack Torres, a junior at Somerville High School, said that they chose to speak out and become activists because of their “white privilege,” which they believe provides them advantages that enable them to reach and educate greater audiences than their minority peers might be able to. They feel it is their responsibility to advocate for minorities who are disproportionately affected by violence.

A focal point of the entire discussion came when the panel unanimously agreed that there needs to be more inclusiveness and even more diversity in the March For Our Lives movement.

Michael Martinez was the first to concede that during the first months of the movement, its scope was too narrow, focusing only on white suburban neighborhoods.

Other members of the panel agreed with Martinez. Bria Smith, a high school senior from Milwaukee, emphasized that the movement should belong not only to white privileged students, but minority and inner city students as well. Minority students are more often than not the real victims of gun violence, and the focus should be on them, she argued.

The most impassioned moment of the panel took place when the activists discussed the possible causes of gun violence. The panel attributed gun violence to systematic oppressions, white supremacy, racism, mental illness, and hypermasculinity. The theater, packed with college students, overwhelmingly agreed with the panelists on these controversial topics.

The motivations behind the panelists’ activism are no doubt diverse and unique to each of them, but together they form a cohesive voice for the March For Our Lives movement. Each of their personal lives has been touched by gun violence, and they have used their stories and platforms to seek a future where this violence no longer exists.

The panel left the audience with one final message: Teenagers and victims of gun violence are no longer willing to be complacent.

The panelists heavily stressed the importance of voting, specifically for young and diverse candidates, this midterm.

Featured Image by Lorenz Chen / For The Heights 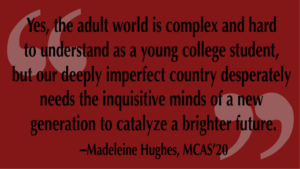 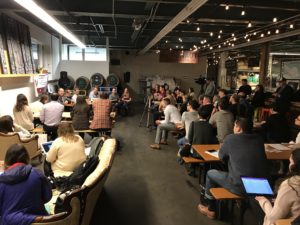