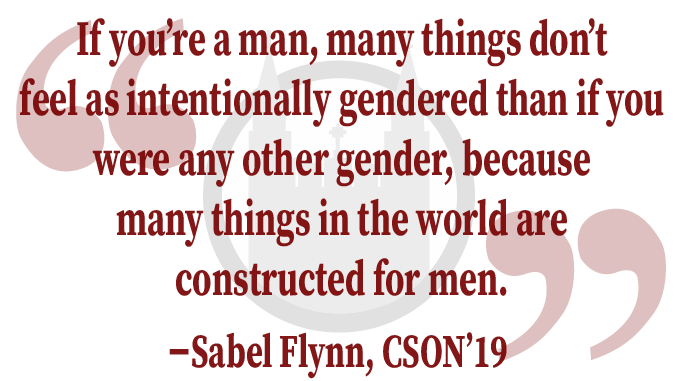 I love Halloweekend for many reasons, but I especially love seeing people that have “grown out” of dressing up ignore those norms and get dressed in costumes anyway. The norms around gender and presentation also disappear among my peers. People can dress in drag with confidence and have their crafted looks appreciated! It makes me think about the presentations we show the world every other weekend of the year. RuPaul famously said, “We’re born naked and the rest is drag.” I reflect on this quote a lot, especially recently, as I’ve come out to more people about my gender experience.

I often feel like manhood is an exclusive club, to which it is difficult to gain access. Even many cisgender men feel insecure about their manhood, and it has only been very recently that I’ve given myself permission to conceptualize myself as a “man.” This is a big step for me made possible with the support of my friends and loved ones. I am so grateful to have a girlfriend who calls me “boyfriend” without a second thought.

Really, there is no reason I cannot consider myself a man. Manhood, after all, is entirely constructed and so far removed from anything rooted in nature. Other men are very protective of this concept of “manhood,” and our culture fosters great insecurity among men, wondering if they are man enough. Pundits exploit these anxieties with male vitality supplements on the market to preserve a fictitious “male essence.” When I spoke to my cisgender male friends about manhood, however, I learned that it is more of a delicate and complicated identity to claim than I had assumed. And as someone who was not assigned “male” at birth, I feel the concept “manhood” is especially inaccessible to me.

Manhood and womanhood can be more abstract than people may realize. Why is it fun and cool for a guy to wear a dress on Halloween but awkward and out of place any other day of the year? Is he less of a man? Or is she less of a woman if she has a penis?

I feel like many people invoke universal authority when sharing or writing opinions about women and gender neutral people, even if they are not speaking from experience. But it seems like men and manhood are topics people find unquestionable and are scarcely as explored in think pieces and social conversation. Maybe that’s just how I feel because, as my two interviewees will cite, people who identify with masculinity are often extremely and constantly insecure about it—maybe I’m just projecting my own insecurity.

Men tell me that expressions of manhood on campus are very homogenous. I interviewed my male friends to understand some more perspectives.

One friend told me, “like many people say, [Boston College] really struggles with homogeneity and as a result, there’s a lack of representation with respect to varying masculinities … The examples of masculinity that I witnessed were precarious, and I thought I would need to alter my own gestures, my voice, even being friends with fewer girls, in order to get the social mobility I craved…[freshman year] was such a confusing and disappointing time because in high school I didn’t feel like people saw gayness as some kind of opposition to masculinity.”

I learned that sexual conquest of women was a big part of traditional masculinity at BC. Explicit and aggressive assertions of heterosexuality are weaponized in order to maintain a masculine ideal.

One friend shared with me his experience as a man at BC who doesn’t drink or participate in hookup culture. He said, “I felt very insecure in my masculinity around [my roommates] because I felt like I wasn’t living up to the expectation… I had unsatisfying relationships that mostly just validated me without being meaningful… I still have a sense that I’m an outlier.”

In April, Harris O’Malley—better known as Dr. Nerdlove, a popular relationship blogger—wrote an insightful piece called When Masculinity Fails Men for The Body Is Not An Apology. On defining the practical application of masculinity he writes, “The definition of “masculinity” pitched to men—especially young men—is one of violence, social dominance, anti-intellectualism and aggressive, even uncontrollable, sexuality.” He later speaks to the unattainable and fragile ideal of masculine identity writing, “Every ‘real man’ is in constant danger of being downgraded back to ‘pussy’ or being somebody’s ‘bitch.’”

Why is manhood such an elusive and exclusive identity? When I feel insecure about my gender, I remember that hey, plenty of men paint their nails like I do. Plenty of men wear earrings like I do, and many men even have breasts. What genders a body is entirely constructed by the cultural norms we live in, and there is no reason I cannot claim manhood as a part of me. Still, I’m not sure that’s what is right for me.

As I did in my past column about gender, I would like to invite my readers to investigate what about their bodies is gendered and why. Understand what experiences on campus are gendered experiences, and why. If you’re a man, many things don’t feel as intentionally gendered than if you were any other gender, because many things in the world are constructed for men.

Sometimes I wear my gender like a costume, but that’s okay. I’ve always loved to play dress up.

student life bc masculinity manhood
Halsey Parties Through Life in “Without Me” Video
BC Law’s Kent Greenfield on Kavanaugh, Keeping Things FAIR