Marianne Faithfull’s Negative Capability is a sonic death trap. Many of the songs are sad and depressing—and although pondering life and death can lead to great lyrics for some artists, writing them at age 71 gives them a whole new spin. Maybe it’s all a reflection of the album’s extremely vague title, which hints that the album might not be the most positive.

The song on the record that best represents this is “Born to Live,” an overly-simple and repetitive number about life and death. The song touches on all sorts of depressing topics (including friends dying) in between a couple cliché lines like “blue are my enemy but love gets me through.” Sometimes, sad music is nice. It makes you feel something—maybe even makes you cry—but there’s a big difference between a good sad song and a bad sad song. “Born to Live” is of the variety that’ll make you cringe to yourself and then bum you out. Neither the lyrics nor her voice is poignant enough to transform the song from “sad” to “beautiful”—instead, it’s just a gloomy four minutes of your time.

The album’s opening song has a similar quality. “Misunderstanding” is absolutely doleful, and seems to go on forever without end. The lyrics don’t even make that much sense—they’re pretty repetitive throughout the song—but the slow, lagging beat overcomes any sense of positivity you might manage to find in the words.

Perhaps the most striking song on the album is a creepy one—one about murderers, Nazis, and war—called “They Come at Night. The song has a steady guitar beat, and Faithfull’s deep, raspy fits perfectly with its darker lyrics. “They Come at Night” is the total opposite of “The Gypsy Faerie Queen.” The song has a calm, simple feel to it and is accompanied by strange lyrics that are about imaginary things. As the song goes on, the music grows to sound more depressing (the song drags on for longer than it should), even though the lyrics aren’t sad at all. The pairing of these two songs emphasizes the divide between reality and the imaginary. In “They Come at Night,” Faithfull sings of war and death, which are very real, concrete things that people deal with. “Faerie Queen” allows her to express an alternate reality, one in which “[they] exist in the twilight in between.”

While the majority of the album does have this negative, sad, and slow quality, there are a few more upbeat selections (but only to a certain extent). “Witches Song” is a little more cheery sounding—with an emphasis on sounding because it includes lyrics like “Do you feel the panic, can you see the fear?” for an entire five minutes. The song is also an exemplary example of Faithfull’s monotonous voice, which is fairly unimpressive throughout.

One of the album’s standout songs is a cover of Bob Dylan’s “It’s All Over Now, Baby Blue.” She first released the cover in 1985, and re-recorded it over 30 years later to be the best song on Negative Capability. On “Baby Blue,” Faithfull’s voice is at its best, and the song isn’t depressing at all (it’s pretty uplifting, actually). Maybe the song is good because it’s one I already know and love, and I probably would feel the same way no matter who was singing it.

The lyrics featured throughout this album might have been good, poignant, powerful, or introspective. But what killed the album was its repetition and dreary pattern. Nearly every song sounds the same, and even if the lyrics to one particular song were of the most uplifting, glass-half-full variety, the listener probably wouldn’t even know it. It’s easy to get sucked into this slow pattern of simple piano with touches of violin, but a few minutes in the lifelessness of the music becomes overwhelming. Many songs were nearly impossible to finish, even if they were just four minutes long. While I applaud Faithfull for her introspection on the passage of time, and think it’s great she is still recording at 71, Negative Capability did not reflect her aging well. 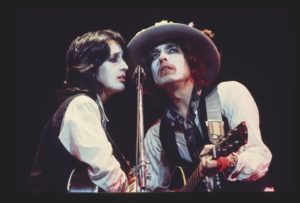