During the spring of their sophomore year, business students across the country find themselves facing important decisions about their futures as corporations send representatives to recruit students for internships, not for the coming summer, but for the following one. A few days ago, The Wall Street Journal reported that Goldman Sachs and JPMorgan Chase won’t participate in this practice, but will wait until the following semester—fall of junior year. Joseph Du Pont, Associate Vice President for Student Affairs and Career Services, stressed Boston College’s support for their decision and urges other companies to follow suit.

It is unclear whether other companies will continue to recruit business students during the spring of their sophomore year, at least for now. Furthermore, according to  Amy Donegan, assistant dean for Undergraduate Career Advising in Carroll School of Management, only the University of Pennsylvania is outwardly preventing this accelerated recruiting timeline by not allowing sophomore recruiting. If this system remains among other universities, and CSOM is to maintain its status as a competitive business school, BC has no choice but to allow spring recruiting. This becomes an issue for both students and businesses, however, when the preparedness of students to make these weighty decisions comes into question.

There are multiple schools of thought on this issue. Perhaps these companies have little incentive to abstain from early recruiting. From their perspective, students dedicated to entering financial careers are likely to be pursuing opportunities as early as possible—that’s the nature of competitive, financially rewarding career paths. Every year, banks need new analysts. The most talented students best fit for the job will more than likely already be outshining their peers.

Another school of thought argues that even these star students are unprepared. At that point in their academic careers, students haven’t learned all—if any—of the necessary technical skills to perform the jobs they are being recruited for. As the CSOM core curriculum is set up, most students would begin the recruiting process in the middle of taking Basic Finance. Not to mention, it raises a question of adequate career selection. Sophomores haven’t had enough time to take all of their core classes: How can these 19-year-olds be expected to know what they want to do for the rest of their lives? At that point, students aren’t focusing on knowing the skills necessary for the job—they’re primarily concentrating on how to be interviewed.

BC maintains a critical position on spring recruiting: The University knows that this is a bad system and that students and businesses alike would benefit from later recruitment. The University, however, also knows that to change the method would greatly disadvantage CSOM students. CSOM administrators are in a tough position, wanting only to accommodate their students. Ideally, companies and institutions could reach a compromise, coordinating parallel recruiting schedules so that opportunities remain equal, giving students sufficient time to prepare, ensuring that no students are disadvantaged by individual school policies. We applaud BC’s efforts to work with companies and other schools to restore some reason to the process, which every year consumes hundreds of BC students, including many outside of CSOM. Even to push recruiting back one semester to the fall of junior year—as Goldman Sachs and JPMorgan Chase have agreed to do—would allow students to gain more experience before potentially committing to a company for the first few years of their lives after graduation. 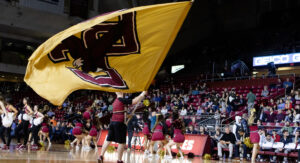