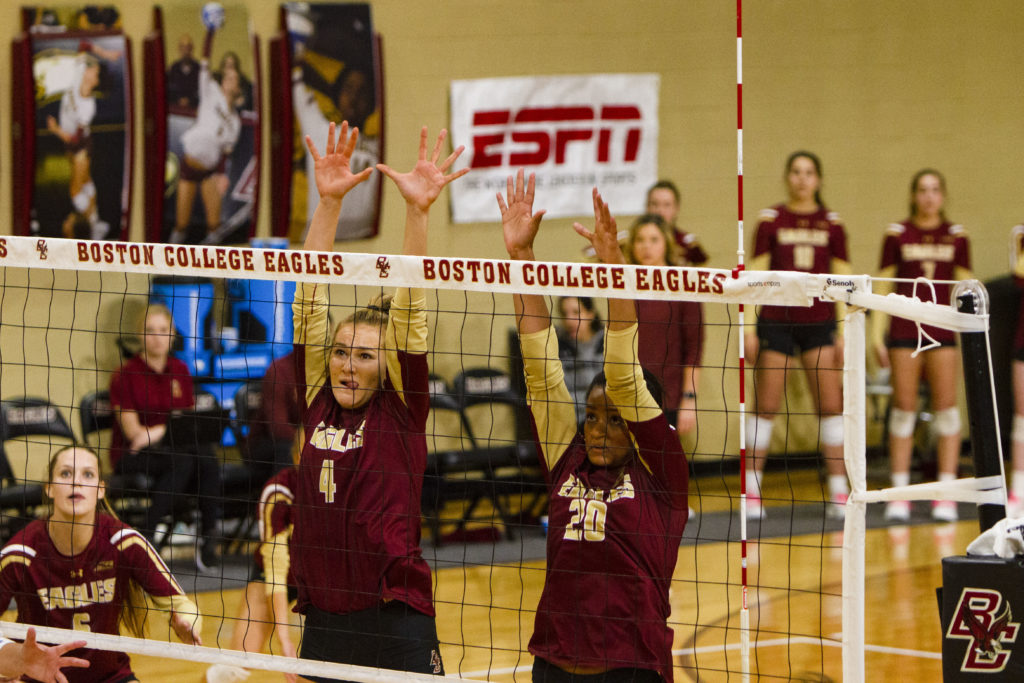 Near the end of the first set, Boston College volleyball trailed Virginia Tech, 22-20. The Eagles had just won five consecutive points and looked to be in a great position to steal the first frame. Instead, the Hokies quickly responded, taking the final three points of the set to claim the frame. Despite a courageous effort the rest of the match, BC fell short, failing to win a single set for the fourth time this season.

The first set was full of runs, as BC (13-13, 3-11 Atlantic Coast) jumped out to an early 9-7 lead, before VTech (14-12, 5-9) won five straight points. The Hokies eventually gained control, leading, 22-15. The Eagles mounted a strong comeback, winning five points in a row, in large part thanks to two more kills from Clare Naughton. Yet VTech collected itself and, ultimately, claimed the opening frame. The Hokies were led by sophomore standout Ester Talamazzi, who recorded four kills in the set, and four crucial digs from Carol Rafferty, who ranks seventh all-time in that department in VTech history.

The Hokies carried their momentum from the end of the first set, racing out to an 8-1 lead to start the second frame, sparked by six straight great serves from Kaity Smith. The sophomore was the best player on the court Sunday, adding to her team-leading 314 kills on the season by racking up 14 throughout the match. The Eagles responded valiantly, cutting the lead to three points, but couldn’t make up the large early deficit, dropping the second set, 25-18.

It was the same story in the final frame, as the Eagles fell behind, 14-4. Once again, BC did not bow out quietly, relying on an excellent performance from Naughton, whose eight kills led the Eagles. BC out-hit the Hokies 0.300 to 0.222 in the final set, but it didn’t make a difference. The Eagles drew within three points on three separate occasions, but couldn’t engineer one last run to tie the set. It was only fitting that on Senior Night, Hokies senior Jaila Tolbert clinched the match with her 12th kill of the day. VTech took the final frame, 25-21, sweeping the Eagles.

This loss marked the fourth-straight defeat for the Eagles, and the fourth time this season they have been swept. Sunday’s result also put an end to VTech’s own four-game winless streak. This will not be the last time the two squads face each other this season, as a return meeting is set for Nov. 16 in Chestnut Hill.

BC has just four games remaining in the regular season. After winning their first nine contests of the season, the Eagles have struggled against ACC competition. Although they have showed signs of progress under first year head coach Jason Kennedy, it’s evident that BC isn’t close to contending with the top of the conference. Sunday afternoon’s defeat to VTech—a team currently ranked 10th in the ACC standings—was just the latest example.