Representative Joseph P. Kennedy III, along with five other panelists, kicked off a housing case competition hosted by the Corcoran Center for Real Estate and Urban Action Monday evening.

The theme of this year’s Corcoran Case Competition is “The Future of Housing,” and it will focus on the Low Income Housing Tax Credit (LIHTC)—a tax credit that provides incentives for using private equity in the development of affordable housing. It provides over 50,000 units of housing for families earning less than 60 percent of what the median income is in their area, according to the Corcoran Center.

In the competition, which will take place on March 29 and 30, student teams will compete for a $5,000 prize by analyzing and presenting a solution for a LIHTC project to a board of judges, according to BC News. There will be two workshops held in the spring semester to prepare teams for the competition.

David Gasson, vice president and director of communications for Boston Capital, moderated the kickoff event, which featured a keynote speech from Kennedy titled “How to Fix Housing,” as well as a panel discussion with experts in the field of funding and building affordable housing.

Kennedy highlighted his hope of having the people who run the city of Boston actually live in it. This is a task that may seem unrealistic, according to Kennedy, since the price of living in the city far exceeds the income of Boston’s working class. Minimum wage workers have to work 83 hours a week just to afford a one-bedroom apartment, according to Gasson.

Kennedy emphasized the gravity of the issue behind rising prices in Boston’s real-estate market, mentioning an example of an employer who had 94 employees, out of whom only three owned a home. Low home ownership numbers among middle- or lower-class Boston workers are caused by various factors, such as high student loans, according to Kennedy.

The current structure of the American economy “puts a major burden on” younger generations, specifically people who are fresh out of college, the congressman said. Kennedy questioned how young residents can meet the lofty expectations of the Boston housing market while having such large debts to pay off.

Despite these obstacles young people face, Kennedy closed with a message of hope.

“We have the tools to address these [housing] issues,” he said.

The first panelist to speak following Kennedy’s talk was Karen Kelleher, executive director of the Local Initiative Support Corporation (LISC) and BC ’90. LISC works to provide communities with “capital, strategy, and know-how to become places where people can thrive,” according to its website. The company concentrates on investing in affordable housing, as well as a number of other initiatives it considers to be basic needs, such as health care and education.

Kelleher’s interest in housing issues began while she was volunteering in urban Boston during her time as a BC student. Her work not only affects those in need of affordable housing, but also small business owners, such as Teez Bakery, which, thanks to LISC’s initial financial support, recently received a large contract from Whole Foods Market. These types of businesses need capital to pursue their financial goals—which Kelleher is able to provide in her current role.

She defined affordable housing as “housing developed with government-subsidized programs” and cited the recent economic “explosion” as a reason it’s financially possible to support affordable housing initiatives in urban Boston communities that are badly in need of a different housing market.

Cynthia Lacasse, director of rental business development at MassHousing, spoke next, explaining how she navigated her quest to advocate for the expansion of affordable housing. MassHousing is a company that, in Lacasse’s words, “has a public mission with no state funding.” She highlighted the fact that although it’s a nonprofit, MassHousing has granted $1.2 billion dollars in loans in the last fiscal year alone and $13 billion in loans since its founding in 1966.

Bart Mitchell, CEO of The Community Builders, followed Lacasse with a lecture on how his company approaches constructing residential projects that can be used as affordable housing locations—which it currently does in 14 different states. Rodger Brown, president and CEO of Preservation of Affordable Housing, does similar work to Mitchell, building affordable housing projects and working to transform entire neighborhoods.

Both emphasized that their mission is bigger than just construction or finance: Its working to change the reality of financial and racial segregation that exists in the country. To fulfill that goal, Mitchell and Brown said they are taking on construction with the express purpose of “preserving affordable housing.” Brown presented a video explaining his company’s plans to transform Washington D.C.’s Barry Farm housing sector.

Featured Image by Jess Rivalis / For the Heights 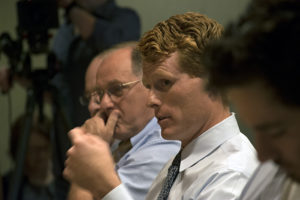