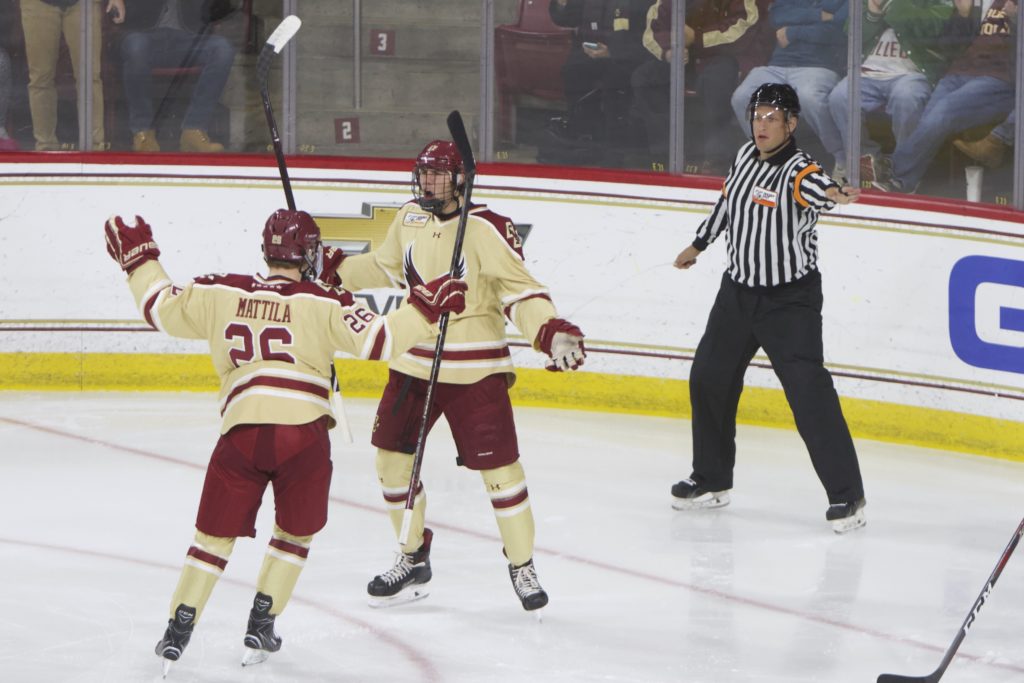 Cotton-Mattila-Hutsko Line Continues to Star in Win Over Vermont

Boston College men’s hockey head coach Jerry York settled on David Cotton, Julius Mattila, and Logan Hutsko for his top line three games ago against Merrimack, and it’s now more than safe to say he’s found a winning combination. The trio accounted for all three of the Eagles’ goals and all but one assist in Friday night’s 3-2 win over Vermont—BC’s third in a row since starting the year with five consecutive losses.

During the Eagles’ (3-5, 3-1 Hockey East) three-game win streak, Cotton, Mattila, and Hutsko have combined for 19 points—they’ve scored eight goals and chipped in 11 assists. The trio has paced a BC offense that has come alive as of late, scoring 11 times in the last three games after being held to one goal or less in four of the previous five games.

Cotton scored twice in the win, with his goals the first and last of the game. He found the back of the net just 16 seconds in, an opening salvo that took the Catamounts (3-5, 1-4) nearly the entire first period to respond to. Then, after the Eagles lost a streak of 16 consecutive penalty kills and conceded an equalizer to the Catamounts in the second period, Cotton received a pass from Hutsko with 21.6 seconds left on the clock and buried a one-timer past UVM’s Stefanos Lekkas for the eventual game-winner.

The goal was the eighth of the season for Cotton and fifth in the last three games, a remarkable stretch from the junior who is on pace to surpass his scoring output each of the last two seasons by the middle of November. Cotton, who scored 10 and nine goals in his first two years on campus, respectively, has flourished as the face of BC’s offense during its recent success—a fun development for the junior that has been nothing short of consistent since arriving.

“His skating his better, his strength is better, and his poise with the puck is better,” York said of the third-year winger. “He’s developing into a really, really high-level player for us. We’re going to ride him.”

A part of his recent surge, York said, has been the chemistry with Mattila and Hutsko. While lines were shuffled earlier in the year, Cotton found himself moving up and down the chart. After his three-goal, one-assist performance against Wisconsin alongside Christopher Brown and Jacob Tortora, York moved the trio to the top line. That development was followed by the line failing to record a point in a loss to Quinnipiac, so further changes followed—the core of Cotton and Brown were matched with Oliver Wahlstrom and Jack McBain to no avail. With five losses under its belt, BC and York made one more switch, and it paid off in three wins and a 19-point surge from its top trio.

“Julius and Logan help him,” York said, impressed by Cotton’s three-game span that has launched the Carolina Hurricanes prospect to 13th in the country in points per game. “That’s a pretty dynamic line for us now.”

The dynamic unit was on full display against the Catamounts, who played well but were dealt their fourth loss in five Hockey East games. Cotton’s early goal came after Mattila took a shot on Lekkas that took a fortunate deflection to the top of the crease. It was an easy finish, and in a familiar picture over the last three games, he was greeted with a quick hug from Mattila while Hutsko was the second of the team to arrive in the mob.

After holding UVM and Merrimack to just one goal in the prior two games and making 58 combined saves, Joseph Woll got the night off in goal for BC. His replacement, Ryan Edquist, played well throughout—but let a first-period equalizer that would set up a dramatic second period slip through his legs. Despite the best efforts of Michael Karow, the Catamounts’ Vlad Dzhioshvili was able to take a low, hard shot from the left side that Edquist couldn’t handle.

BC needed just three minutes into the second—a period that featured eight combined penalties—to retake the lead. Lekkas had absolutely zero chance to stop Mattila’s third goal in three games, as Michael Kim sent a centering pass to the crease where the junior was unguarded. Positioned at the back door, he fired a one-timer off the bottom of the bar and in, a shot that didn’t warrant much of a reaction from Lekkas.

The penalties, five of which were called on the Eagles, proved costly. After killing off the first one, Connor Moore was booked for roughing and McBain then went to the box for tripping, and the 10th-ranked penalty killing unit in the country came up short in the tough 5-on-3 situation. Jake Massie possessed the puck in the high slot and, after a brief delay, lifted a long-range shot on net that caught a screened Edquist off guard and beat him to the bottom right corner.

Nearly 11 minutes later, though, Cotton had an answer, and the Eagles protected the one-goal lead throughout the final 20-plus minutes. The victory wasn’t without worry, though. While tied at two, UVM had a pair of power plays, then Edquist was called upon for 10 of his 23 saves in the third. Still, it was a third win in a row, a full 180-degree turn after the 0-5 start to the year—a fact that York joked about.

“I thought even during that [streak] we were capable of being a good team,” he said. “I almost forget the losing streak now. We’re starting to come back. There’s still a lot of areas I feel we have to get better at.”

For now, the Eagles enter another Hockey East matchup against New Hampshire with a top line that stacks up with the nation’s best—at least over the last two weeks—and are gradually climbing back from the cellar they found themselves in. Sure, BC came away with three wins in four games against a pair of teams that went just 13-27-8 in the conference last year, finishing in the bottom three, but the Eagles had to start somewhere—and having a settled first line that can produce is a good place to begin.