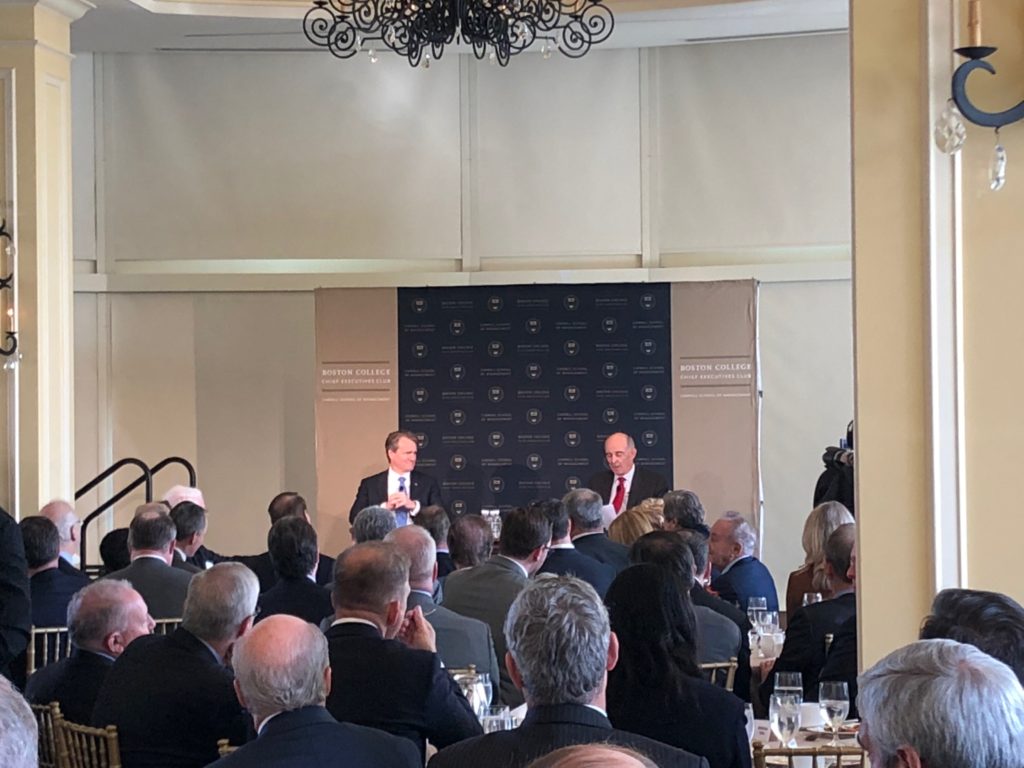 The Boston College Chief Executive Club’s luncheon in the Wharf Room of the Boston Harbor Hotel this past Thursday featured an interview between host Thomas J. May, chairman emeritus of Eversource Energy and featured speaker, Brian T. Moynihan, chairman and CEO of Bank of America.

The event began with announcements and introductions from Warren Zola, a BC professor, executive director of the BC Chief Executives Club, and CGSOM ’96. After Zola praised May for his commitment to the community and joked with the crowd about Moynihan’s affiliation with the University of Notre Dame—Moynihan’s alma mater—the men took the stage.

May and Moynihan began their discussion on the topic of responsible growth.

“We don’t grow as fast as some people on a given day and that’s fine,” Moynihan said.

He stressed the need to be customer-focused in a fragmented industry such as banking. Yet, Moynihan also addressed the topic of sustainability and the importance of sharing Bank of America’s successes with what he calls “the fourth constituency”: the greater community.

After covering complicated topics of recent international trade disputes, Brexit, and the world economy as a whole, the discussion turned to technology disruption, a trend that is consistently at the top of Moynihan’s mind. In response to advances in big data, machine learning, artificial intelligence, and robotics, Moynihan stated that financial services companies must stay innovative and adopt technologies that can be immediately scaled.

By way of example, Moynihan described the implementation of “Erica,” a personal financial digital assistant available to every Bank of America mobile app user.

“That didn’t exist a few months ago and now four million people are using the interface and that’s because the natural language processing has made it possible,” he said.

Besides satisfying customers, “Erica” also saves Bank of America call centers valuable time and money by quickly answering customer questions, such as “What’s my routing number?” and “What’s my balance?”

After being asked by Managing Director of the Boston Globe Linda Henry, Moynihan explained his approach to protecting the environment and preventing climate change. He said that the company’s job is to bring “money and financial thinking” to the table. He noted Bank of America’s $125 billion commitment to the environment that spans “everything under the sun.” Furthermore, Moynihan emphasized the bank’s commitment to using green bonds and other financial resources to bring energy to third world countries that need it to develop and be a part of the 21st-century world economy.

Update (11/12/18, 11:47 a.m.): This article has been updated to note that Henry asked Moynihan for his thoughts on Bank of America’s role in environmental protection. It originally said a Globe reporter asked the question.