Home » Famed French Composer Celebrated a Decade After His Death 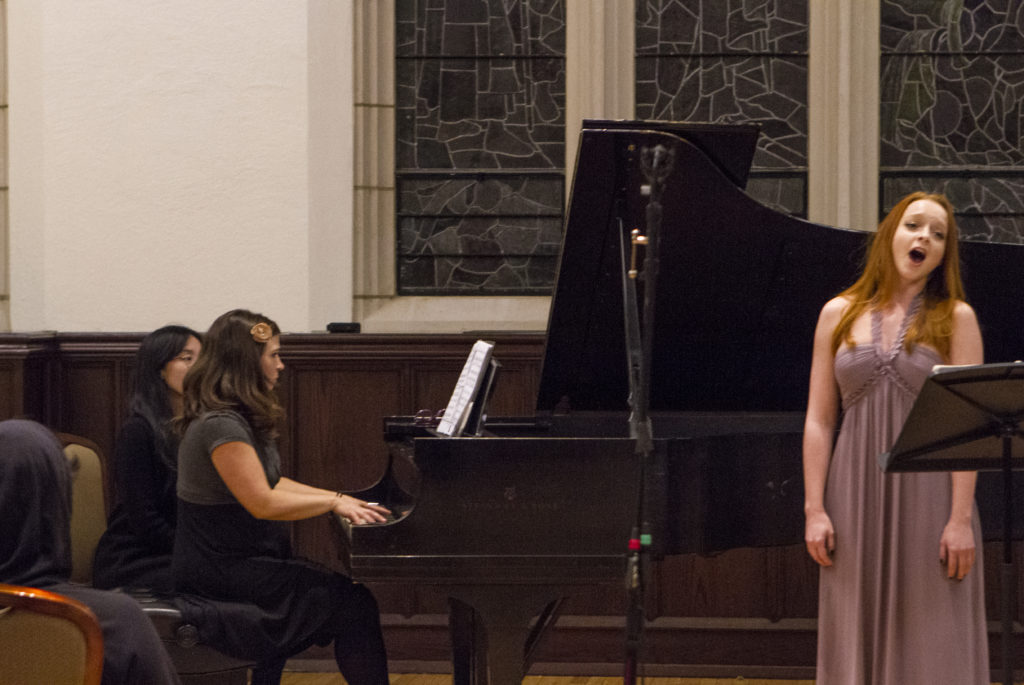 Famed French Composer Celebrated a Decade After His Death

On Tuesday night in a room inspired by Irish culture, five musicians paid their respects to a French composer who was heavily influenced by his own country. The Boston College music department organized this Hommage à Claude Debussy to celebrate the life of one the Romantic era’s greatest composers a century after his death. About an hour and a half long, the concert was casual and relaxed, with each performance either introduced by a rearrangement of instruments, chairs, and stands and brief a monologue, during which the performers provided a brief context for and analysis of their pieces.

Sandra Herbert, an assistant professor in BC’s music department, and Svetlana Krasnova bookended the performance with two piano duets. The first, Petite Suites, written in 1889, features four contrasting movements played by four hands on one piano. The first two movements, En Bateau and Cortège, were both inspired by poems: the former about sailing, the latter about a procession. The suite is a type of music called house music, Herbert explained, that was written at the time for advanced amateurs to play in a comfortable and informal setting. The inherent work’s intimacy shone through the relaxed atmosphere and was amplified by the general hum that could be heard in the audience, as students fidgeted, anticipating the performance of one of their professors. Already matching with their similarly short, layered haircuts and sparkly black tops, the pianists’ synchronized movements ensured steady articulation throughout and an even, clear ending.

The pair’s second piece, En Blanc et Noir, from 1915, closed the concert. Now playing on two pianos, the voices were indistinguishable, mingling with intricately woven harmonies. The title En Blanc et Noir (In Black and White) references not only the keys of the piano, but also the starkness of World War I, with each of the three movements bringing forth strong wartime sentiments, and Herbert and Krasnova expressing them clearly. The first movement launched straight into intense melodies with strong progressions like an assertive entrance into war, while the second’s somber, low tones delivered a looming sense of gravity, a threatening understanding of the inevitable aftermath of the long and gory battles. It resolves, however, with a strong final movement, conveying the sounds of battle and victory, urgency and tension through rushed scales and prolonged ornaments.

Herbert played two other works, a short selection of solo preludes written between 1910 and 1913 as well as a Sonata for Cello and Piano in D Minor from 1915, which she performed with cellist Junko Fujiwara, a faculty member in BC’s music department. While there is much value in group performances, solo pieces allow performers more artistic freedom through articulatory individuality. Herbert, having played the pieces in high school, displayed not only her familiarity with them but also her skillful technique as a pianist. Her dynamic control conveyed the melancholy of the first, Canope, whose ending resolved so eerily as she released the pedal with such control that no single moment when the sound stopped could be identified—the notes faded flawlessly. Herbert easily transitioned here into the beautiful and melodic tone of the second prelude, La Fille Aux Cheveux de Lin.

The sonata, being a later composition of Debussy’s, has a very unusual structure and sound. Intentionally cacophonic, the pizzicato and staccato that introduce the second movement establish a tense back and forth between the instruments, but distinctly clash with the abrupt transition from long, suspended lines and blips of legato in the first movement. The third movement maintained this general tension, culminating in a dramatic resolution of the unusually edgy cello sonata. Despite the complex harmonies and asymmetrical interactions between the voices, Fujiwara’s cues ensured that the instruments were constantly synchronized, and each of the three movements conveyed an adequate amount of dissonance.

Erin Matthews, soprano, and pianist Lindsay Albert, BC ’05,  performed a total of five pieces, all of which were written in the 1880s. Although they struggled to maintain a balance between voices in the beginning, the performers quickly overcame the room’s overwhelming capability for acoustic projection—the hard surfaces and unobstructed vastness magnify all sounds as the waves bounce off every surface. La Romance d’Ariel delivered dramatic whimsicality, with high pitches and light melodies, while Il Pleure Dans Mon Coeur conveyed a sense melancholic longing, with a repressed vocal line and a light accompaniment. Throughout, Matthews was extremely expressive—as the pitch and volume of her voice fluctuated, her eyes scanned the audience and her countenance evolved to convey the mood, often melancholy or tense. The pair’s final pieces were the final three from the collection, Quatre Chanson de Jeunesse (Four Songs of Youth). Each is inspired by a work of symbolist poetry, which, Matthews explained, generally emphasizes sound rather than meaning. They vary greatly, but each tone came through strongly.

The selection of pieces was representative of the entirety of Debussy’s compositional career, including various arrangements—piano duets and solos, vocal and piano arrangements, and a cello and piano sonata—that demonstrate his evolution as a composer in his 35 years of writing music. Early pieces show more traditional adherence to musical techniques, while later pieces, like the cello-piano sonata, display a loss of structure, a rejection of customary rules, through experimentation with unique synchronization between voices and unconventional sounds that instruments can produce. Regardless of the time of his life during which he composed, Debussy’s music entails such complex harmonies and rhythms, and these performers wonderfully tackled the very difficulties that make his work so beautiful and worth celebrating 100 years after his death. Although his life was short—he lived only 55 years—Debussy created works of music that have survived for nearly twice as long, and they’ll continue to do so for centuries to come.