Boston College Contemporary Theatre debuted its fall production, “A Night of New Plays,” on Thursday. Written by Daniel Quinones, MCAS ’19, the two one-act plays are tied together by their exploration of common themes: death and the search for purpose in a seemingly meaningless world. This is heavy stuff, but through deft characterization and the intimate scale of the stories, Quinones is able to put his unique spin on these age-old questions.

The first play, No One Asked Lazarus, begins with the din of traffic blaring through speakers overhead as the wisecracking owner of a newspaper stand (Jacob Cardona, MCAS ’22) gears up for the day. Known only as “the owner,” this mysterious character introduces the audience to the hero of the play, Lazarus (Alvaro Hernan, MCAS ’20). Quinones reimagines the biblical figure as a moody, disillusioned hitman who struggles to accept the nature of existence after being brought back to life.

From the instant he strolls onto the stage, it’s clear that something isn’t right with Lazarus. He’s dressed like a suave criminal, clad in a three-piece suit and leather gloves, but there are dark circles under his eyes, and he’s pale and gaunt. The audience soon learns that his next assignment is to assassinate the owner, but when Lazarus trains his gun on the friendly vendor, he’s not prepared for the torrent of words that the owner unleashes.

What follows is a high-stakes struggle, a battle of words between the two. Lazarus is wracked with despair and existential gloom, convinced that the world is empty and meaningless. The owner uses every argument he can to convince Lazarus otherwise. Quinones has written dialogue that is rich and winding, a mishmash of his own made-up myths, biblical references, and newspaper metaphors. Cardona delivers his lines with earnest, avuncular compassion, while Hernan counters him with weary apathy. It becomes evident that this is not just about getting Lazarus to put down the gun. It’s a battle for Lazarus’ very soul—a lot more is at stake than meets the eye.

The next one-act piece finds its hero facing a similarly difficult decision. In Tunnel’s End, Layla (Katherine Van Riper, MCAS ’21) finds herself in the titular tunnel and discovers that she has died. She must choose to either venture to the end of the tunnel to face her death or sell her soul to a demon (Raymond Norville, MCAS ’20) in exchange for immortality. The demon, who takes the form of Layla’s boyfriend, tempts her with the possibility of experiencing earthly pleasures forever.

As this force attempts to lead her astray, there are two other women intent on guiding her to the end of the tunnel, where she knows deep down she must go. The dynamic between Layla and these opposing forces drives the plot of Tunnel’s End. The lighting perfectly matches the tempo, drawing close and pinning two characters together at a tense moment, then suddenly widening out as the situation diffuses. The ambience of a tunnel is captured by Chinese lanterns suspended over the actors and the sound of a chilly wind blowing.

The characters of these plays grapple with the unfair, the unknown, and the unfathomable. Death and nihilism are in the air. Even so, there is a tangible sense of hope beyond all the angst, and the duality of life and death is embodied by the two heroes. As one embraces his return to life, another accepts her exit from it. 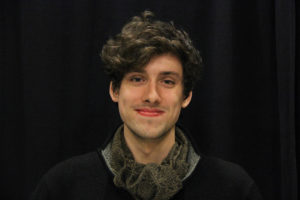