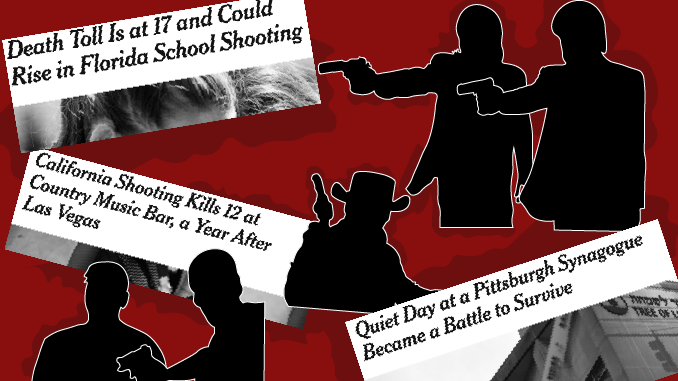 Curse words decorate the dialogue of the evening news. Powerful men get away with doing awful things. Women are wearing killer suits. The North and the South still fight wars. Samuel L. Jackson continues to exist. And there are guns everywhere—in restaurants, in places of worship, in bars—wreaking havoc on everyone in their range and leaving in their path an America soaked in blood. Reality is starting to feel a lot like a Quentin Tarantino film—really, all that’s missing is extravagant facial hair.

Firearms star on many of the lauded director’s movie posters—think Pulp Fiction, Django Unchained, The Hateful Eight, Inglourious Basterds, From Dusk Till Dawn, and True Romance—and get so much airtime they are deserving of an IMDB profile of their own. Tarantino is fixated on gun violence, firing off rounds to send the plots of his critically acclaimed films ricocheting in all directions. The result? Heart-pounding action scenes that captivate audiences and critics alike.

Tarantino times pulls of the trigger in the same way a choreographer times dance sequences to music: The director measures a bullet’s flight through the air with an unsettling virtuosity and grace, making an artist of the shooter. Like all forms of art, Tarantino’s carefully crafted scenes stand to manufacture emotional responses, and in this case even dangerous emotional responses.

Does art imitate life, or does life imitate art? The age old question looms over Tarantino’s films like a detective over the corpses that often remain by the time the credits start to roll. Given America’s current obsession with active shooter video games and gunslinging movies and television series, it’s hard to determine the precise nature of the relationship between the media’s obsession with guns and the persistence of gun violence. That’s not to say that anyone who watches a Tarantino film will suddenly stockpile ammo and go on a shooting rampage—mental health is an important part of this conversation, albeit a less significant part of Tarantino movies.

It is fitting that Tarantino takes up a violent romance with guns in flicks set around the time of the Civil War—the director’s 2012 Academy Award winning Django Unchained takes audiences back to a country just on the verge of the Civil War, and the 2015 film The Hateful Eight picks up with a new cast of characters not long after the fighting has ended. Tarantino’s time travels tell a story that, like most movies, embellishes the truth: Guns make pretty regular appearances in both films, but prior to the Civil War, guns were relatively uncommon in America and only became more popular with later technological advancements and decreasing prices. The silver screen portrayal of guns as a constant since America’s foundation gives off a false sense of tradition, an additive that only convolutes discussions about gun control.

Upon getting locked in a cabin with a blizzard roaring outside and a seven-man motley crew inside, The Hateful Eight’s imposing bounty hunter John “The Hangman” Ruth (Kurt Russell) begins to gather up the guns of the residents, resulting in a conversation with Joe Gage (Michael Madsen) that embodies America’s present-day parasitic relationship with gun ownership:

When the paranoid bounty hunter requests Gage hands over his gun, Gage replies, “I feel kind of naked without it,” to which Ruth retorts “I’ll protect you.”

Guns have become a symbol of self-sufficiency and power. In the American psyche, they conjure up images of fearless cowboys of the Wild West and strong soldiers of generations past and are steeped in emotional associations with independence and freedom.

Some proponents of gun rights supplement this emotional attachment with the logic that guns are a necessary form of protection, and they certainly act as such in many Tarantino films. Contrary to popular belief, this protectionist interpretation did not legally apply to individual citizens until the Supreme Court ruled that individuals have a right to own a gun for home protection in the 2008 District of Columbia v. Heller case, thus departing from the traditional “militia” interpretation of the Second Amendment. Relatively speaking, the ink that created a right to own a gun for individual self-defense is still wet, and smearing that ink in favor of more stringent restrictions would hardly undo centuries of history.

The gun control conversation following mass shootings can feel as routine as rinsing and repeating: Disaster strikes, we talk about it for a few days, and then we forget until we find our laws dripping blood once again. An understanding of the facts that form the foundation of U.S. gun laws can help dispel some of the arguments that are entrenched in movie myths and make way for meaningful debates that lead to change. The Borderline Bar and Grill shooting that took the lives of 12 people on Wednesday occurred just under 50 miles from the shooting location of the iconic stick-up scene that bookends Pulp Fiction—a distance far shorter than that between silver screen histories and reality when it comes to documenting gun ownership in America. 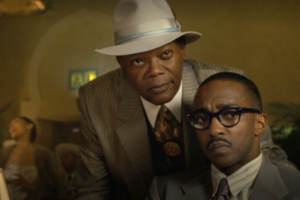 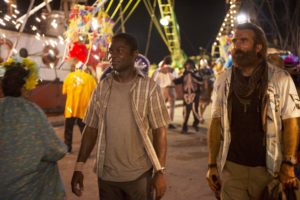