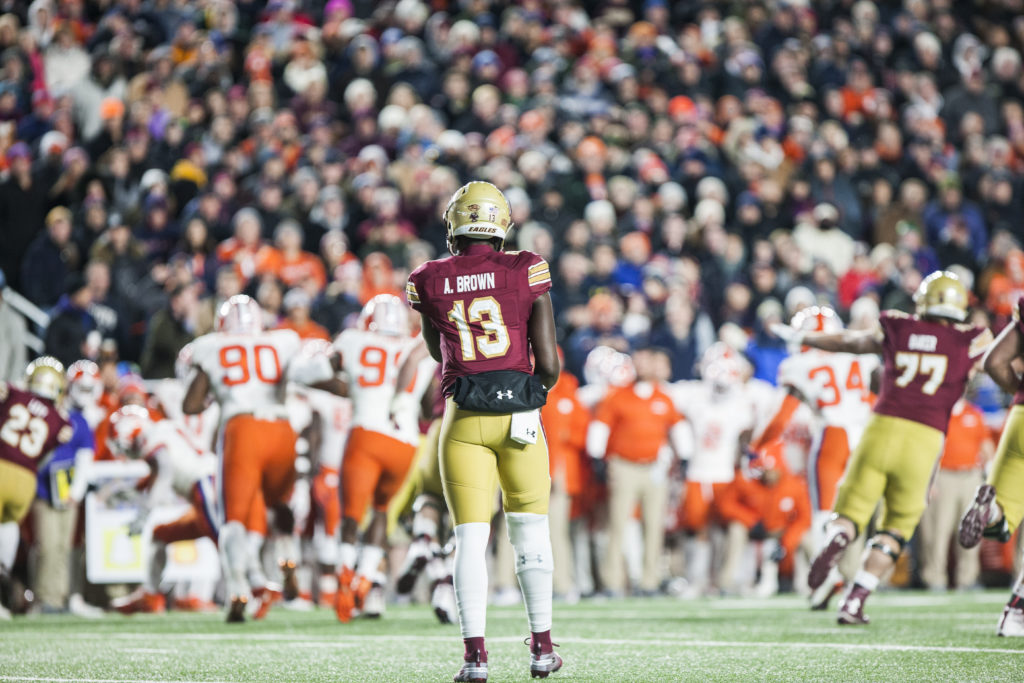 When Boston College football starting quarterback Anthony Brown took a vicious hit from Clemson defensive tackle Christian Wilkins on the Eagles’ first drive of Saturday night’s College GameDay-featured matchup, many feared that the redshirt sophomore had suffered another severe injury, perhaps one comparable to his season-ending ACL tear the year prior.

Things took a turn for the worse when Brown went to the locker room and was ruled out for the remainder of the game. Then, serious questions were raised when head coach Steve Addazio told reporters that the underclassman gunslinger had been hospitalized with an internal body injury.

But during Monday’s weekly press conference, a cautiously optimistic Addazio reassured the media and fans that Brown is going to be alright.

At the moment, there’s no telling whether he’ll take active practice reps this week or play this coming Saturday at Florida State. His best friend and tailback, A.J. Dillon, is in a similar boat. The sophomore running back limped off the field in the fourth quarter, once again tweaking his left ankle—an injury that he’s been battling since Week Five.

“A.J.’s [injury] is really honestly about the same as it’s been each week,” Addazio said. “I think he comes off the game, doesn’t feel great on Sundays and Mondays, and as the week goes on, we see improvement. … This is a very, very tough injury for a running back, and usually one that’s going to linger until you get an extended period of time where you can get beyond it.”

After sitting out two weeks earlier this season, Dillon has hardly looked himself in the backfield. Since the initial injury, the once-Heisman Trophy candidate has rushed the ball 72 times for 284 yards, logging 3.94 yards per carry—1.34 less than his career average. In his return, Dillon masked the pain with a 149-yard, one-touchdown performance against Miami. Each of the past two weeks, though, the sophomore has failed to eclipse the 100-yard mark and has had to leave the game early. His 16-carry, 39-yard outing versus Clemson is his worst as the Eagles’ starting running back.

Addazio and the training staff will monitor the status of both Brown and Dillon throughout the week. In the meantime, backup quarterback E.J. Perry, who was thrown into the line of fire against four future NFL defensive linemen on Saturday night, will get reps with the ones. While Perry showed flashes of athleticism and arm strength, the sophomore only completed 12 of his 21 passes and averaged just 4.7 yards per attempt. Addazio said that part of the signal caller’s struggles can be attributed to his lack of experience.

Prior to Saturday night, Perry had only recorded 18 pass attempts on the season, the bulk of which came against Massachusetts and Holy Cross. Last year, the underclassman’s redshirt was burned after taking a few snaps in BC’s Fenway Park blowout victory over Connecticut. Although he won the backup job in training camp, he really hasn’t had a ton of practice time with the starters in the past two months.

Unlike last year when Addazio was able to slide Darius Wade—the team’s opening day starter in 2015—into the lineup, the Eagles coach had to turn to an inexperienced quarterback on national television against the second-best team in the country. Addazio believes that, when prepared, Perry can be quite effective.

“I don’t know if you guys realize, E.J. is an exceptional athlete,” he said. “He has tremendous measurables. He’s very fast, very explosive—great change of direction. You’d be shocked by it, his measurables are elite, and he can throw it.”

Catering to Perry’s speed, Addazio and offensive coordinator Scot Loeffler opted to run a heavy dosage of the option against Clemson. The Andover High School product had varying levels of success on the ground, taking a beating in the process. Of course, because of the errant snap in the second quarter—and subsequent 32-yard loss—as well as three Tigers sacks, his rushing stats were skewed. But Clemson defensive coordinator Brent Venables’ unit adjusted to the play-calling change in a heartbeat, never letting Perry scramble for more than eight yards at a time.

Considering that FSU is only conceding 136.5 rushing yards per game this season—good for 38th in the nation—it’ll be interesting to see if the Eagles stick with the same offensive mindset. The Seminoles have quarterback issues of their own.

Deondre Francois started the first eight games of the 2018 campaign before suffering a concussion in the fourth quarter of FSU’s 59-10 defeat to Clemson. The following week, James Blackman tossed four touchdowns in a losing effort to North Carolina State. Francois got the nod at Notre Dame, but completed just 23 of his 47 pass attempts against the Irish, even throwing an interception on the second play of the game. Even so, head coach Willie Taggart ended the multi-week quarterback controversy today, saying that Francois will start the rest of the way.

Regardless, it’s safe to say that neither team is sitting pretty behind center.