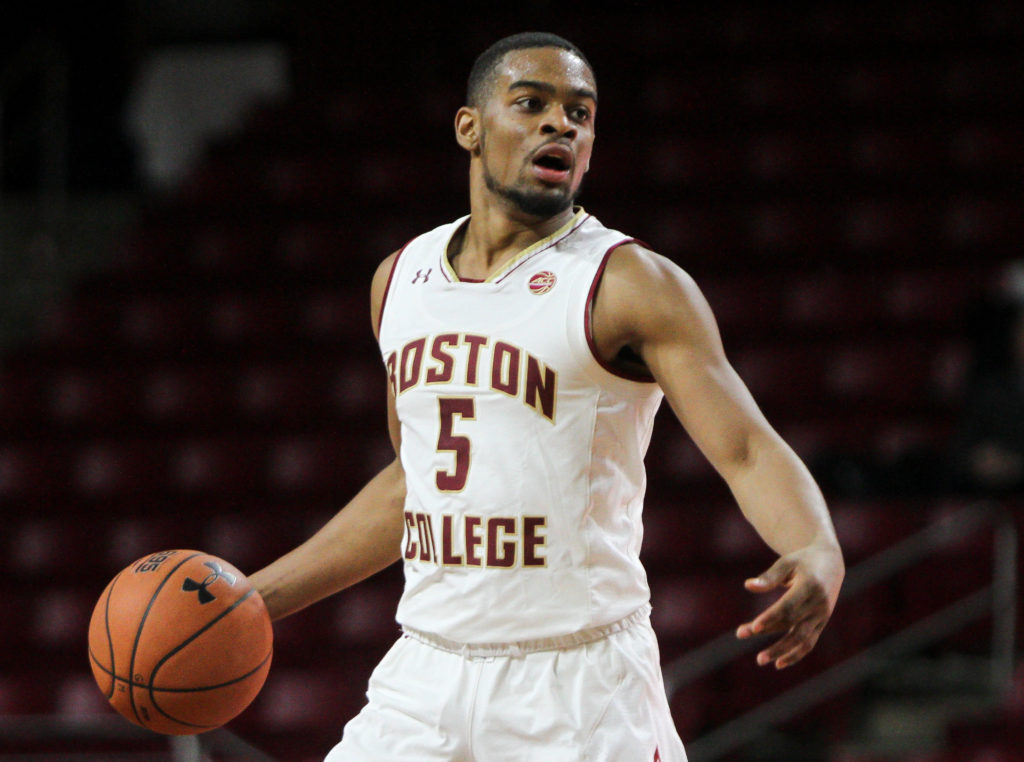 Despite entering halftime either trailing or tied with its non-conference opponents in each of the first two games of the 2018-19 season, Boston College men’s basketball escaped with a pair of victories. Head coach Jim Christian’s team wasn’t so fortunate on Wednesday night.

With about 30 seconds left in regulation, IUPUI (Indiana University – Purdue University Indianapolis) guard D.J. McCall dished the ball to Nick Rogers, who had attempted just one shot all game. The junior made the most of the opportunity. After catching the pass with two seconds left on the shot clock, Rogers launched a contested 3-pointer from the edge of the BC logo over the outstretched hand of Wynston Tabbs. Traveling in the air for what seemed like a few minutes, the ball dropped through the net with a swish, extending the Jaguars lead to six. Rogers’ dagger virtually put IUPUI’s 76-69 upset victory to bed—the program’s first win over a Power Five opponent in 16 years.

“We should have learned from the St. Francis [Brooklyn] game,” Christian told reporters following the game. “We didn’t. We talked a lot about it, we showed a lot of film on it. For some reason it’s not registering right now, so we’ve got to get to the bottom of it.”

Wednesday marks the Eagles’ first bad non-conference loss since 2016-17. There’s a lot to unpack in the six-point defeat, considering BC (2-1) came into the night as 16.5-point favorites.

Two years ago, Camron Justice transferred to IUPUI (2-1) from Vanderbilt, looking to get more playing time and reunite with high school teammate and classmate Evan Hall. Because of NCAA transfer rules, Justice had to sit out the 2017-18 campaign, meaning that this is the first season that he can run up and down the court with Hall since they were at Knott County Central. It almost looked as if they were back in high school—for the first time this season, both Hindman, Ky. natives reached double figures, combining for 47 of the Jaguars’ 76 points, including 26 of their final 40. Justice had the green light all night, and although he struggled mightily from beyond the arc, he had no trouble booking his ticket to the charity stripe. The junior finished 13-of-13 from the free throw line, making up for his 36.8 percent shooting.

One can make the argument that Jordan Chatman is BC’s deadliest 3-point shooter. Back in 2016-17, the BYU transfer tied the single-game program record with nine triples against Virginia Tech, finishing the night with 30 points. Last year, he knocked down five or more in five separate games, including the Eagles’ upset win over top-ranked Duke. On Wednesday night, Chatman—who started the season 2-of-8 from deep—channeled his mid-season form and connected on four 3-pointers, notably three in the first half. Along with Ky Bowman, Chatman fueled BC’s first-half offense. The two guards were responsible for 23 of the team’s first 27 points, trading self-made five-point runs in the process. Yet in the second half, BC’s transition offense came to a screeching halt, and so did Chatman’s production. The 25-year-old senior only attempted two shots in the back half of play, all but vanishing amid IUPUI’s gritty second-half performance—a disappearing act that’s all too familiar for Christian and Co.

So Much for the Four-Inch Height Difference

For all intents and purposes, Hall is the Jaguars’ center. At 6-foot-7, the lefty is remarkably small to occupy the five position. At first, it looked as if he might be overmatched in the paint by the 6-foot-11 Nik Popovic. Hall attacked the basket in the post four times in the opening six minutes of regulation, three of which ended with a Popovic stop. Eventually, though, the big man’s persistence paid off. Hall closed out the half with eight points on 4-of-8 shooting, but it was really what he did in the second period that turned heads. Over the course of the first 11 minutes of the second half, he racked up seven points and five rebounds, four of which came on the offensive end of the floor. As soon as Hall, who finished with 16 points and 10 rebounds—the sixth double-double of his career—found his footing in the early part of the first half, he got the better of Popovic, Luka Kraljevic, and Steffon Mitchell inside.

“It’s not difficult if you hit him, block out, and do the things that we teach—but we didn’t do that,” Christian said.

Just four days earlier, Eastern Illinois held Hall to a mere six points and two rebounds. Against BC, though, the senior played his heart out, teaming up with Justice to pull off a signature upset.

A Game to Forget For Popovic

Popovic couldn’t have gotten off to a much better start—defensively, that is. The junior shut down Hall in the post three times in the first six minutes of regulation, asserting his dominance in the paint. That said, he didn’t have nearly the same success on the other side of the floor. In fact, Popovic was just 1-of-5 from the field. He managed to get to the charity stripe, but the four trips were all for naught. Popovic shot a meager 2-of-8 from the line, at one point airballing one of his free-throw attempts.

Christian suggested that the Bosnia and Herzegovina native was probably hampered by a nagging shoulder injury that he’s been battling recently, as evidenced by the tape that straddles the center’s left shoulder. His poor free throw shooting was particularly staggering because he connected on 71.3 percent of his attempts last season and didn’t have a game where he missed more than three shots from the stripe all year long. As the game progressed, Popovic’s confidence dipped, and the center resorted to fouling his man inside, namely Hall. The junior picked up three fouls in the second half, fouling out with more than four minutes remaining in regulation, marking the first time he’s picked up five personals in a game since Jan. 15, 2018.

Learning From the Best

Although volatile at times, Bowman is undeniably one of the most talented guards in the country. After dropping a game-high 26 points in BC’s win over St. Francis this past weekend, the NBA prospect stormed out of the gates on Wednesday, scoring 10 first-half points on 4-of-6 shooting. Perhaps due to his four turnovers in the opening period, Bowman was slightly more conservative in the second half. That’s when his new backcourt partner, Wynston Tabbs, took over. Even though the freshman guard only converted one field-goal attempt in the period, he made sure he hit the 15-point mark for the third-consecutive game, getting to the line a handful of times. When all was said and done, Tabbs finished 8-of-9 from the line, even drawing contact in the final minute of regulation during the Eagles’ last-ditch comeback effort. But Tabbs had been showcasing athleticism reminiscent of Bowman throughout the entire game.

Up 28-16 with eight minutes left in the first half, Tabbs tracked down Justice on the break for a highlight-reel block, leaping just past the ACC logo to swat the guard’s layup attempt against the glass.

Flash forward to the second period, and BC was leading, 44-40. Following an IUPUI turnover, Chatman fired a pass down the court for Tabbs, who—like a wide receiver—snatched the ball over his shoulder and promptly scooted by Grant Weatherford, en route to the hoop. On his way up to the rim, the freshman switched hands and kissed a layup off the backboard, all while being fouled. Tabbs then completed the old-fashioned 3-point play at the line.

Soon after, Tabbs executed the pick-and-roll to near perfection. Once he brought the ball up the court, he drifted toward the top of the arc, and Kraljevic set a screen on Hall. The IUPUI center switched onto Tabbs, leaving Kraljevic wide open inside. Tabbs took note and whipped a pass toward the paint for his big man, who finished at the rack with a two-handed jam.