Home » Lonergan Sparks BC to Bounce-Back Win Over Connecticut 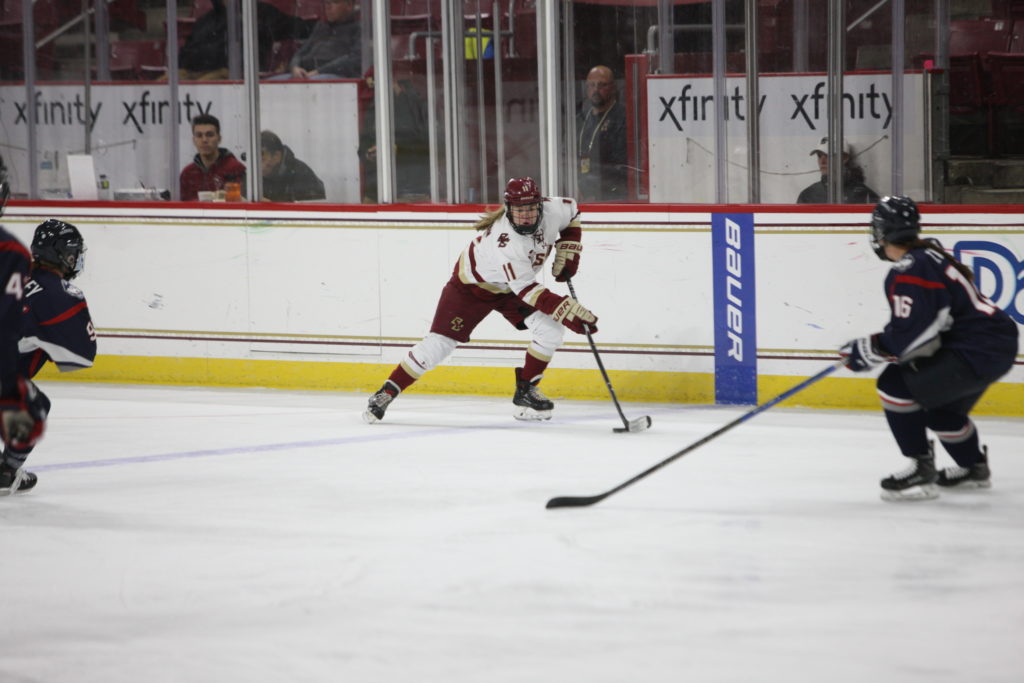 Lonergan Sparks BC to Bounce-Back Win Over Connecticut

With about five minutes left in the first period, Boston College women’s hockey was still looking to break free from a scoreless battle against scrappy Hockey East foe Connecticut. As the Eagles continued to mount pressure, it seemed like a goal was inevitable, and eventually the host Huskies cracked, with Caitrin Lonergan burying a clever wrist shot. The Eagles never relinquished that lead and pulled away from the team that knocked them out of the Hockey East semifinals a season ago, coasting to a comfortable 3-0 victory on the road—the same 3-0 scoreline that BC managed against UConn two weeks ago.

From the opening puck drop, No. 4 BC (9-3, 6-1 Hockey East) took control of the game, overpowering a team several rungs below them in the conference standings. Junior forward Lindsay Agnew was especially active, firing off three shots in the first eight minutes of the contest. The Eagles continued to challenge Huskies (6-6-1, 3-5-1) netminder Morgan Fisher, but she stood strong. It wasn’t until five minutes before the conclusion of the first period that BC finally broke the deadlock, with Lonergan picking up her fifth goal of the season on a wrist shot that snuck by Fisher. Just two minutes later, BC nearly doubled the lead, but Cayla Barnes struck the pipe.

Despite BC’s dominance of the first 20 minutes, UConn did manage a few great chances of its own. Star junior Catherine Crawley was denied by BC goaltender Maddy McArthur on a breakaway. The Huskies hit the post as well, due to a powerful shot from Briana Colangelo. Regardless, Fisher did a great job of keeping UConn in the game, considering the home team only registered four shots on goal in the period, just a third as many as BC’s 12 efforts on target.

The second period greatly resembled the first. Once again, the Eagles controlled the majority of the play. They fired 15 shots on goal, more than twice as many as the Huskies could muster. Unfortunately for BC, it failed to find the back of the net, with Fisher turning away each shot that came her way. The best chance came with about five minutes left in the period, when Lonergan set up freshman Olivia Finocchario in front of the net, but she was unable to convert. In the dying seconds of the period, Lonergan and Megan Keller nearly jammed in a goal for the Eagles, but were denied by Fisher once again—the junior nearly single-handedly kept her team in the game.

Similar to the first frame, UConn had two good chances come about halfway through the period. Yet, McArthur was able to make two clutch saves on firm shots ripped from the point, preventing her team’s early domination from going to waste.

The third period began evenly, as the teams traded decent scoring chances. It appeared that the Huskies would have a great opportunity to level the score after going on the power play with 12 minutes left in the contest. After all, UConn boasts the most efficient power play in Hockey East by a healthy margin. Yet, despite ranking in the bottom half of the conference’s penalty kill, the Eagles held off the Huskies, and seconds later, Makenna Newkirk found the back of the net off a great pass from Barnes. About five minutes after that, BC added to its total through Finocchario, who finished off a chance created by Lonergan to score her first career goal.

In the end, it was a thorough win for the Eagles, even more impressive considering the Huskies are firmly in the middle of the conference. They more than doubled UConn’s shot total, en route to an impressive road victory against a solid opponent. BC showed its offensive versatility as well, with three different skaters scoring. Further, McArthur earned her third shutout of the season, and while it was not the busiest game for the freshman netminder, she still made a few vital saves when the Eagles were only up a goal. It was no small feat to keep the Huskies scoreless, as they own the third most potent offense in the conference.

It was a strong bounce-back performance from BC, after its eight-game win streak was snapped last time out against Providence. Moreover, it was another game that displayed the Eagles’ depth up and down the roster. At full strength, it is clear that BC is not only one of the best teams in Hockey East, but one of the best teams in the nation. Aside from the hiccup against the Friars—a game in which four key Eagles were missing—BC is clicking right now and showing no signs of slowing down soon.