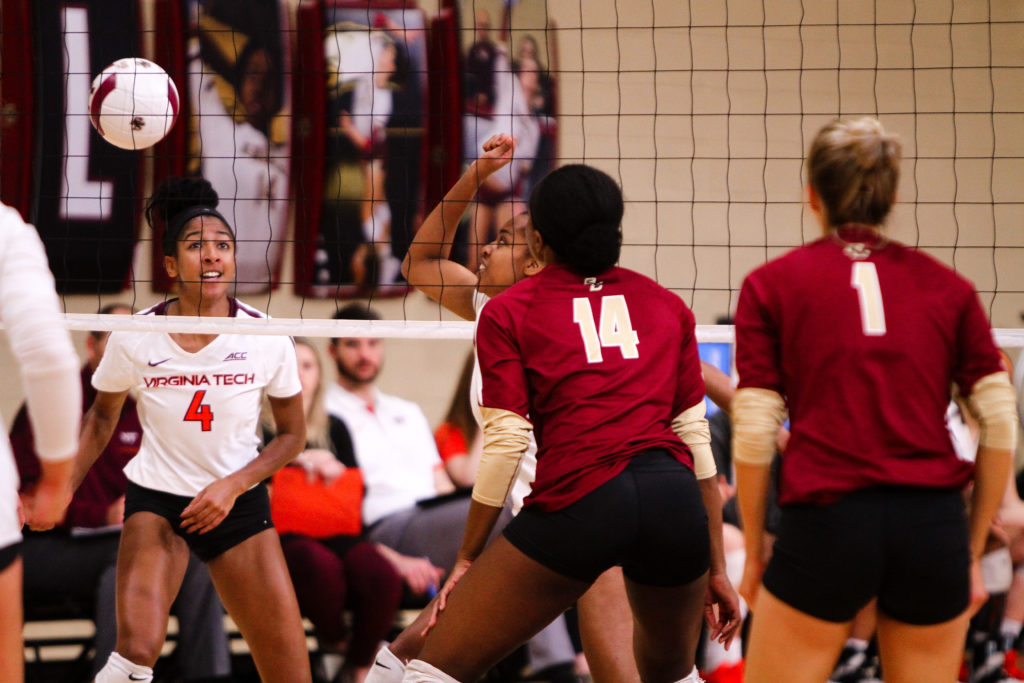 Positive moments for Boston College volleyball have been hard to come by lately. After a 9-0 start to the season, the Eagles had lost 12 of their last 13 games coming into a senior night matchup with Virginia Tech. And when the Hokies roared back to tie the match at sets at two apiece after BC had grabbed an early 2-0 lead, it looked like senior night might just be another lost opportunity for a morale-boosting win.

But the Eagles’ seniors, led by McKenna Goss and her 19 kills, ensured that the night celebrating their contributions to the program ended the right way. After facing match point trailing 14-13 in the deciding fifth frame, BC won three points in a row to snatch a dramatic win, one that avenged a loss to the Hokies the week prior.

In the first set, neither team was able to gain much separation. Goss gave BC (14-14, 4-12 Atlantic Coast) an instant lead, notching a kill on the first point of the game, but VTech (14-15, 5-12) won the next two points, setting the stage for a closely contested frame in which the lead changed hands 10 times—a befitting start to a back-and-forth affair. After an attack error from Rhegan Mitchell knotted the set at 2-2, the teams traded the next 32 points, with neither team able to grab more than a one-point lead. Clare Naughton and Cat Balido chipped in with two kills apiece for the Eagles, while Jaila Tolbert kept the Hokies in it with six kills of her own.

After a kill from Kaity Smith tied the frame at 18, BC was finally able to create some separation, grabbing a 21-19 lead after an error from Tolbert, and extending the lead to 24-20 after Balido and Amaka Chukwujekwu made a nice play to block an attempted spike from Tolbert. Ester Talamazzi briefly gave the Hokies a lifeline with a kill, but Chukwujekwu responded with a kill on the next point as the Eagles took the first set 25-21.

The second frame wasn’t nearly as close. After a set in which neither team led by more than four points, BC jumped on VTech in the second, rattling off 11 points in a row to start the frame. Goss punctuated the run with her fourth kill of the set, and from there the Eagles were firmly in control. The Hokies never got closer than that 11-point margin the rest of the way, as BC opened a lead as big as 15 points and cruised to a second-set victory, notching a 25-12 win after an error from Tessa Wyner.

Much like the first, the third frame was hotly contested from the beginning. The teams split the first 16 points, and yet another kill from Goss tied the match at 8-8. VTech was able to create some separation, winning three consecutive points and forcing a BC timeout, but the Eagles immediately responded. They went on a 5-0 run of their own, taking the lead at 13-11 and setting the stage for a dramatic conclusion to the set. VTech looked to have the set won after taking a 24-21 lead, but the Eagles saved three set points in a row—much like they would do in the final set of the match—and tied the set at 24. BC was able to save one more match point after the Hokies took a 26-25 lead, but couldn’t save a fifth, as a ball-handling error from Jane DeJarld gave VTech a 28-26 set win and kept the Hokies alive.

The fourth frame was just as close. VTech gained an early 6-2 lead after a kill from Talamazzi, but BC once again mounted a run of its own, and tied the set at 6-6 after a bad set from Mitchell. The teams continued to go back-and-forth. BC momentarily seized an 19-17 edge thanks to consecutive kills from Goss and Sophie West, but the Hokies responded by winning seven of the next 10 points to give themselves two set-points. Much like the last set, the Eagles wouldn’t give in, saving both to send the set into extra points, but weren’t able to fully get over the hump. VTech won the next two points, and a kill from Talamazzi gave the Hokies a 26-24 set win and sent the game to a winner-takes-all fifth set.

An extremely close match warrants a tense conclusion, and the fifth set didn’t disappoint. VTech twice seized a three-point lead, first at 6-3, then at 12-9, but both times the Eagles wouldn’t let them pull away, winning the next three points to tie the match. After a kill from Smith gave BC a 13-12 lead, Goss pulled BC even yet again with her final kill of the match, and the Eagles won three of the next four points to finally put the Hokies away, grabbing the intense last set, 16-14.

After VTech beat the Eagles in straight sets just two weeks ago, a win on senior night over that same Hokies team has to rank among BC’s most impressive performances of the season. The victory gives the Eagles 14 wins, their most since 2007, and also matches their conference win total of four from last season. Even though the ACC schedule has brought its fair share of struggles for BC—notably five consecutive losses entering Friday—notching the most wins for the program in a decade is no feat to scoff at, and can be looked at as proof that the Eagles’ rebuild under Jason Kennedy is well and truly underway.