Home » A Meditation on Thanksgiving and Massachusetts Puritanism 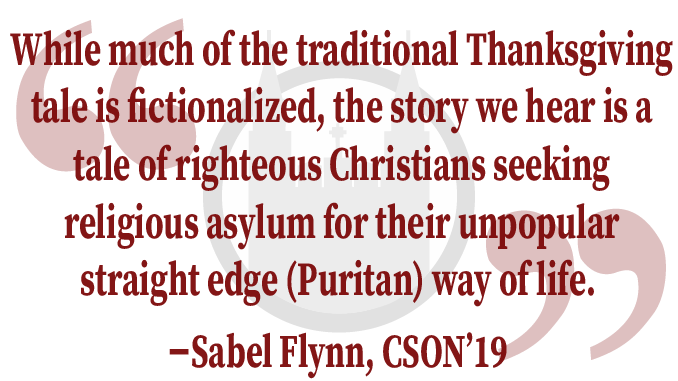 A Meditation on Thanksgiving and Massachusetts Puritanism

I really can’t stand the taste of turkey. That bird tastes like paper, and no amount of gravy can save it. The food associated with Thanksgiving makes me picture the fabled friendly colonizers taking complete guesses as to how to work the foreign land to prepare food. They likely had never seen a turkey before. Or potatoes. Historians say they ate fowl (basically turkey), deer, and corn—the Wampanoag people inhabiting the land allegedly helped the gracious guests.

If you’re from Massachusetts, by the way, you live on stolen land that was and is inhabited by several indigenous tribes. These tribes and groups include the Massachusett, Mashpee, Mahican, Nauset, Nipmuc, Pennacook, Pocomtuc, and Wampanoag peoples. Colonization of Massachusetts, as many people are already aware, was not the peaceful, mutually beneficial fantasy celebrated with holiday-themed depictions of Wampanoag people and pilgrims embracing.

In reality, the religious “refugees” did not randomly stumble upon the native population. The Manataka American Indian Council writes that “their belief system taught them that any land that was ‘unimproved’ was ‘wild’ and theirs for the taking, that the people who lived there were roving heathens with no right to the land.” Puritans came to Plymouth to establish the “Holy Kingdom,” fully aware of the existing indigenous population and fully intending to displace them.

The Wampanoag, too, were and are a very real and important part of Massachusetts history. Four hundred years ago, the Wampanoag people lived across present-day Martha’s Vineyard and Gay Head Massachusetts. They had a rich economy based on fishing and agriculture. War and disease brought by the colonists devastated the local populations and killed many.

While much of the traditional Thanksgiving tale is fictionalized, the story we hear is a tale of righteous Christians seeking religious asylum for their unpopular straight edge (Puritan) way of life. They bravely brutalized and colonized the already inhabited space and haphazardly applied a capitalist concept of property ownership to a land that previously belonged only to the sacred earth. We revere the bravery of these Puritans at the expense of the Wampanoag and other indigenous peoples. Every time we tell the story of the heroic journey to the “New World,” we contribute to the erasure and silencing of indigenous life and sovereignty.

Puritanism, by the way, continues to be a cancer to Massachusetts, decades after prohibition, and centuries after the Witch Trials. Our sex laws are extremely oppressive, and many people still fear the idea of the heathen “witch.” The cultural legacy of Puritanism enforces shame onto sinful behavior and promotes beliefs about humans as inherently wicked. In my opinion, it’s part of the reason why Massachusetts is obsessed with virtue signaling. But this is just my personal beef. Historically, the traditional Puritans were responsible for some of the most horrific parts of our state history, including genocide against natives and witch executions.

So, while I’m grateful to get a break from school to see my family, I am aware of the implications of the holiday. To many, however, Thanksgiving does not reference the pilgrims’ feast—it exists as a family holiday for gratitude. In Plymouth, the day is observed by many as the National Day of Mourning. The United American Indians of New England describe the meaning of the political action stating, “We are mourning our ancestors and the genocide of our peoples and the theft of our lands.”

My friend Leo went to the National Day of Mourning last year for its 48th anniversary. They were struck by the powerful political convictions when one speaker said, “We must go beyond decolonization and re-indigenize our world.” Decolonization is the freeing of a nation from dependence on and oppression from another. At the National Day of Mourning political demonstration, the Wampanoag and greater native American nation remember their friends, family, and loved ones who have lost their lives to genocide on the path to decolonization. The Unsettling America project writes, “We were all indigenous to somewhere, someone, and somehow…and can become so again. The old ways are gone, but I am still going home, not necessarily where I started, but maybe somewhere I began.”

American settler ideology is fundamentally dependent on land ownership. And property and land ownership are in direct conflict with the project of re-indigenizing our world. To accomplish this goal, abolition of land ownership is essential, but until that happens, recognition of indigenous sovereignty should be remembered this Thanksgiving. The United States needs to be held accountable for its imperialist projects—including the one that got us here—and therefore owes reparations to the indigenous population.