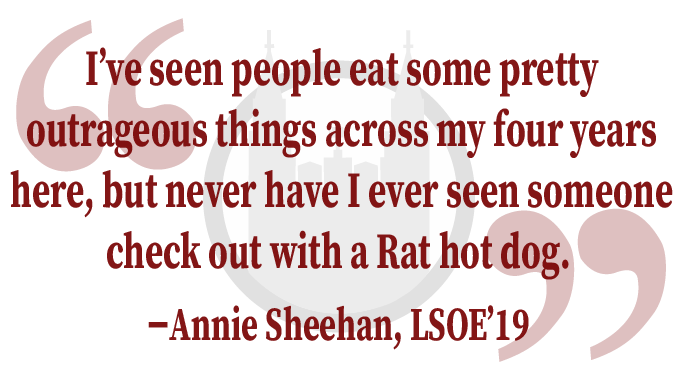 Sure, we’re the big dogs on campus, but we seniors talk a pretty big game about how knowledgeable we are in terms of Boston College. We’re orientation leaders, RAs, TAs, and tour guides, but there are always a few things left in the unknown that we’re just still unsure about:

I lived on Upper Campus freshman year, and junior year I usually walked from my off-campus house, so my experience with the bus is minimal. I have literally no idea when the buses are direct and when they are not, and I have yet to download the TransLoc app.

While we’re on the subject of buses, a senior (who will remain anonymous) accidentally got on the Newton bus a month ago—seniors: We’re just like you.

Don’t be fooled when you see a lost, wandering student peering at Mod numbers and assume it’s a freshman. Though many of us are actual residents of the modular apartments, we still have no idea how to figure out where 37A is, and why it isn’t near 36.

“Despite having lived in a Mod for nearly a whole semester, and although I have a general idea of where each Mod is, I still don’t have the number system down,” said Kevin Murray, a lucky resident of the Mods.

It’s okay, Kevin, you’re not alone. We’ll check in with you next semester.

4. “That other song” the band plays after all home games:

Honestly, does anybody know what this is? Kate Paterson, MCAS ’19, weighs in: “I have literally no idea what that is.”

For those of you who have heard this so-called “fight song,” it sounds so sad, so forlorn, that we should only play it when we lose. It kills the vibe of a win. Though has anybody ever actually stayed at a game long enough to hear this whole thing live?

5. What actually is Agape Latte?:

“It’s like a soulful thing,” my roommate tells me. “Motivational speakers and stuff.”

I personally have never attended an event myself (I’ll get there, I promise), but I am friends with Agapeccino Bean on Facebook, so I figure that counts for something. As an aside, is this related to Espresso Your Faith Week? Lattes and espresso? Seems like a connection.

The “C” buildings (Carney, Cushing, Campion) remain a mystery to most students. While Lynch students flock to the Educational Resource Center, a library full of elementary-level books and other fun gizmos located in the basement of Campion Hall, my roommates give me blank stares when I tell them that is my primary place of study. CSOM kids don’t make it that far south (“Where even is Campion again?” asks CSOM senior Jagpal Singh), and the MCASers who find themselves over on that side of campus see Campion as nothing more than the friendly neighbor to Merkert, home to many a lab and science classes.

Those things are roasting at a ripe 10 a.m. every morning, Monday through Friday, all year round. I’ve seen people eat some pretty outrageous things across my four years here, but never have I ever seen someone check out with a Rat hot dog. Do these things turn a profit? Or are they there only to nauseate those of us in the iced coffee lines?

**Update: Witnessed someone with a hot dog as I wrote this column. Point redacted.**