Home » BC Theatre Goes All Out for ‘Pride and Prejudice’ 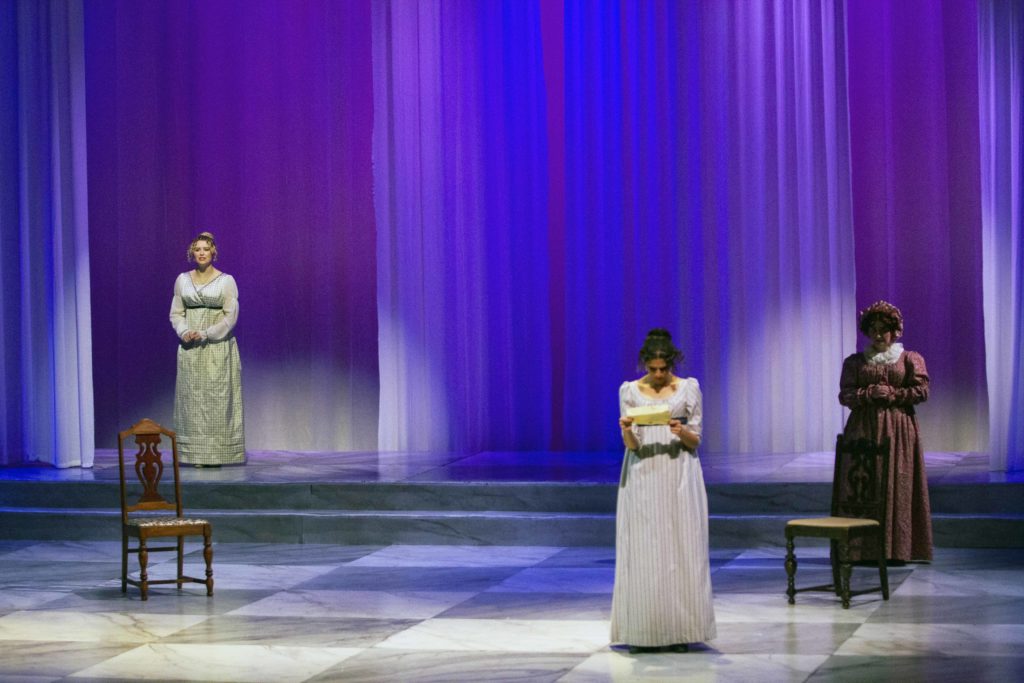 BC Theatre Goes All Out for ‘Pride and Prejudice’

Jane Austen’s Pride and Prejudice is one of English literature’s most famous novels, doubling as both a love story and a critique of women’s place in society in 18th-century England. It tells, of course, the story of Elizabeth Bennet—a woman who’s expected to follow the social norm and marry quickly—and her contentious love affair with a Fitzwilliam Darcy, a wealthy man who is both mysterious and proud.

This weekend the Boston College theatre department performed its rendition of the famous Jon Jory play Pride and Prejudice adapted from the Austen novel. The theatre department’s delivery of the text is extravagant and full of wit, breathing new life into the work, even for those who have encountered the story before.

The play’s set was stunning and provided the perfect backdrop for the venture into the luxurious world of Bennet: An awning decorated with a flower embroidery above the stage and elegant chandeliers hanging from the rafters. The actors stood on a bare marble floor. The lack of props didn’t hinder plot progression, however, and director John Houchin did an excellent job making the few chairs that were present on stage work for the play.

The beauty in the production of this play goes beyond the set design and into the costumes as well. The women donned brightly colored dresses and the men decked themselves in beautifully detailed overcoats. One audience member even let out an audible “wow” when the character of Lady Catherine De Bourgh (Marybeth Dull, LSOE ’19) took the stage in an enormous red and gold dress featuring a headdress and cane. Numerous actors play more than one role in the play and switch costumes between scenes, making costumes an important indicator of character.

Pride and Prejudice’s greatest strength can be found in its incredibly deep and fascinating cast of characters, and exceptional acting is a hallmark of this performance. While the play was well acted across the board, the standout performer was Jeremy Harris, MCAS ’21, in the role of Mr.Darcy, one of the most intriguing characters in English literature. Harris did the character more than justice in his performance.

Mr. Darcy appears stern and brooding, but on the inside is a truly good person. Harris commands attention whenever he is on the stage, and even when he is away from the action his heavy presence still looms over the scene. Harris also demonstrated excellent chemistry with his co-star Jessie Shaw, MCAS ’19, who shined in the role of Elizabeth Bennet.

Credit must also be given to Aidan Mallon, MCAS ’22, who plays the roles of Sir Lucas, Mr. Collins, and Mr. Gardiner. Mallon’s cast of characters provided much of the comic relief of the play and did so with impeccable timing. Pride and Prejudice proved to be picturesque, remarkably well acted, and another successful showing for the BC theatre department.

pride and prejudice
Himes: This One’s For the Girls
Observatory on Public Health Begins First Project