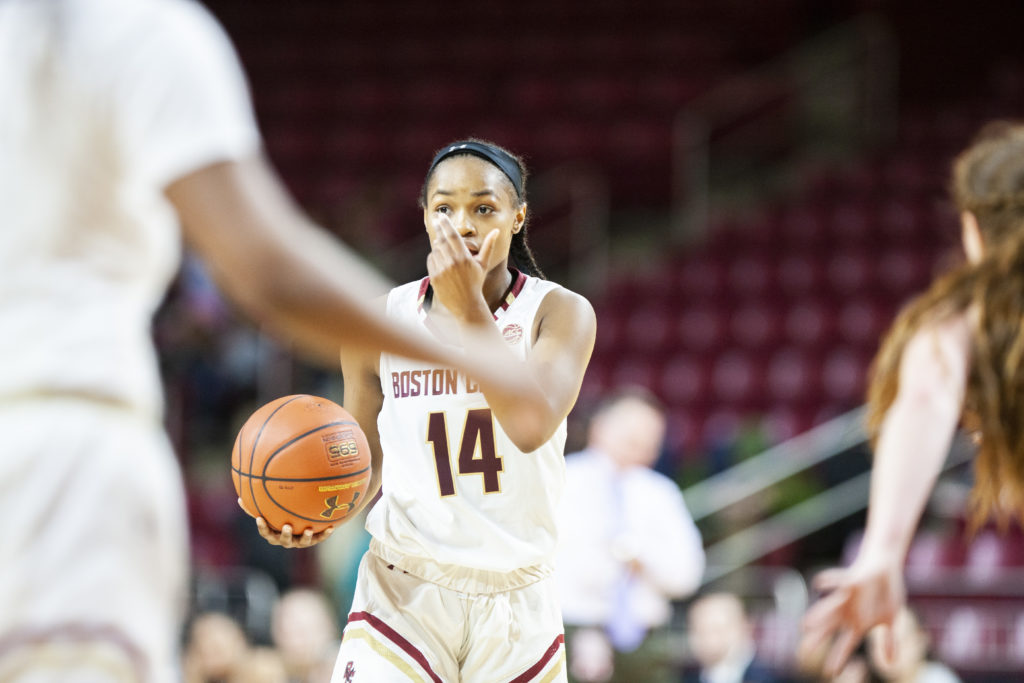 Fourth Quarter Surge Lifts BC Over Houston for Fourth-Straight Win

Boston College women’s basketball had been quite efficient in its first three games under new head coach Joanna Bernabei-McNamee. The Eagles recorded 80-plus points and outscored their opponents by 20 or more in each outing, a particularly impressive stretch considering they never crossed the 80-point threshold the season prior. On Sunday afternoon against Houston, BC didn’t play the efficient, high-scoring basketball that it did in its first three games of the season, but the Eagles still escaped with a 64-57 victory on the strength of a 20-point fourth quarter that allowed them to pull away in what had been a tie game through 30 minutes.

Emma Guy once again turned in a strong effort for BC (4-0) in the scrappy affair, picking up 16 points and eight rebounds. After chipping in 19 points against Holy Cross, Marnelle Garraud once again led the team in scoring with 17.

In last year’s meeting with Houston (2-3), the Eagles prevailed by a narrow five-point margin. So, it was clear that the Cougars would put up a much tougher fight than other teams that BC had faced this season.

The first quarter set the tone for this matchup—it would be a scrappy slugfest filled with turnovers. The Eagles shot 33 percent from the field, while the Cougars only hit 28 percent of their shots, and both teams also combined for 12 turnovers. BC emerged with a 12-11 lead in the first 10 minutes of play.

Each team was able to somewhat shake off their slow starts in the second quarter, as the mistakes diminished and more shots fell. The Eagles were the hotter of the two and outscored the Cougars, 21-14, to enter halftime with an eight-point lead. There were still several glaring statistics to note. By halftime, BC had only gone to the charity stripe once, and it did not make a single free throw. And with five minutes left to play in the half, Houston had only recorded one assist. Despite the number of turnovers that they were generating, the Cougars were not producing many points on the break.

It looked as if the Eagles would pull away and cruise to an easy victory in the beginning of the third quarter. They scored four points to open up the half and put themselves up by 12. The Cougars were falling out of the game, and they desperately needed a response.

Houston responded, loud and clear. Led by Jasmyne Harris and Serithia Hawkins, the Cougars rattled off a 14-0 run over a stretch of four minutes and took their first and only lead of the game, 39-37. Despite the back-and-forth nature of this contest, BC possessed the lead for the entire game up to this point. This startling run woke up the Eagles, and they battled their American Athletic foe to tie it up at 44 apiece, heading into the fourth quarter.

BC was able to finish strong, though, starting the quarter with five-point run. From this point forward, the Eagles would not relinquish their lead. While the Cougars did close the margin to only a one-point deficit with three minutes left to play, Harris—who had racked up 15 points—ended up fouling out. BC was able to hold on and make its free throws to build up a comfortable lead. In the final three minutes without Harris, Houston’s offense ended up collapsing as it continuously heaved 3-pointers, none of which landed. The Cougars only scored a single point in the final three minutes, and thus BC escaped its first true road test—Houston was a much tougher foe than nearby Rhode Island.

Some had projected this game to be a potential shootout, but that didn’t come to fruition. Both teams didn’t shoot the ball very well, as BC shot 37.5 percent from the field, while Houston shot a similarly poor 34.3 percent. The Eagles and Cougars combined to turn the ball over 50 times, and Houston even recorded three more steals than assists. BC came into this game having found plenty of success on the glass, but Houston gave it a run for its money, as it slightly exceeded Bernabei-McNamee’s team in rebounds by one. Hawkins contributed all over the court for Houston in the loss, as she led her team by posting a double-double with 17 points and 11 rebounds while also snagging four steals.

Houston did a great job in slowing down BC’s offense, but the Cougars’ kryptonite was their 3-point shooting. The Eagles converted 7-of-15 from beyond the arc, with a large portion of their high success rate coming from freshman guard Marnelle Garraud, who knocked down four long-range shots. The Cougars, meanwhile, hit just 4-of-24 from downtown—good for an abysmal 16.7 percent clip. One has to credit BC’s stout perimeter defense, but Houston has been quite poor at shooting 3-pointers, as it entered this game shooting just 25 percent from distance.

Ultimately, a great team is able to grind out gritty games and come away with a win. In the end, BC accomplished that. While this effort was not as smooth as the Eagles’ previous three games, they still preserved an undefeated record and survived a second-half comeback.

BC will now depart Houston for Philadelphia to play in the St. Joseph’s Tournament. While this Eagles team has a first-year coach and not a single senior on the team, it has been playing smart, mature basketball. Despite being held to their lowest scoring total of the season, the Eagles were still able to grind out a win—something that signals the potential for a turnaround season.